There’s a new teen app sensation. Anonymous question-asking app YOLO has rocketed to the #1 US app position just a week after launching thanks to Snapchat. Built on top of the Snap Kit platform, YOLO uses Snapchat for login and Bitmoji profile pics to let you add an “ask me anything” sticker to your Snapchat Story. Friends can swipe up to open YOLO on iOS and send an anonymous question there that you then answer through another sticker posted to your Story. One source says “EVERYONE at my high school is using it right now.” And what’s crazy is that YOLO’s inventor tells me the whole thing was an accident.

If you’re getting deja vu, you might be thinking of Sarahah. That app blew up in late 2017 by letting you attach a link from your Snapchat Story to your Sarahah profile where people could ask you anonymous questions…until it was kicked off of iOS and Android in early 2018 for facilitating bullying. Or maybe you’re thinking of how polling app Polly let Snapchat friends ask you anything before there was Snap Kit.

Now the question is whether YOLO’s warning during signup that it has “no tolerance for objectionable content or abusive users” or its in-app flagging and blocking features will protect it from teen misuse or Apple and Google’s wrath. 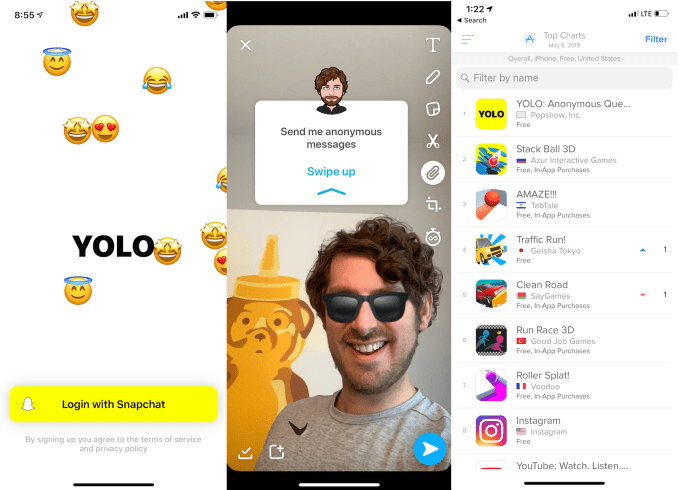 YOLO’s rise highlights just how curious teens are and how desperate they can be for honest feedback or anonymous gossip. Given the prompt via Snapchat to say something to friends without having to take responsibility, kids are flocking to download YOLO. Since they don’t have to create a new profile or pic thanks to Snap Kit importing their account and Bitmoji, and can use Snapchat’s ubiquity amongst teens to distribute their question and answers, YOLO is super easy to join. That pushed it to the #1 US app according to App Annie. 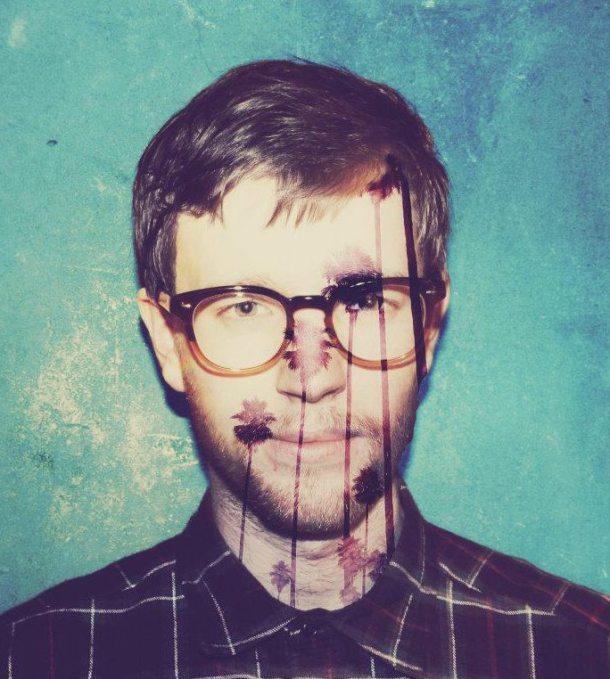 But as with Sarahah, Secret, YikYak, and other anonymous apps before it, YOLO is vulnerable to being used to spread hate speech and bullying. Given school-age kids can get in trouble for insulting someone in the hallway, they’re quick to torment peers though apps, especially if they piggyback on one everyone already uses.

Now Yolo’s developer, a startup called Popshow, is desperately trying to keep the app’s servers from melting and add new features so teens stick around. There was no publicly available info about who started Popshow, even in its trademark and incorporation filings. But after some digging, a source revealed that Popshow and YOLO were started by Gregoire Henrion, former co-founder and CEO of music video making app Mindie.

“It was not supposed to be a success. It was just for us to learn” Henrion tells me in his first interview about his startup. “Let’s just put it on the App Store and see how people behave. It went 100% viral. It’s crazy. Even we didn’t believe our eyes when we saw that [it went to #1].”

Henrion’s previous startup Mindie had let you share soundtracked video clips to your Snapchat story. It raised $1.2 million from Lowercase, SV Angel, Dave Morin, Troy Carter and more. But in 2015 it got blocked from Snapchat for being a security risk since it required users to provide their Snap username and password. YOLO actually takes advantage of Snapchat’s Snap Kit platform that was designed specifically to eliminate the need for Mindie’s sketchy integrations. Mindie missed its opportunity to become Musical.ly, which was later bought and merged into global phenomenon TikTok. Mindie eventually got acquired by Justin Bieber-backed selfie app and content production collective Shots in 2016.

By 2017, Henrion and Mindie co-founder Clément Raffenoux were back building a new startup. They raised a small pre-seed round from SV Angel, Shrug Captial, Product Hunt’s Ryan Hoover, and some angel investors and experimented with the Popshow video reactions app. Then the pair decided to explore the anonymous app space. But rather than being completely anonymous and public, YOLO lets users privately review questions, decide which they want to answer and who to share that content with via Snapchat, and include a selfie when they share so respondents know there’s a real person on the other side. “We feel that anonymity can unlock super good behaviors. We think we’re more empathic, more human than other anonymous apps before us” Henrion explains.

The result was “1000X what we expected” Henrion beams. And he insists the growth is totally organic. “We tried some shitty things just to try them, but they don’t work” including replying from Popshow’s account to thousands of people who tweeted ‘I miss Vine’. “I don’t believe in fake growth anymore. We just literally put it in the store, people typed YOLO into search, and the loop was so effective that the product caught on.” 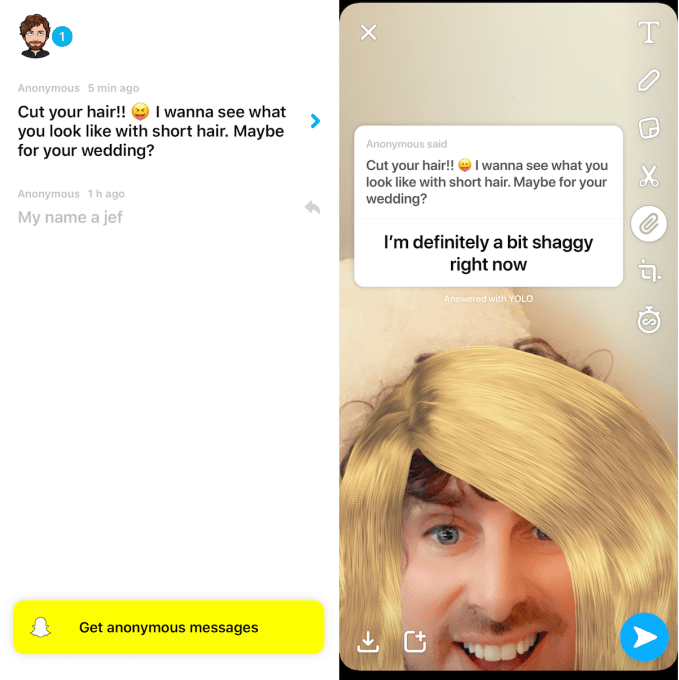 YOLO lets you ask for anonymous questions via your Snapchat Story, receive them on YOLO, and then post the answers back to Snapchat

The challenge will be maintaining YOLO’s momentum. Another anonymous Q&A app called TBH raced to the #1 app spot in September 2017, got acquired by Facebook 3 weeks later, but fell out of the top 500 apps by the end of November before being shut down last year. Teens are extremely fickle. If they deem YOLO “over”, get bored due to a lack of new features, are overwhelemed by harassment, or a new fad arises, it could crash out of the charts. Henrion says his team is scrambling to evolve YOLO into something more expansive without losing simplicity, while developing automated tools to weed out bullies.

There’s also the threat of Snapchat just building similar anonymous Q&A functionality into its own app. But that’s the risk of building atop any platform that otherwise massively reduces an app’s development and marketing costs. This will become a powerful case study that will surely draw tons of developers to Snapchat’s platform. With so much of YOLO powered by Snap Kit, and it all just being an experiment, Henrion won’t lose much if his app dies and he moves on to the next idea.