A majority of U.S. teens are taking steps to limit smartphone and social media use

It’s not just parents who are worrying about their children’s device usage. According to a new study released by Pew Research Center this week, U.S. teens are now taking steps to limit themselves from overuse of their phone and its addictive apps, like social media. A majority, 54% of teens, said they spend too much time on their phone, and nearly that many – 52% – said they are trying to limit their phone use in various ways.

The fact that older children haven’t gotten a good handle on balanced smartphone usage points to a failure on both parents’ parts and the responsibilities of technology companies to address the addictive nature of our devices.

For years, instead of encouraging more moderate use of smartphones, as the tools they’re meant to be, app makers took full advantage of smartphones’ always-on nature to continually send streams of interruptive notifications that pushed users to constantly check in. Tech companies even leveraged psychological tricks to reward us each time we launched their app, with dopamine hits that keep users engaged.

Device makers loved this addiction because they financially benefited from app sales and in-app purchases, in addition to device sales. So they built ever more tools to give apps access to users’ attention, instead of lessening it.

For addicted teens, parents were of little help as they themselves were often victims of this system, too.

Today, tech companies are finally waking up to the problem. Google and Apple have now both built in screen time monitoring and control tools into their mobile operating systems, and even dopamine drug dealers like Facebook, Instagram and YouTube have begun to add screen time reminders and other “time well spent” features.

But these tools have come too late to prevent U.S. children from developing bad habits with potentially harmful side effects. 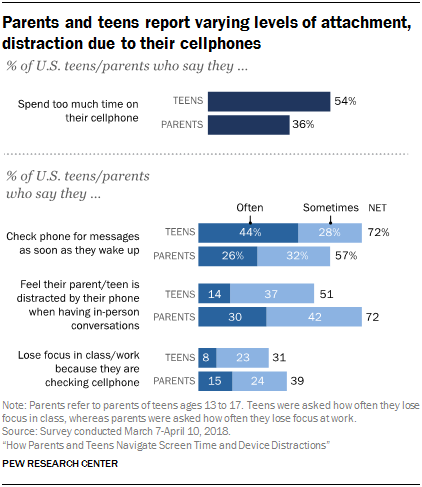 Pew says that 72% of teens are reaching for their phones as soon as they wake up; four-in-ten feel anxious without their phone; 56% report that not have their phone with them can make them feel lonely, upset or anxious; 51% feel their parents are distracted by phones during conversations (72% of parents say this is true, too, when trying to talk to teens); and 31% say phones distract them in class.

The problems are compounded by the fact that smartphones aren’t a luxury any longer – they’re in the hands of nearly all U.S. teens, 45% of whom are almost constantly online.

The only good news is that today’s teens seem to be more aware of the problem, even if their parents failed to teach balanced use of devices in their own home. 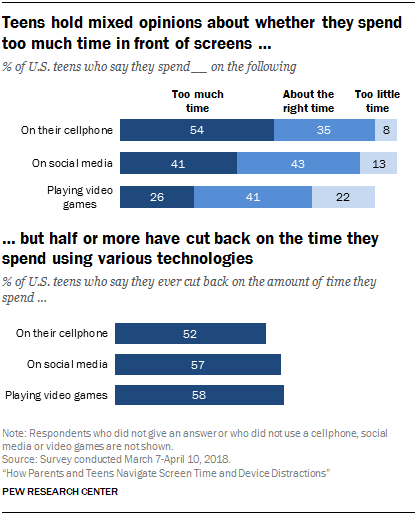 In addition, some parents are starting to take aim at the problem, as well, with 57% reporting they’ve set some screen time restrictions for their teens.

Today’s internet can be a toxic place, and not one where people should spend large amounts of time.

But many of these networks were built by young men who couldn’t conceive of all the ways things could go wrong. They failed to build in robust controls from day one to prevent things like bullying, harassment, threats, misinformation, and other issues.

Instead, these protections have been added on after the fact – after the problems became severe. And, some could argue, that was too late. Social media is something that’s now associated with online abuse and disinformation, with comment thread fights and trolling, and with consequences that range from teen suicides to genocide.

If we are unable to give up our smartphones and social media for the benefits they do offer, at the very least we should be monitoring and moderating our use of them at this point.

Thankfully, as this study shows, there’s growing awareness of this among younger users, and maybe, some of them will even do something about it in the future – when they’re the bosses, the parents, and the engineers, they can craft new work/life policies, make new house rules, and write better code.

Source: Tech Crunch Social
A majority of U.S. teens are taking steps to limit smartphone and social media use