At Facebook’s 2019 F8 developer conference, the company announced plans to introduce desktop apps for its popular communications app Messenger. Now, less than a year later, the Messenger Mac App is beginning to roll out. Though not yet available in the U.S., Messenger for Mac has popped

For the first time in eight months, people in Kashmir can use WhatsApp, Facebook, Twitter and other social media services without any fear or use of specialized software — though things are not back to normal yet. India said on Wednesday that it has temporarily lifted the

Twitter starts testing its own version of Stories, called ‘Fleets,’ which disappear after 24 hours

Twitter is testing its own version of Stories. The company announced today it will begin to trial a new sharing format called “Fleets,” starting in Brazil, which will let users post ephemeral content to its social network for the first time. Unlike Tweets, Twitter’s new Fleets can’t

VSCO, a popular photo editing app (and Gen Z meme), is continuing to shift its focus to video. Last month, the company finally gave its creators the ability to publish their video edits to the VSCO feed alongside their photos. And today VSCO is rolling out a

Bookshlf has created a new way for people to recommend media — whether it’s music, videos, articles, podcasts or even tweets — to their friends and to the rest of the world. The New York-based startup is officially launching its web and iOS app this week and

How to Use Instagram Stories for Market Research: 5 Ideas for Marketers 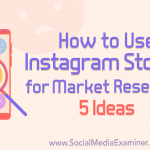 Looking for new ways to conduct market research? Wondering how to get feedback from your highly engaged Instagram followers? In this article, you’ll learn how to use five Instagram Stories features to gather valuable feedback. Why Gather Consumer Feedback via Instagram Stories? Businesses know that making customers

Who fact-checks the fact-checkers? Did Trump call coronavirus the Democrats’ “new hoax”? Those are the big questions emerging from a controversial “false” label applied to Politico and NBC News stories by right-wing publisher The Daily Caller. Its Check Your Fact division is a Facebook fact-checking partner, giving

Finally dark mode arrives to soothe your 3am WhatsApps

Facebook -owned WhatsApp is finally giving users’ eyes a break by rolling out a dark mode setting to the messaging app — years after some other tech giants figured out how to offer a “dimmer pixels” switch. The messaging giant says the feature is rolling out globally

How to Analyze Your LinkedIn Ad Performance

Are you running LinkedIn ads? Wondering how your ads are performing against industry standards? In this article, you’ll discover how to assess your LinkedIn ad campaigns. 4 Important LinkedIn Ad Metrics Explained One of the biggest challenges with running LinkedIn ads is knowing whether your performance measures