Deci, a startup company with 50 employees who are developing a platform to build and optimize AI-powered systems, today announced that it closed a $25 million Series B financing round led by Insight Partners with participation from Square Peg, Emerge, Jibe Ventures, Fort Ross Ventures, and ICON that brings the company’s total raised to $55.1 million. The funds will be used to expand Deci’s go-to-market activities as well as support the company’s R&D efforts, according to co-founder and CEO Yonatan Geifman.

Companies face several hurdles in creating text-, audio- and image-analyzing AI models for deployment across their apps and services. Cost is an outsize one — training a single model on commercial hardware can cost tens of thousands of dollars, if not more. While newer generations of chips and custom-designed AI accelerators have helped to reduce the burden somewhat, creating a model from scratch is still no easy feat.

Geifman proposes neural architecture search (NAS) as a solution. NAS, a family of techniques on which Deci heavily relies, can help automatically discover low-cost, optimal models for a given problem. Deci isn’t unique in this — Google’s Vertex AI service leverages NAS to optimize the performance of models on specific, customer-specified tasks. But Geifman argues that Deci’s platform offers access to NAS capabilities at a lower cost.

In 2019, Geifman co-founded Deci alongside Ran El-Yaniv and entrepreneur Jonathan Elial. Geifman and El-Yaniv met at Technion’s computer science department, where Geifman was a PhD candidate and El-Yaniv a professor.

“Deci’s proprietary technology [can generate] new image classification models that … deliver more than 2x improvement in runtime, coupled with improved accuracy, as compared to the most powerful models publicly available,” Geifman told TechCrunch in an email. “This means that AI applications that previously could only be deployed on large and expensive GPUs can now be deployed on CPUs.” 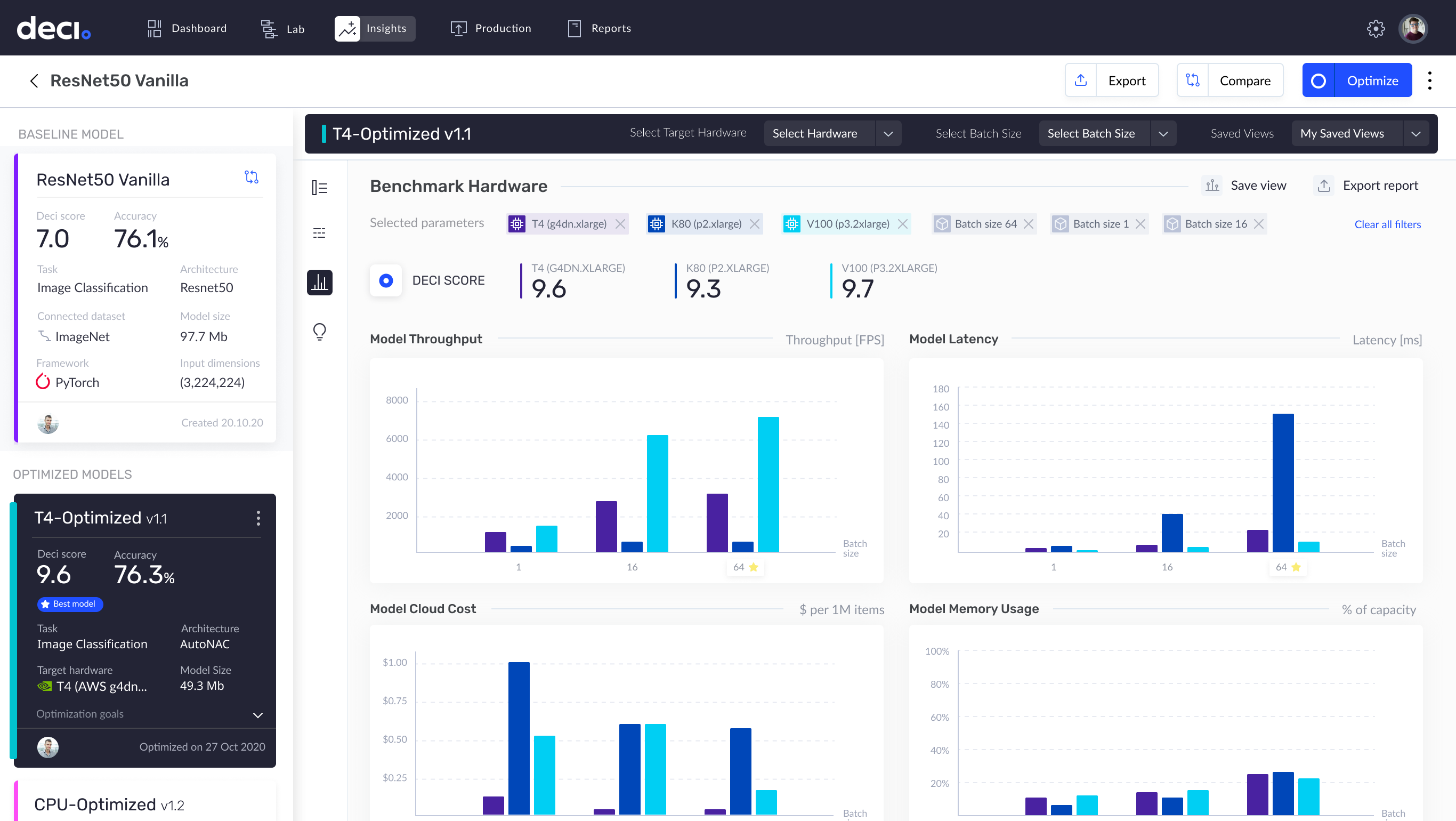 Those are lofty claims. But Deci has the backing of Intel, which last March announced a strategic business and technology collaboration with the startup to optimize machine learning on Intel processors. The partnership led to the creation of a model that accelerates question-answering tasks’ performance on Intel CPUs and an image classification model for Cascade Lake processors that “significantly reduces compute overhead,” Geifman claims.

Geifman previously told TechCrunch that one of Deci’s customers, a videoconferencing provider, used the platform to roll out a feature that blurs backgrounds on users’ devices. Others have tapped Deci to build better models for their own internal computing, even when they theoretically have the GPUs and compute power on hand to run anything.

“Deci was created to empower developers and eliminate production-related bottlenecks across the AI lifecycle,” Geifman said. “The business impact of this ability translates into … shortening time to production and the ability to unlock new AI use cases and address new market segments on resource-constrained devices.”

Geifman also notes that compressed models can help companies save on inference compute costs — that is, the costs of actually serving models once they’ve been deployed. Owing in part to the popularity of hosting models in the cloud, over a third of businesses regularly have cloud budget overruns of up to 40%, according to a poll by observability software vendor Pepperdata.

While Geifman asserts that Deci’s business continues to grow, the startup faces challenges, including the technical limitations of NAS. (NAS, which is difficult to evaluate, can be expensive and time-consuming.) Moreover, Deci also competes with a number of companies developing ways to make models more efficient, like OctoML, Neural Magic and OmniML.

The coming months will be a test of Deci’s robustness to headwinds.

“While we cannot disclose the valuation, we can say it increased significantly when compared to the previous round. Due to the growth in Deci’s business and the product expansion opportunities into additional domains such as natural language processing, among others, our existing investors decided to double down to support that growth,” Geifman said. “We haven’t seen a major impact [from recent economic developments]. Our focus has largely been on enterprise, while the slowdown has mainly affected mid-market companies and startups.”

Insight Partners managing director Lonne Jaffe, a board member at Deci, added in an email with TechCrunch: “Deci’s powerful technology lets you input your AI models, data, and target hardware — whether that hardware is on the edge or in the cloud — and guides you in finding alternative models that will generate similar predictive accuracy with massively improved efficiency … [It’s a value add because] having a more efficient infrastructure for AI systems can make AI products qualitatively different and better, not only cheaper and faster to run.”