Everyone is scrambling to build a Clubhouse clone right now, but for Discord it makes perfect sense.

With everyone stuck at home searching for safe ways to rekindle their social lives over the last year, Discord’s appeal exploded. The company cites new behavior it observed during the pandemic as the inspiration for Stage Channels, a new feature that will facilitate more structured voice chats with designated speakers and listeners.

Voice chat is already Discord’s core feature. It’s been that way for years, offering gamers a crystal clear, seamless voice chat service that blew the functionality of in-game chat services out of the water. But there’s no denying the Clubhouse-inspired voice event zeitgeist at the moment, even if ultimately Discord was there first in many ways. 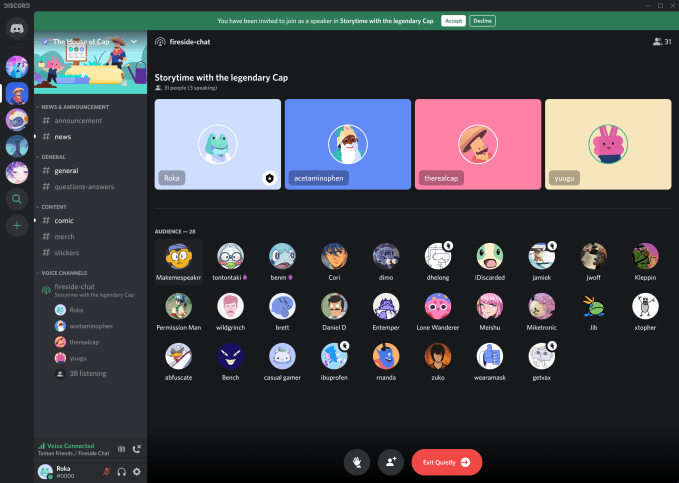 Discord says the new kind of channel will be useful for stuff like voice-based AMAs and interviews, book clubs and even karaoke. The new channels will capture activity that’s already happening on Discord, making it way easier for anyone who runs a server to host formalized conversations without needing to mess around with a bunch of granular user permissions stuff.

The new channel type fits right in with Discord’s existing vibe. Stage Channels do what’s on the label, allowing anyone who runs a Discord to curate a speaker experience and use moderator tools to control who gets the mic and when. Much like Clubhouse (or Zoom), participants can raise their hand to speak. They can also slink out quietly. 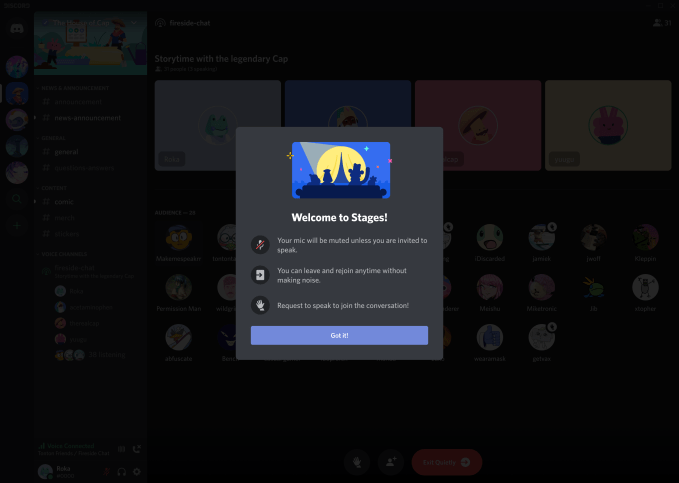 Stage Channels will be specific to community servers, which are geared around larger groups on Discord. To enable the new kind of channel, server owners will need to convert a channel to a community server if it isn’t one already.

Because Discord is Discord, discovery for voice-based events won’t work like it does on Clubhouse, which serves up user-created live events front and center to anyone who opens the app. Community servers on Discord can apply to be featured in the server discovery menu, but the app’s focus remains on private, intimate groups and larger interest-based communities that you’re already a part of.

LinkedIn confirms it’s working on a Clubhouse rival, too

Given its healthy user base and existing utility as the go-to app for casual, seamless voice chat, Discord is well positioned to capture a completely different market for voice-based events. The app is a mainstay of the gaming community and generally skews young, putting it in contrast with the entrepreneurs, VCs and brands that flocked to Clubhouse’s early buzz.

Discord’s gaming DNA isn’t holding it back. In recent years, Discord has grown beyond its gaming roots without betraying them, expanding into a seamless chat experience for everything from college study groups to influencer fan hubs. Last year, Discord doubled its valuation within six months. Just a quarter later, Microsoft is reportedly in talks with the company on a $10 billion deal.

Slack wants to be more than a text-based messaging platform