Employee benefits platform Ben today announced it has raised $16 million in a series A round of funding led by European VC giant Atomico.

While salary is undoubtedly the main draw in a company’s compensation offer, additional “perks” can help sweeten the deal for current or would-be employees — this could be anything from gym subsidies or an ebike subscription, to meal allowances and mental wellbeing support. But curating and bundling all these various benefits is a massively resource-intensive endeavor, something that Ben is setting out to solve.

Founded out of London in 2019, Ben is a SaaS platform that offers core employment benefits such as life insurance, health, and pension, as well as more lifestyle-based nice-to-haves such as gym memberships and work-from-home allowances.

While Ben is aimed at the human resources (HR) realm, it essentially straddles both the HR and fintech divide, integrating with systems spanning accounting, HR, and payroll to automate many of the onboarding and enrolment processes. Through the platform, employers can set budgets and spend controls for each worker’s perks, as well as facilitate the entire payments process to the service provider. On top of that, Ben can also issue Mastercards that each employee can use on whatever perks they want within the limits stipulated by the company.

“What was once a huge burden for HR teams to compile and manage is now collated and presented through the Ben platform,” Ben cofounder and CEO Sebastian Fallert explained to TechCrunch. “This both expands choice greatly while also minimizing time-consuming admin.” 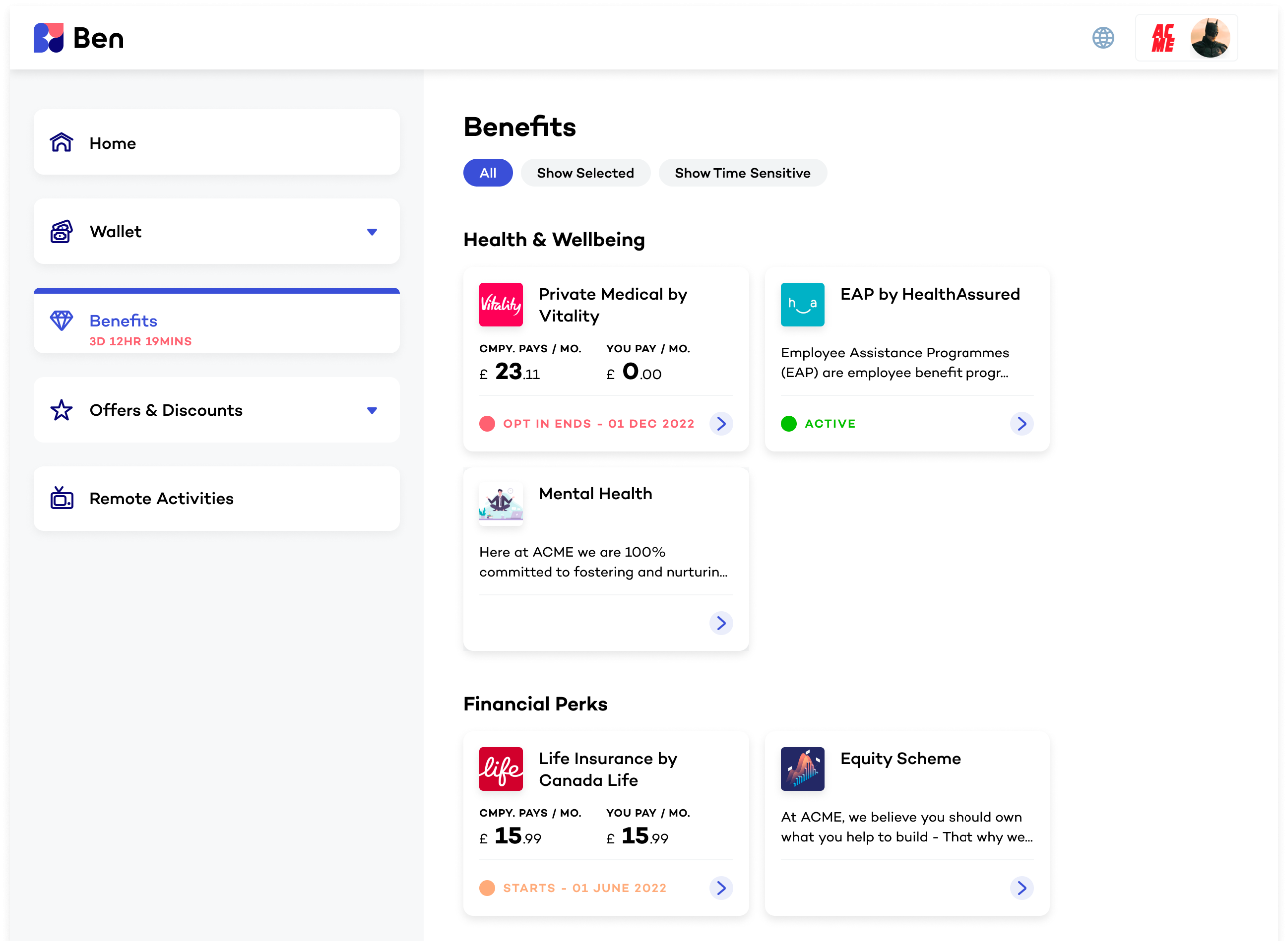 A quick peek across the employee benefits’ landscape reveals a number of similar companies, including Forma which recently announced a $40 million series B round of funding back in March, while London-based Juno secured a $4 million round.

Ben, for its part, is pitching its “end-to-end flexibility” and comprehensiveness of its benefits as one of its core differentiators, spanning regulated “core” (e.g. life insurance and pensions) products and lifestyle (e.g. gyms) perks.

“On the ‘core’ front, we’re able to provide country-specific coverage through our global broker network and enrolment technology,” Ben cofounder and COO David Duckworth said. “This is important, so companies always get the best combination of coverage and price. On the lifestyle front, we have relationships with benefits suppliers and can enable spend controls on the Ben Mastercard to turn any merchant into a benefit, including spending Lifestyle budgets on core products.”

On top of that, Duckworth also pointed to the fact that Ben is an “open” platform that isn’t locked into a set range of benefits.

“Companies are not limited to specific providers and can bring their own providers and broker relationships, while Ben takes over the ongoing administration,” he said.

It’s also worth noting that a key premise behind the “extensiveness” and flexibility of the benefits on offer is that different people have different needs, depending on a multitude of factors — including their age.

“This is the first time in history that four generations coexist in the workforce at the same time,” Fallert added. “Baby Boomers, Generation X, Millennials, and Generation Z participate in a complex global economy, and their benefit requirements vary and fluctuate. Companies, many of whom are spending around 33% of payroll on benefits, are reassessing their traditional benefits packages to fit more culturally and ethnically diverse teams distributed around the world.”

In an environment that includes an ongoing talent shortage and the so-called great resignation, it’s clear that there is perhaps a growing demand for technologies that help to attract and retain workers. And, in fact, lead investor Atomico has a decent track record in backing companies aligned with the space, including Peakon which exited to Workday in a $700 million deal last year; JobandTalent, which attained  a $2.35 valuation last December; and Gympass, which most recently hit a $2.2 billion valuation.

Ben had previously raised a $2.5 million seed round of funding, and with another $16 million in the bank the company is now well-financed to solve the benefits complexity problem for SMEs and enterprise clients alike. And in the three years since its foundation, Ben has already secured a number of sizeable customers, including Zalando, Deliveroo, Funding Circle, and BitPanda.

“Employees are looking for more choice in what benefits they would like and it’s in the interest of employers to be flexible, but until now it’s been complex and costly,” Fallert said.

Aside from lead backer Atomico, Ben’s series A round also included investments from Cherry Ventures, DN Capital, Seedcamp, and founders and executives from notable fintech / HR companies including Peakon, Remote, and Personio.