While mainstream social networks like Facebook and Instagram have had their services blocked by state authorities in Russia in recent days, as the Kremlin seeks total control of the narrative around the war in Ukraine, Reface, a Ukraine-based face-swapping app, has voluntarily pulled its app out of Russia.

After Putin ordered his troops to invade Ukraine late last month, the startup took an early decision to try to use its app as a conduit to circumvent the Kremlin’s media censorship — pushing anti-war messaging at users, along with calls to support sanctions against Russia and imagery of the devastation being wreaked on Ukraine. Reface also geo-targeted messages at Russian users specifically — urging them to take to the streets to protest against the war.

The anti-war campaign resulted in millions of anti-war messages being served to Reface users in Russia. In a blog post today the startup says some 13 million anti-war push notifications were sent (it says its app had around 2 million accounts in Russia).

However the anti-war content caused an immediate — and, as it turned out, sustained — negative reaction from users in Russia who flooded the app with one-star reviews, as the below chart from its blog post indicates… 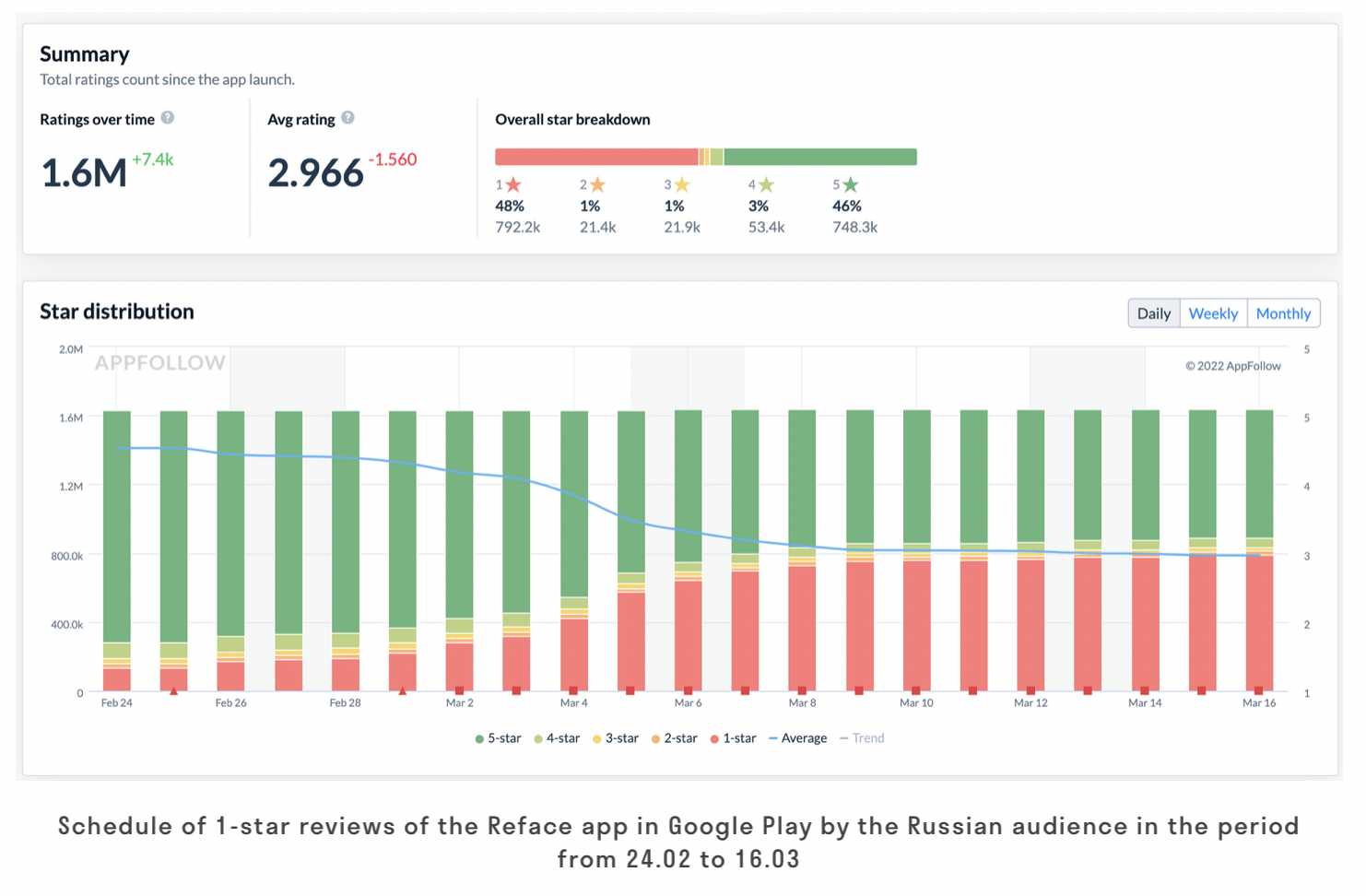 Reface’s blog says it’s interpreting the negative reaction of users in Russia as the “Russian audience couldn’t care less about the destroyed houses and women and children killed in Ukraine,” while noting there was some engagement that wasn’t entirely (or as) negative (but it says most was).

“Realizing that our efforts were not enough to compete with total state propaganda in Russia, we decided to remove the Reface app from Russian App Store and Google Play,” it writes. “Those who downloaded the application before March 10 will be able to use it. But new downloads and subscriptions are disabled.

“We don’t want to make any profit from the Russian market or associate with it in any way. Every person in Russia must feel the effects of sanctions and technological isolation due to the cruel war of their state against Ukraine,” Reface adds.

The startup’s CEO and co-founder, Dima Shvets, confirmed that the decision to pull its apps out of Russia was Reface’s alone.

“We have not been restricted [by Russia’s internet censor],” he told TechCrunch. “After the massive informational campaign we decided to quit, as don’t want to make anything in common with Russia.” 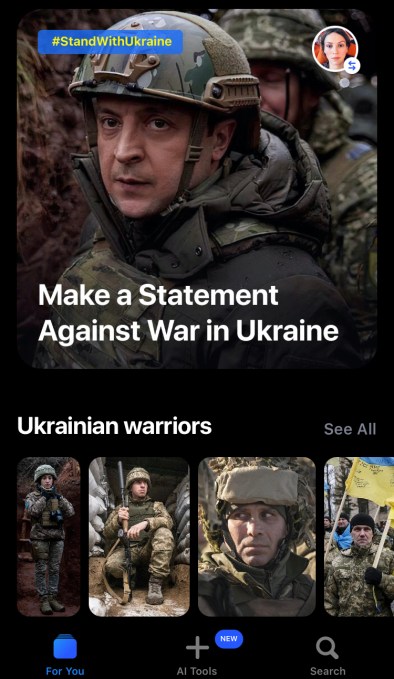 It’s another small sign of how the internet experience in Russia is becoming separated and segregated from the mainstream web — not just through the imposition of formal Western sanctions against Russian banks, named business execs and certain other entities in the country (such as the notorious Internet Research Agency troll farm), but via voluntary market exits from tech businesses, large and small.

While the AI-driven face-swapping effect that Reface’s app was built for was originally intended for pure entertainment — letting users visualize themselves as celebrities in famous movie scenes, for example — the advent of war in the Ukrainian team’s homeland has evidently — and markedly — shifted the context in which they feel comfortable operating.

“Earlier, Reface users entertained themselves by swapping themselves into Jack Sparrow and Iron Man. Now we encourage everyone to swap themselves into president Zelensky and animate photos with the Ukrainian anthem. Zelensky now has more Instagram followers than Kanye West. What a timeline!” is how Reface summarizes the changed consumer landscape in its blog post.

It is continuing to use its app to encourage support for Ukraine outside Russia — letting users face-swap into a selection of viral video clips of Ukraine’s president, Volodymyr Zelensky, or pick from images of Ukrainian soldiers uploaded by users.

It badges resulting pro-Ukraine synthetic media with the hashtag #StandWithUkraine — encouraging users to spread these visual messages of support to their social networks.

In another recent twist to this parallel infowar that’s being fought online alongside actual war on the ground in Ukraine, deepfakes of Ukraine’s president have appeared online to try to undermine the country’s war effort: In recent days a manipulated video falsely showing Zelensky surrendering was found circulating on social networks including Telegram, Facebook and the Russian rival, VKontakte.

It’s not clear where these fakes originated from — but, earlier this month, Ukraine’s Centre for Strategic Communications cautioned that Russia might deploy altered videos to try to manipulate public perception of its invasion.