Facebook will soon add labels to news outlets owned or otherwise controlled by a government, marking that information as, if not necessarily false or unreliable, at least worth considering the origin of. Those so labeled will also be banned from buying ads starting this summer.

The company announced its plan to do this a few months ago as one part of its ongoing “election integrity efforts,” along with such things as requiring a confirmed owner for pages and banning anti-voting ads.

Under the new policy, which should roll out to all users over the next week, news organizations “that may be under the influence of a government” will have a subtle but clear label as such, as will their posts. You can see what one of those labels looks like in the top image, and here’s how it would look in the “about” and details pages: 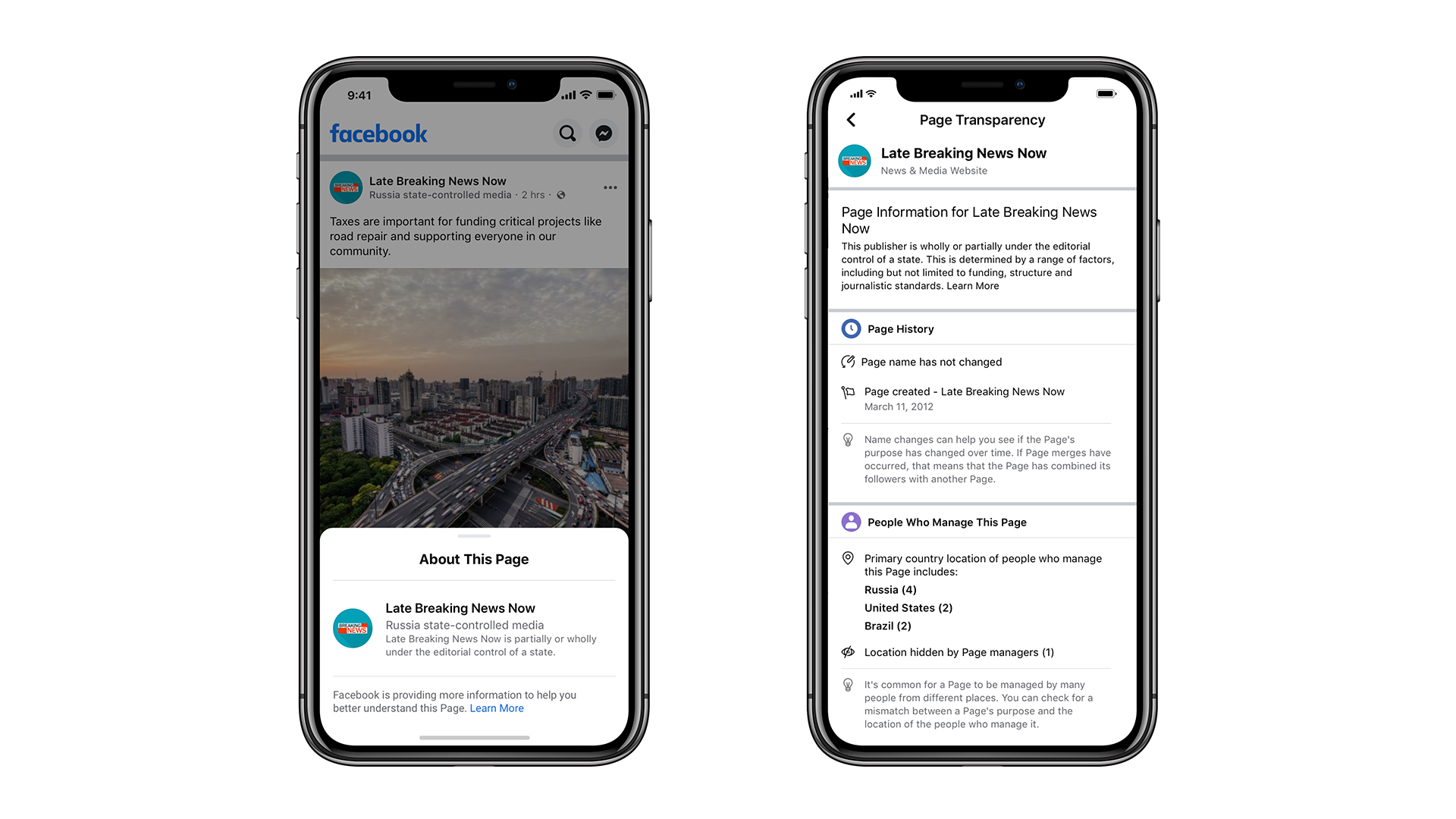 The warning reads: “This publisher is wholly or partially under the editorial control of a state. This is determined by a range of factors, including but not limited to funding, structure and journalistic standards.”

These organizations have immense reach even outside the countries they’re based in: Oxford’s Computational Propaganda Project has tracked this engagement and the strategies used to accomplish it closely in an ongoing series of papers.

The process of identifying state-run news is not quite as straightforward as it may seem. Certainly there are many openly state-run news organizations in many countries, like China Daily, Sputnik and so on. But governments may be pulling the strings behind far more, either by funding (or defunding) them, interfering with or directing editorial coverage or operating a whole news organization via unacknowledged means.

Facebook turned to experts to analyze and classify the many news organizations on the platform, which seems to have clearly advised that there are many factors that should be considered. As a result, Facebook bases its “state-controlled” label based on official statements, ownership structure and stakeholders, editorial leadership and guidelines, policies and oversight and, last but not least, the state of media freedom in the host country. Outlets can appeal the label if they think it has been applied in error.

Notably the label will not be applied to news posts or organizations that merely reference or base their reporting on state-controlled media. Nor is the information published by these labeled organizations subject to special scrutiny or fact-checking.

“Nevertheless,” writes the company’s cybersecurity policy head Nathaniel Gleicher in a blog post, “later this summer we will begin blocking ads from these outlets in the US out of an abundance of caution to provide an extra layer of protection against various types of foreign influence in the public debate ahead of the November 2020 election in the US.”

Outside the U.S. those ads will not be blocked, but they will be labeled.