Shareholders have repeatedly tried to oust Facebook’s chairman Mark Zuckerberg. The board has repeatedly rejected that demand. Outside investors are unlikely to get much help with that push from Facebook’s newest board member: Dropbox co-founder and CEO Drew Houston.

The addition of Houston is the first since the departure of Dr. Susan Desmond-Hellmann from the board in October. She was the lead independent director; that role remains empty. While the “independent” status relates to financial ties, business aside, Houston and Zuckerberg’s personal relationship might have complicated the storage startup leader assuming that position.

Zuckerberg and Houston have been close for eight years, appearing in photos together since at least 2012 when they rode around the exclusive Allen & Co Sun Valley conference together (seen above). A less flattering moment saw Zuckerberg and ex-Uber CEO Travis Kalanick celebrating Houston’s birthday at a “Babes & Balls” themed party at ping-pong bar Spin in San Francisco. 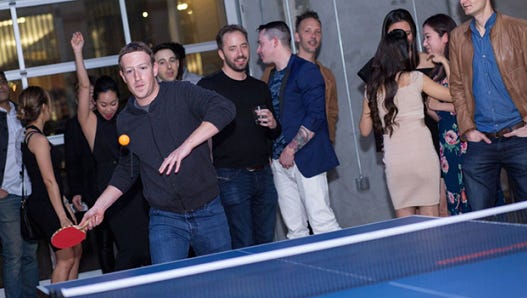 Mark Zuckerberg plays ping-pong at SPiN in San Francisco while Drew Houston (to his right) watches on. Image by via Ryan Soule of SPiN via USA Today

Houston has also found a mentor in Zuckerberg, who went through the trials of an initial public offering with Facebook a few years before Dropbox made the journey. Houston told Bloomberg in 2015 that “[Zuckerberg’s] given me a lot of advice just on company scaling, how do you organize people, how do you set up these systems.”

Houston is an accomplished technologist, graduating in computer science from MIT where he came up with the idea for Dropbox. As Facebook undertakes an integration of its messaging apps to expand end-to-end encryption, Houston’s guidance could serve the company well.

But given Dropbox has come under less scrutiny for its content moderation and impact on society, two issues constantly facing Zuckerberg and Facebook, he may have less to add on the topics than Desmond-Hellmann. She had been the CEO of the Bill & Melinda Gates Foundation philanthropy and the chancellor of University of California, San Francisco.

Facebook’s shareholders have multiple times proposed removing Zuckerberg from his role as chairman of the board, including in late 2018 and mid 2019. But the rest of the board have continued to support Zuckerberg, who has accepted blame for failing to emphasize safety earlier and warned of the current profit slowdown as Facebook invests in security and content moderation. Despite constant backlash and a rough reaction to its earnings last week, Facebook’s share price remains near its all-time high.

Those hoping for board members who will put more pressure on Zuckerberg may need to look toward who eventually fills the independent board director spot. Netflix CEO Reed Hastings, who was known to push back at Zuckerberg more than other members, left the board last year.

Facebook would benefit greatly from an independent board director with a healthy level of skepticism about how the social network impacts democracy, human rights and people’s attention. Zuckerberg and his inner circle are known as optimists who see the potential of technology to improve our lives. But Facebook has done a better job at fulfilling that opportunity than safeguarding against the side effects of connecting everyone — particularly those happy to exploit or degrade others out of greed for wealth or power. Facebook’s 2.5 billion users would gain more if its next board member had more perspective on the consequences of technology and the upheaval it can cause in developing nations around the world.