Are Americans ready to trust Facebook with their dating life? Barely more than a month has passed since the U.S. Federal Trade Commission fined Facebook a record $5 billion over its privacy lapses, and imposed a modified corporate structure to hold the company more accountable for its decisions over user privacy. In the wake of this historic action, Facebook’s brand-new dating product is today launching to all in the U.S., promising to leverage the company’s deep insight into people’s personal data to deliver better matches than rival dating apps like Tinder, Bumble, Match and others. 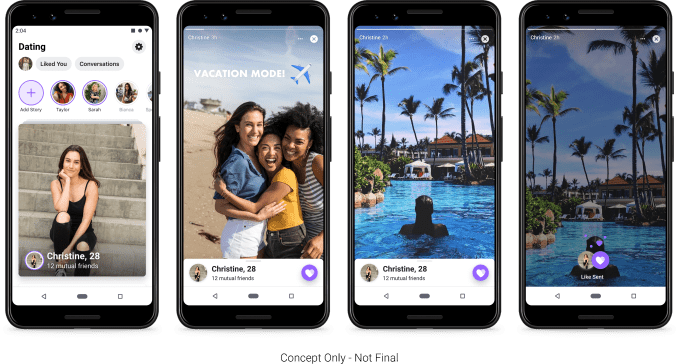 Though the U.S. is the 20th market for Facebook Dating, it’s one of the most important for the product, which was first announced at the company’s F8 developer conference last year.

The new service represents a significant step toward making Facebook a tool for connecting with people who aren’t just friends or family.

This is an area where the company is now heavily invested. The Facebook Groups product, used by a billion people on a monthly basis, connects users by similar interests or by geographic location, as with its neighborhood groups. The company also launched Facebook at Work a few years ago to allow businesses to build their own networks on top of Facebook infrastructure.

Arguably, none of these efforts require as much trust as opening up your Facebook data — to a company known for its mishandling — in the hopes of finding love. 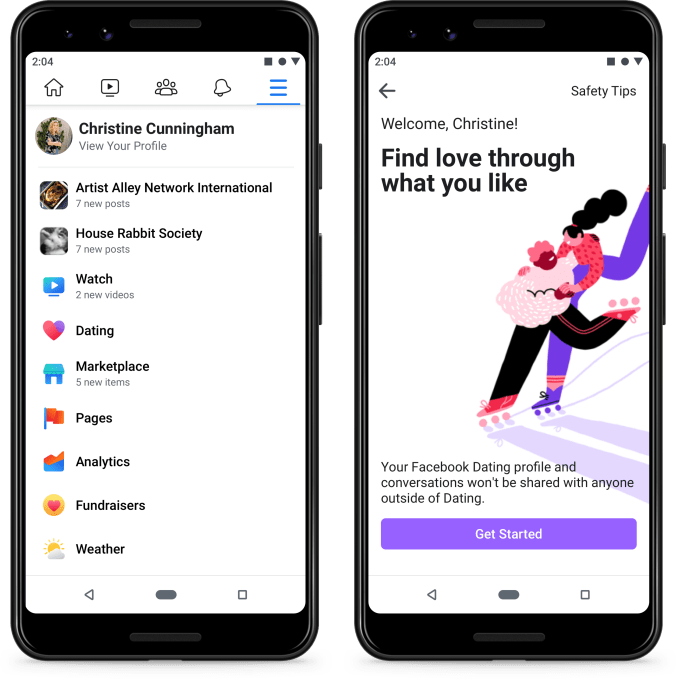 Facebook, well aware of the potential privacy pitfalls in such a product, has taken a number of steps to lock down the Facebook Dating experience so you’re not unwittingly outed to family or friends, or to work colleagues and other professional acquaintances. (Or, you know, to your spouse or significant other.)

For starters, the people you’re shown on Facebook Dating will not include your Facebook Friends. You can also opt to have Facebook Dating only show you those people where you don’t have any friends in common, for another layer of protection. And you can pre-emptively block people from seeing your profile on Facebook Dating — which may work well as a way to ensure an ex’s profile never, ever comes up and to make sure they never see yours.

And of course, Dating is an opt-in experience. 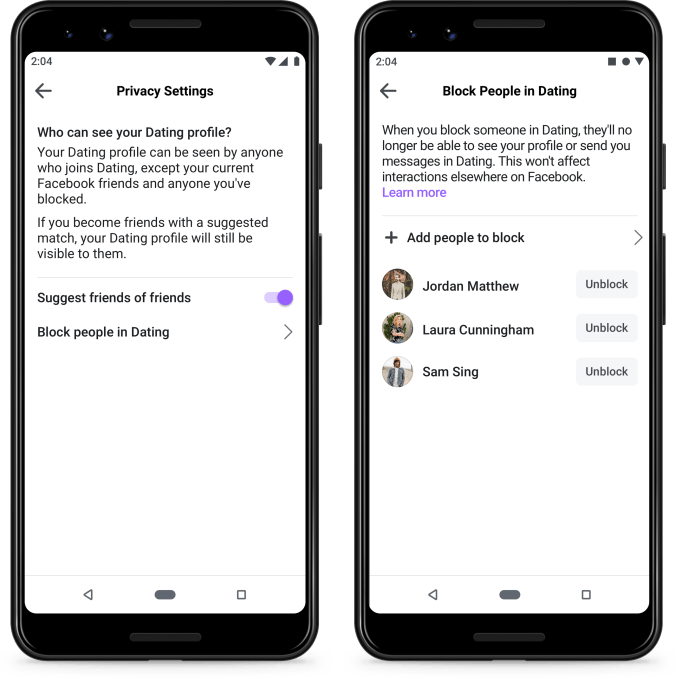 Your profile will never be visible to friends anywhere or to any people not on Facebook Dating, and it won’t appear in the News Feed. With the newly added Instagram integration, only your photos will be shown — not your Instagram handle.

However, there is still a way to add a Facebook friend as a “Secret Crush,” which will only be revealed if the interest is mutual. People are also limited to nine “crushes,” to prevent abuse of the feature. This now extends to Instagram followers, too, with the U.S. launch. 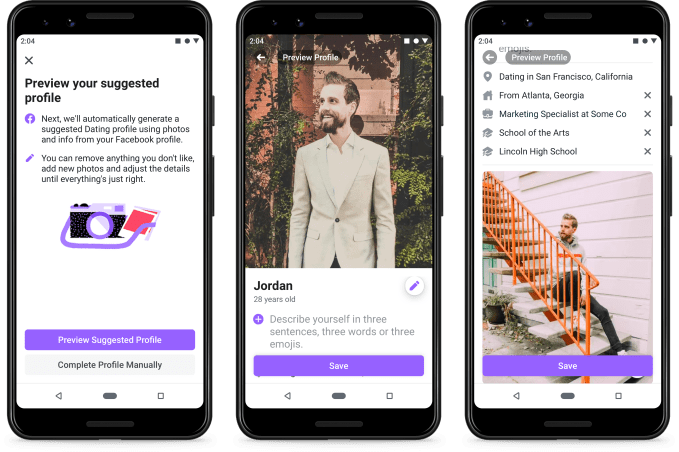 The product, which lives within the main Facebook app, also allows you to connect with people attending the same events or who participate in the same groups — though this is off by default and can be enabled on a one-by-one basis. 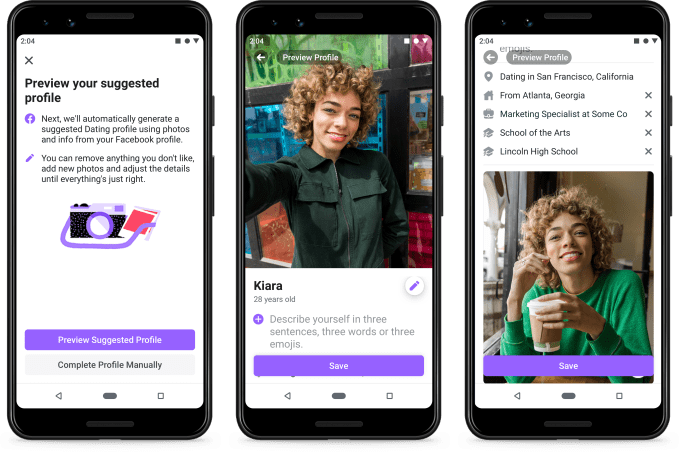 This is where things get tricky.

Facebook, of course, has been known to be eerily accurate with its friend recommendations — so much so that some people believed it had to have been spying on them. (As it turned out, Facebook did know more about who you were connecting with than people had realized.)

Officially, Facebook says that match suggestions are based on “your preferences, interests, and other things you do on Facebook.”

Asked how exactly Facebook will rank its profile suggestions, Nathan Sharp, the Product Lead for Facebook Dating, said he can’t discuss the details of the system.

“What I can say is that, in terms of privacy, none of the people you would see or encounter would be divulging any sort of information,” he explains. “So, if you and Taylor, for example, had gone to the same college, but you’d never posted that on your dating profile, you may be up-ranked. But Taylor would never see what college you went to and you would never see what college Taylor went to,” says Sharp.

Sharp notes that people may discover their mutualities — like sharing the same alma mater, for instance — naturally, through conversations had within Facebook Dating chat. Though it’s not unusual for a dating app maker to be tight-lipped about its secret sauce, the amount of data Facebook has to play with here is a competitive advantage and possibly a cause for concern as users are in control of what profile data Facebook is using behind-the-scenes.

On Tinder, you may write that you “love hiking,” but Facebook would know if you actually participated in hiking-related groups or events, and how often. It may know a lot more, too — like your check-ins to hiking trails, if there are mountains in your photos, if you posted updates with the keyword “hiking,” if you “Liked” Facebook Pages about hiking, etc. But Facebook won’t confirm if this sort of data is used or how.

If people can look past the uncertainty around Facebook’s use of their personal data — and that’s a huge unknown for the U.S. market — the product itself has several advantages.

Facebook Dating’s larger goal is to make matchmaking feel personal again. It aims to remind people there’s a real person behind these profiles. That dating is not meant to be a game. This could be a big differentiator from a market tired of but still committed to using dating apps.

The issue is that today’s dating apps aren’t incentivized to help people make long-lasting connections — after all, people who find a relationship abandon their dating service. That’s bad for the apps’ bottom line. What better, then, but to double down on the “single lifestyle,” as Tinder is now doing, to ensure users stick around?

Facebook, on the other hand, isn’t exactly worried about user churn. With the social network’s 2.4 billion monthly users, it has the bandwidth to make dating an additive feature. Its sheer numbers also mean the potential for a far larger pool of daters, including those who wouldn’t otherwise think to join a dating app.

Another advantage is that Facebook is a company that knows how to build a compelling user experience. It shines in the details on Facebook Dating — like how easily it flows you into a gender identification screen at setup, or how it gives you a way to quickly share your live location for first-date safety with a trusted friend on Messenger .

It’s cracking down on the sending of unsolicited photos and porn-bot spam that plague dating apps, by limiting chats to text and GIFs only. That means no links, photos, payments or videos can be shared in messages.

And when Story integration goes live by year-end, checking out daters’ less-polished updates may become a new favorite activity.

Finally, because its raison d’être is not (for now at least) direct monetization of core dating features — like messaging or returning to a profile you accidentally swiped past — Facebook can create a free product where you’re not limited by the app’s need to squeeze you for dollars. 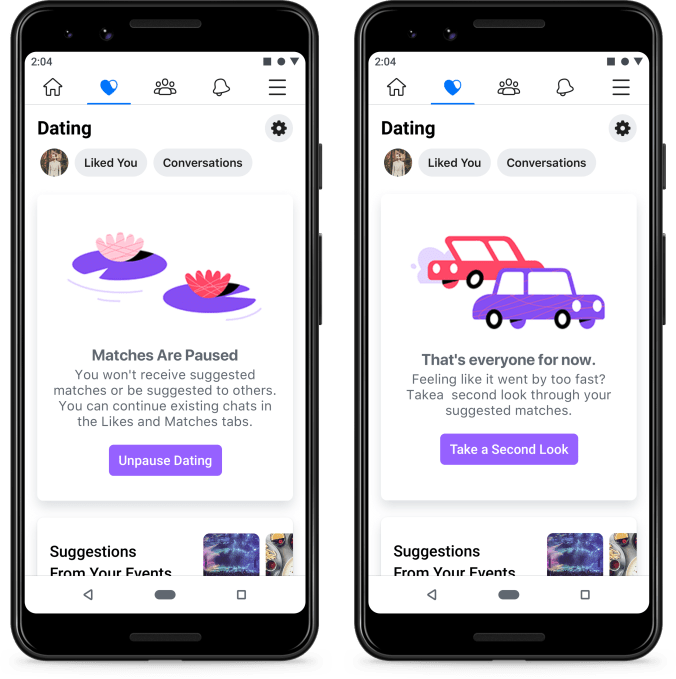 That said, the product can’t help but borrow from Tinder, with its set of rounded like/dislike buttons (why is there never a maybe?), photo-centric profiles that reward the genetically blessed, the integrated private chat and now Instagram integration, too.

In addition to the U.S., Facebook Dating is live already in Argentina, Bolivia, Brazil, Canada, Chile, Columbia, Ecuador, Guyana, Laos, Malaysia, Mexico, Paraguay, Peru, the Philippines, Singapore, Suriname, Thailand, Uruguay and Vietnam. It will be in Europe by early 2020.

The company won’t say how many users are on the Dating product so far, but claims it’s “doing well.”

Facebook Dating is rolling out to users 18 and over in the U.S. starting today.