Facebook this morning announced an expansion of its fact-checking program and other actions it’s taking to combat the scourge of fake news on its social network. The company, which was found to be compromised by Russian trolls whose disinformation campaigns around the November 2016 presidential election reached 150 million Americans, has been increasing its efforts at fact-checking news through a combination of technology and human review in the months since.

The company began fact-checking news on its site last spring, with help from independent third-party fact-checkers certified through the non-partisan International Fact-Checking Network.

These fact checkers rate the accuracy of the story, allowing Facebook to take action on those rated false by lowering them in the News Feed, and reduced the distribution of those Pages that are repeat offenders. 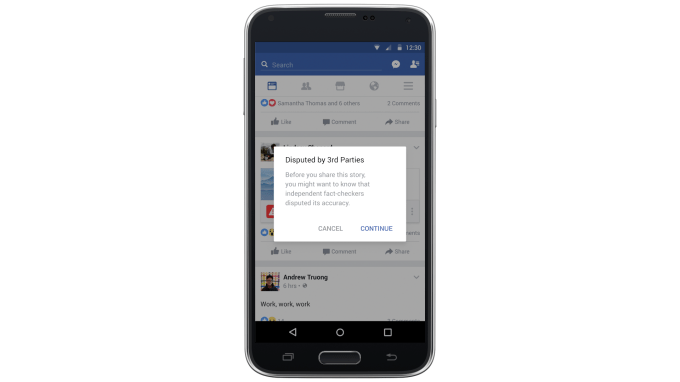 Today, Facebook says it has expanded this program to 14 countries around the world, and plans to roll it out to more countries by year-end. It also claims the impact of fact-checking reduced the distribution of fake news by an average of 80 percent.

The company additionally announced the expansion of its program for fact-checking photos and video to four countries.

First unveiled this spring, Facebook has been working to fact-check things like manipulated videos or misused photos where images are taken out of context in order to push a political agenda. This is a huge issue, because memes have become a popular way of rallying people around a cause on the internet, but they often do so by completely misrepresenting the facts by using images from different events, places, and times.

One current example of this is the photo used by Drudge Report showing young boys holding guns in a story about the U.S.-Mexico border battle. The photo was actually taken nowhere near the border, but rather was snapped in Syria in 2012 and was captioned by the photographer: “Four young Syrian boys with toy guns are posing in front of my camera during my visit to Azaz, Syria. Most people I met were giving the peace sign. This little city was taken by the Free Syrian Army in the summer of 2012 during the Battle of Azaz.”

Using fake or misleading images to stoke fear, disgust, or hatred of another group of people is a common way photos and videos are misused online, and they deserve fact-checking as well.

Facebook also says it’s now taking advantage of new machine learning technology to help it find duplicates of already debunked stories. And it will work with fact-checking partners to use Schema.org‘s Claim Review, an open-source framework that will allow fact-checkers to share ratings with Facebook so the company can act more quickly, especially in times of crisis.

The company is also expanding its efforts in downranking fake news by using machine learning to demote foreign Pages that are spreading financially-motivated hoaxes to people in other countries.

In the weeks ahead, an elections research commission working in partnership with Facebook to measure the volume and effect of misinformation on the social network will launch its website and its first request for proposals.

The company had already announced its plans to further investigate the role social media plans in elections and in democracy. This commission will receive access to privacy-protected data sets with a sample of links that people engaged with on Facebook, which will allow it to understand what sort of content is being shared, says Facebook. The company claim the research will “help keep us accountable and track our progress.”