Facebook launches ‘Drives,’ a US-only feature for collecting food, clothing and other necessities for people in need

Facebook today is introducing a new feature that will allow users in the U.S. to collect food, clothing and other necessities for people in need. The feature, called “Drives,” is being made available through Facebook’s existing Community Help hub, which is the place where Facebook centralizes requests and offers for help within a local community.

The Community Help hub was first launched in 2017 as a way for Facebook users to centralize their resources in the wake of a crisis, like a man-made, accidental or natural disaster, ranging from weather events to terrorist attacks, and more. In 2020, however, the feature has been put to broader use as a part of Facebook’s COVID-19 efforts, which even saw a version of Community Help feature scaled globally to help those impacted by the coronavirus outbreak.

Now, with the economic crisis created by the coronavirus pandemic in the U.S., millions are out of work and 12 million may lose their unemployment benefits in December when CARES Act provisions lapse. Food insecurity and an inability to pay bills, including rent and mortgage payments, as well as manage other household expenses, are impacting millions as well.

With Drives, Facebook will allow users to create and share their own efforts in collecting items for those in need, like a Canned Food Drive that’s looking to gather items for local shelters, a Clothing Drive, or any other event where someone is working to collect items to help others. 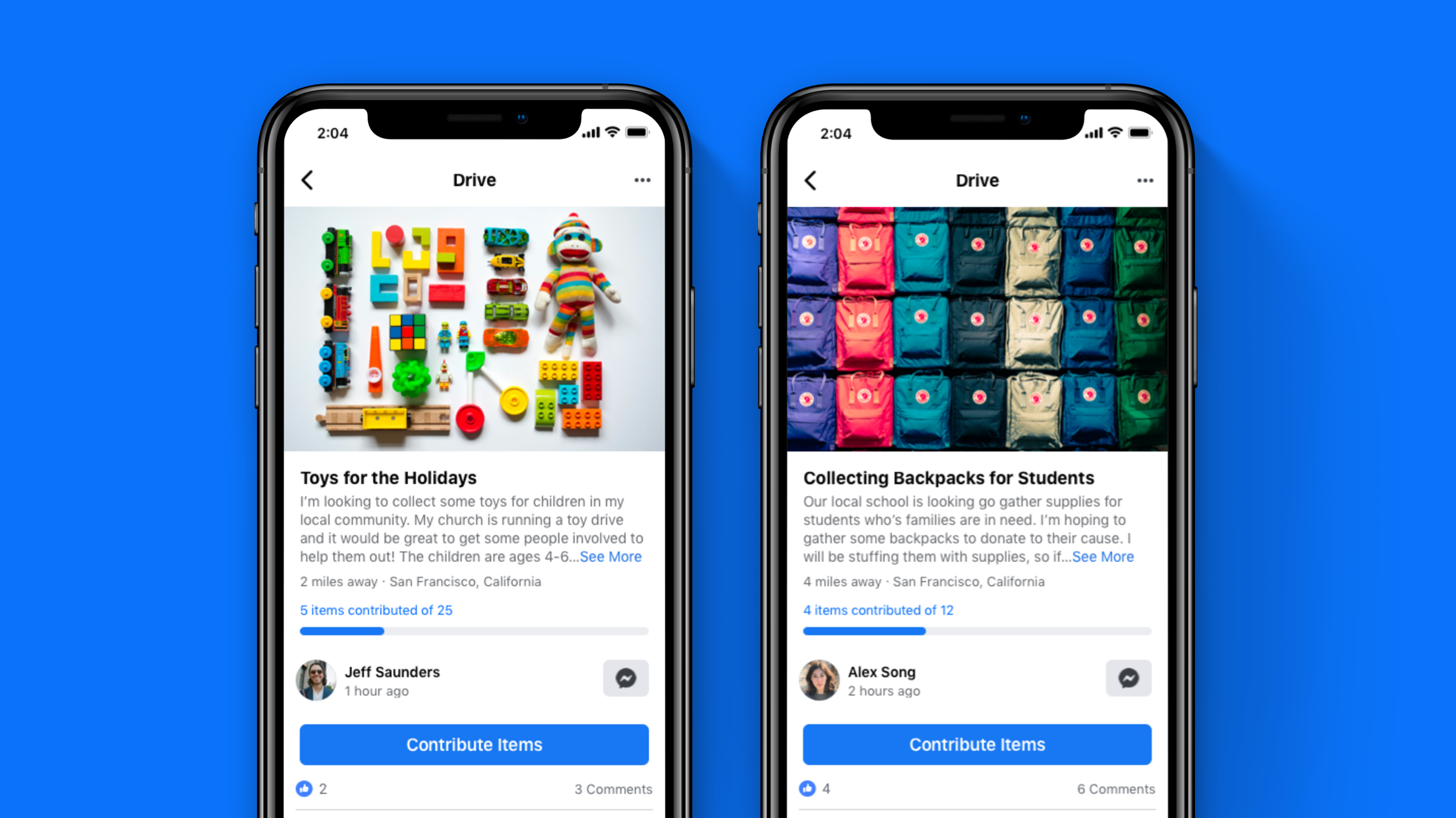 To create a Drive, type “Community Help” into Facebook Search to find the shortcut that takes you to the Community Help hub. From there, click the “Request or Offer Help” button, and on the bottom sheet that appears, click “Create Drive.” You can then fill out the form, setting a goal for the number of items you want to collect. When you post the Drive, others will be able to see what’s still needed with this goal tracker. Once created, the Drive will appear in your News Feed and Timeline like a regular post, in addition to appearing in Community Help.

The feature is rolling out starting today, but Facebook’s blog post originally said the feature may not be widely available to all for “weeks.” That would be unfortunate, given that many people likely want to run holiday-related Drives within the hub to help get food for holiday meals or toys for families in need, for example. (After publication of our article, Facebook updated the blog post to say “coming days” and emailed TechCrunch to say it will expedite the feature to ensure it arrives in time for the holidays.)

Facebook notes that all posts in Community Help, including Drives, are reviewed to ensure they don’t violate Facebook’s Community Standards or its Community Help Product Policies. These policies prohibit insensitive and promotional content, spam, inauthentic posts and posts from users under 18, among other things. If posts are found to be in violation, they’re taken down, the company says.

Drives is one of several efforts around holiday giving that Facebook announced today. The company also says it will match up to $7 million in eligible donations to U.S. nonprofits on Giving Tuesday (December 1), and is running its own fundraiser, “Peace Through Music: A Global Event For Social Justice” exclusively on Facebook Live. The event, on December 1 at 12 PM ET, will feature Aloe Blacc, Billie Eilish, Becky G, Carlos Santana & Cindy Blackman Santana, Killer Mike, Ringo Starr, Skip Marley, and others. The event will support the Playing for Change Foundation, the United Nations Population Fund, Sankofa, Silkroad and The Rock & Roll Hall of Fame Foundation.