Gather a mob and Facebook will now let you make political demands. Tomorrow Facebook will encounter a slew of fresh complexities with the launch of Community Actions, its News Feed petition feature. Community Actions could unite neighbors to request change from their local and national elected officials and government agencies. But it could also provide vocal interest groups a bully pulpit from which to pressure politicians and bureaucrats with their fringe agendas.

Community Actions embodies the central challenge facing Facebook. Every tool it designs for positive expression and connectivity can be subverted for polarization and misinformation. Facebook’s membership has swelled into such a ripe target for exploitation that it draws out the worst of humanity. You can imagine misuses like “Crack down on [minority group]” that are offensive or even dangerous but some see as legitimate. The question is whether Facebook puts in the forethought and aftercare to safeguard its new tools with proper policy and moderation. Otherwise each new feature is another liability. 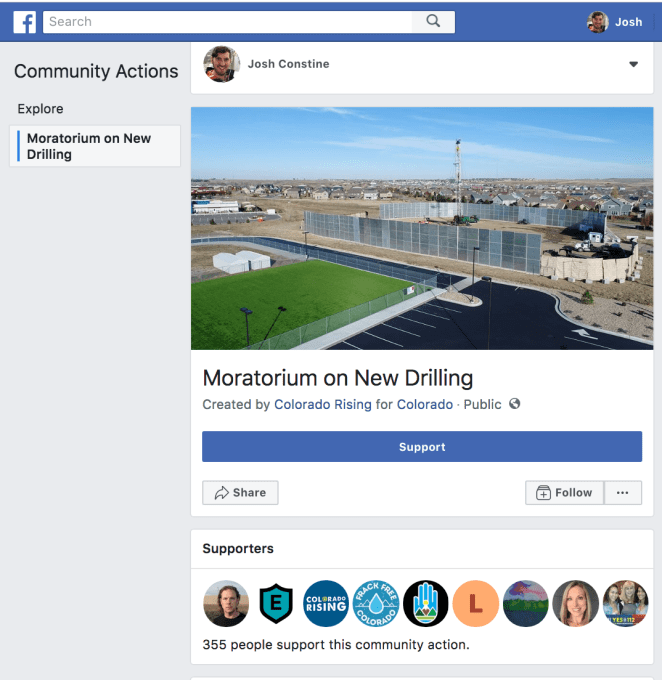 Community Actions start to roll out to the US tomorrow after several weeks of testing in a couple of markets. Users can add a title, description, and image to their Community Action, and tag relevant government agencies and officials who’ll be notified. The goal is to make the Community Action go viral and get people to hit the “Support” button. Community Actions have their own discussion feed where people can leave comments, create fundraisers, and organize Facebook Events or Call Your Rep campaigns. Facebook displays the numbers of supporters behind a Community Action, but you’ll only be able to see the names of those you’re friends with or that are Pages or public figures.

Facebook is purposefully trying to focus Community Actions to be more narrowly concentrated on spurring government action than just any random cause. That means it won’t immediately replace Change.org petitions that can range from the civilian to the absurd. But one-click Support straight from the News Feed could massively reduce the friction to signing up, and thereby attract organizations and individuals seeking to maximize the size of their mob. 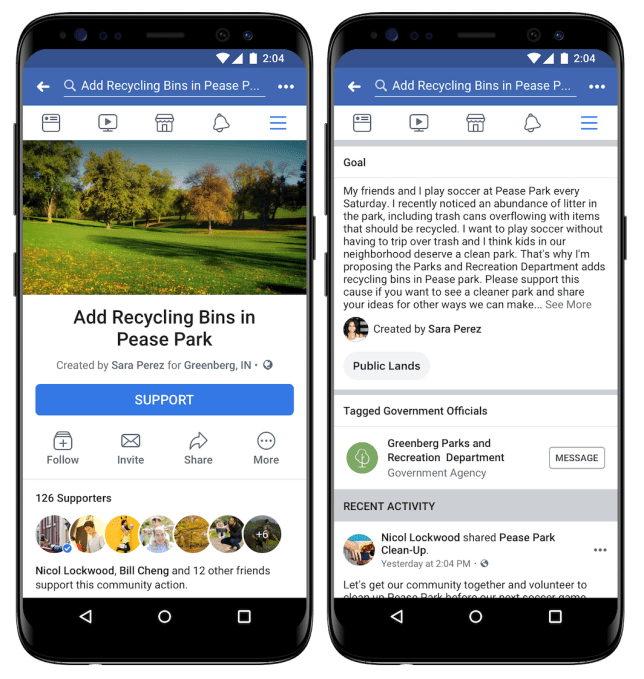 You can check out some examples here of Community Actions here like a non-profit Colorado Rising calling for the governor to put a moratorium on oil and gas drilling, citizens asking the a Florida’s mayor and state officials to build a performing arts center, and a Philadelphia neighborhood association requesting that the city put in crosswalks by the library. I fully expect one of the first big Community Actions will be the social network’s users asking Senators to shut down Facebook or depose Mark Zuckerberg.

The launch follows other civic-minded Facebook features like its Town Hall and Candidate Info for assessing politicians, Community Help for finding assistance after a disaster, and local news digest Today In. A Facebook spokesperson who gave us the first look at Community Actions provided this statement:

“Building informed and civically engaged communities is at the core of Facebook’s mission. Every day, people come together on Facebook to advocate for causes they care about, including by contacting their elected officials, launching a fundraiser, or starting a group. Through these and other tools, we have seen people marshal support for and get results on issues that matter to them. Community Action is another way for people to advocate for changes in their communities and partner with elected officials and government agencies on solutions.” 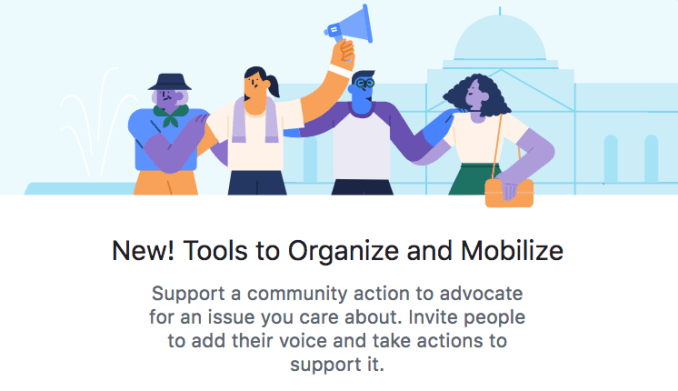 The question will be where Facebook’s moderators draw the line on what’s appropriate as a Community Action, and the ensuing calls of bias that line will trigger. Facebook is employing a combination of user flagging, proactive algorithmic detection, and human enforcers to manage the feature. But what the left might call harassment, the right might call free expression. If Facebook allows controversial Community Actions to persist, it could be viewed as complicit with their campaigns, but could be criticized for censorship if it takes one down. Like fake news and trending topics, the feature could become the social network’s latest can of worms.

Facebook is trying to prioritize local Actions where community members have a real stake. It lets user display “constituent” badges so their elected officials know they aren’t just a distant rabble-rouser. It’s why Facebook will not allow President Donald Trump or Vice President Mike Pence to be tagged in Community Actions. But you’re free to tag all your state representatives demanding nude parks, apparently. 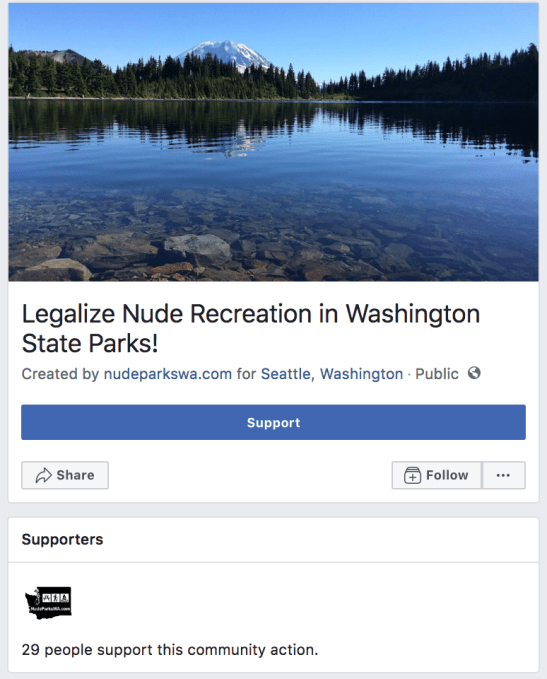 Another issue is how people can stand up against a Community Action. Only those who Support one may join in its discussion feed. That might lead trolls to falsely pledge their backing just to stir up trouble in the comments. Otherwise, Facebook tells me users will have to share a Community Action to their own feed with a message of disapproval, or launch their own in protest. My concern is that an agitated but niche group could drive a sense of false equivocacy by using Facebook Groups or message threads to make it look like there’s as much or more support for a vulgar cause or against of a just one. A politician could be backed into a corner and forced to acknowledge radicals or bad-faith actors lest they look negligent

While Facebook’s spokesperson says initial tests didn’t surface many troubles, the company is trying to balance safety with efficiency and it will consider how to evolve the feature in response to emergent behaviors. The trouble is that open access draws out the trolls and grifters seeking to fragment society. Facebook will have to assume the thorny responsibility of shepherding the product towards righteousness and defining what that even means. If it succeeds, there’s an amazing opportunity here for citizens to band together to exert consensus upon government. A chorus of voices carries much further than a single cry.