Collab, Facebook’s experimental app for making collaborative music videos, is today launching out of private beta testing with a public release on the App Store. The app is one of now many projects from Facebook’s internal R&D group, NPE Team, which tests new ideas that could ultimately influence Facebook’s next steps in social media. Collab itself first emerged in late May, as the pandemic forced users to stay home and find new ways to entertain themselves online.

For musicians, the pandemic has meant the lack of live concerts, which had been a key way they connected with fans. They, too, turned to online platforms to experiment with live-streamed concerts and jam sessions in order to keep those connections flowing. At the same time, short-form videos took off, led by TikTok, which also includes collaborative features like duets and stitches, which allow users who don’t know each other to incorporate each other’s content into their own.

Collab stepped into this space with its combination of short-form video and the collaborative aspects of modern social media, but with a direct focus on music.

In the app, a “collab” is a selection of three 15-second independent videos, stacked on top of each other, that play in sync. For example, a collab could consist of a guitarist, drummer and a singer, each playing alongside each other in their respective videos. Users can either create a collab by playing along with someone else’s video or, if you lack musical experience, you can just swipe on one of the three rows to choose a different video to slot into the mix from those available.

When you first open Collab, you’re presented with an endless scrolling feed of these “collabs,” which you can swipe through to find one you want to join or mix. As you discover musicians you like to play along with, you can favorite them in the app to be notified when they post new clips. This also personalizes the main feed.

Indie pop artist morgxn is one of the musicians who joined Collab during the beta earlier this year.

“This year, I was dropped by my record label the same day that Billie Eilish [posted] about me — about my song ‘Home’ being inspiring to her song ‘Bad Guy.’ So I had this catastrophic thing happening as we were entering quarantine, while the internet was giving me this boost of confidence.”

Morgxn decided to release his song “Wonder” on Collab, asking fans to come make a video with him by playing along. That song now has 43 million streams. There’s even a Spanish-language version, thanks to Collab.

“If anything came from this year where everything kind of fell apart, I also was really inspired to find new ways to do everything,” morgxn says. “If you leap, you might find something incredibly exciting, new and fresh. That’s how I ended up on Collab, and I’m excited.”

During the beta, Facebook made improvements to the app’s audio-syncing capabilities and other technical aspects.

The app itself will handle the complexities of audio and video syncing by offering in-app tools that can nudge your clip back into alignment when you’re off, so the resulting “collab” will be perfectly synced. Facebook also tested Collab with dozens of headsets and hardware configurations to optimize Collab for a variety of different setups. Users can now even use external audio interfaces to bring music from electronic instruments, like keyboard, guitars and drum kits into their recordings.

The app doesn’t offer a direct integration to Facebook, but the company notes that musicians are often using their bio to post links to their various social media presences, which may include their Facebook or Instagram profiles or pages. However, the videos you create in Collab can be exported to other places through the iOS share, meaning you can publish to your Instagram Story or even to rival TikTok. The export will be watermarked to allow for attribution as the video is more widely distributed, too.

The mechanics in Collab could allow for different types of mashed up videos in the future — like videos that include dance or humor, for instance, which have made an appearance during the beta. But for the time being, Facebook is remaining focused on music, says Collab Product lead, Brittany Mennuti. 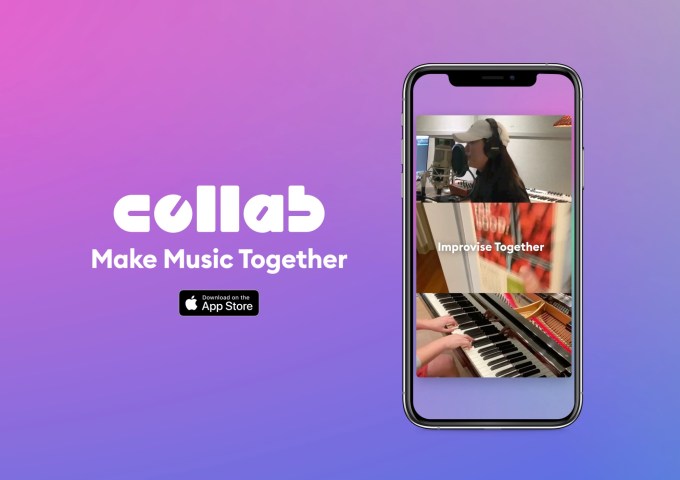 Mennuti, who had studied both Fine Arts and Business while in college, leads a small team inside Facebook with other creatives, including artists and musicians.

“I knew that I had to get really embedded in the community of musicians and music enthusiasts to build this product — and that’s exactly what we did. We created a Facebook group for our beta testers, and we communicate with them in that group daily, she says. In the group, musicians post questions, suggestions and share their music. “Aside from helping us figure out their needs, the most beautiful thing about this group is that they’ve actually connected with one another — there’s like a real community blossoming within the beta of people who might not have ever made music together.”

As it goes public, Facebook’s goal for Collab is to carve out a niche in the short-form video space that offers something more than a TikTok clone, like Instagram’s Reels or Snap’s Spotlight. However, to what extent Collab would live on independently, if it succeeded, rather than being merged into one of Facebook’s larger products remains to be seen.

Collab is live in the App Store in the U.S.