Facebook today is rolling out an update to its Access Your Information tool with the goal of making the tool easier to both use and navigate, as well as better explain how and why that data is used. The new version of the tool has been visually redesigned, and now further breaks down the viewable information across eight categories instead of just two.

The tool first launched in 2018 in the wake of the Cambridge Analytica scandal, when the personal data of up to 87 million Facebook users had been hijacked. Following that event, Facebook made a number of changes to how its platform apps worked and rolled out new features to make it easier for users to find and utilize Facebook’s privacy settings.

One of the additions was this Access Your Information tool, which offers users a secure way to manage their Facebook posts, reactions, comments and other things they’ve searched for. The idea is that you could use the tool to pull up your information, then “delete anything from your timeline or profile that you no longer want on Facebook.”

Before, this tool offered just two broad categories of data: Your Information and Information About You. The updated version, on the other hand, has broken this out to eight categories:

Within each of these eight categories, the information is then further broken down into subcategories. This makes it easier to more narrowly drill down to just the sort of data you want to view and, possibly, remove. 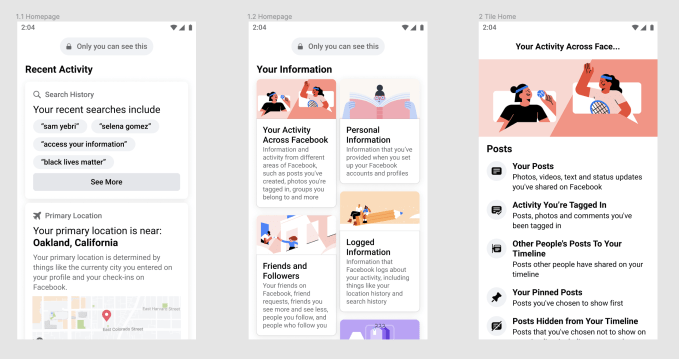 In addition, the tool is introducing Search functionality with the update. You can find data categories by searching them — like by typing in “location” to pull up information about your location history.

The tool will also now better explain how this data Facebook has can be used to personalize your experience on its platform. For example, you might see your primary location is one of the signals that was used to target you with an ad for a food delivery app. (Facebook already explains this in its Why Am I Seeing This tool for ads, but now it’s in this tool, too.)

Facebook says the changes were developed based on how people had been using the tool — especially in terms of what categories of data they were clicking on.

That said, the timing of the tool’s revamp is notable. There’s a large effort at Apple underway to better highlight to App Store users which apps collect personal data, which is then used to track them. Apple is now requiring apps to add App Store privacy labels and will soon require apps to get user consent on tracking.

Facebook, in response to this push, launched a website and ran full-page ads in newspapers to gain support for its personalized advertising business, noting the harms it says will come to small businesses as a result of Apple’s changes.

This revamped tool will help make Facebook’s case to users, as well, by explaining why the data and the ads could be useful. (After all, isn’t it better to see a food delivery ad for a company that actually serves your local area? Facebook would want you to think so.)

Then there is the not-so-small-matter of people who may be trying to rapidly delete their incriminating Facebook history — like photos and videos of themselves inside the Capitol during last week’s riot, perhaps. Now that the FBI is filing federal charges and dozens more are being charged in Superior Court, people may be rethinking their decision to share their participation in the event so publicly. The tool could help there, too.

Facebook, when asked, said the enhancements are just a usability update, however.

The new tool is available today on iOS and Android, with an expansion to desktop to come.