Facebook today is formally rolling out a new suite of tools for its 40 million active businesses on Messenger, including appointment booking, lead generation and others announced earlier this year at its F8 developer conference. As a part of these changes, Facebook will also begin to phase out the Discover tab in Messenger — a feature that became home to both games and businesses following last fall’s redesign.

Today, Facebook says the Discover tab will be pulled from the Messenger app over the next several months. Instead, it will invest in making sure Facebook users are directed to interact with businesses via Messenger in other ways.

“We want to make it more seamless for people to reach out to businesses on Messenger in places where they’re already looking to connect,” explains Facebook, of its decision to kill off the Discover feature. “We will put more investment into tools to connect people and businesses — including updates to m.me links, web plugins, various entry points across our family of apps, as well as ad products — that lead to Messenger,” the company says.

In terms of its new business tools, the lead-generation product will launch as a Messenger template within Facebook Ads Manager this week. The template lets businesses create automated experiences to help qualify their leads in Messenger, then continue conversations in the app or integrate with existing CRM tools to track the leads further.

The feature has been in beta following F8, but will now be publicly available.

Appointment booking was announced at F8, too, but is only now launching into beta with select developers and businesses. This feature allows businesses to accept appointment requests and make bookings in real-time through Messenger. It also integrates with existing calendar-booking software, and can help Messenger conversations be turned into in-store traffic, as well as online and phone appointments, the company says.

The feature will be launched globally to all developers later in the year.

Another update mentioned today involves plans to launch improved event reporting in Messenger later this year, which will allow businesses to report and track their Messenger conversations.

Plus, Facebook says it’s updating the Standard Messaging window for businesses to 24 hours (which is how long they have to respond to inquiries from customers). This brings it in line with WhatsApp’s window. 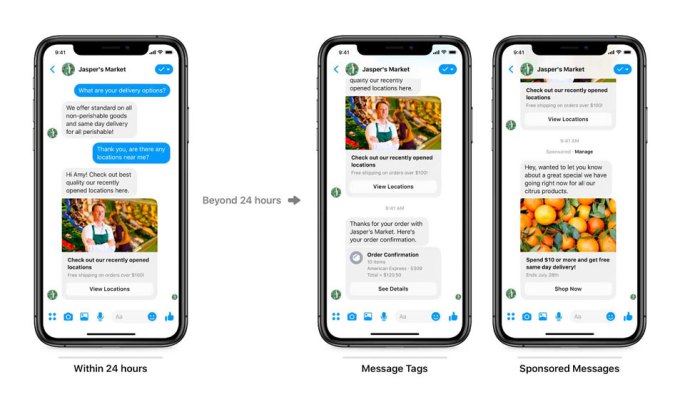 After 24 hours, businesses can still use sponsored messages to re-engage customers and message tags (e.g. updates on purchases, event reminders, changes to their account, and now in closed beta, “human agent,” which will let agents respond to issues that need resolution after the standard messaging window closes).

It’s now going to be limited to “vetted news organizations.” This came about because some businesses were using the feature in violation of Facebook’s guidelines, the company admitted. The feature is designed to send regular news updates to subscribers. The timing of this change is somewhat interesting, as Facebook is preparing to relaunch efforts to feature top news stories on its social network, this time vetted by journalists and featuring content Facebook pays for. There’s room for some interoperability here between the news product and subscriptions/updates, but it’s not clear if or how that will come to pass.

Of course, the biggest Messenger consumer news from F8 — a desktop app for Mac and PC — hasn’t yet come to pass, but is expected sometime this year.