Starting today, some U.S. Facebook users will see a new pop-up on the app asking them to complete a survey about COVID-19. The survey, from Carnegie Mellon University’s Delphi epidemiological research center, is one of many new symptom mapping projects that seek to anticipate where the next wave of the virus will hit as COVID-19 sweeps through populations the world over.

As if often the case in research, the challenge for these symptom mapping efforts is attracting a large enough sample of respondents to paint a statistically meaningful picture. Carnegie Mellon’s research effort will get a big leg up from Facebook, which may promote similar surveys in different parts of the world if this one goes well. 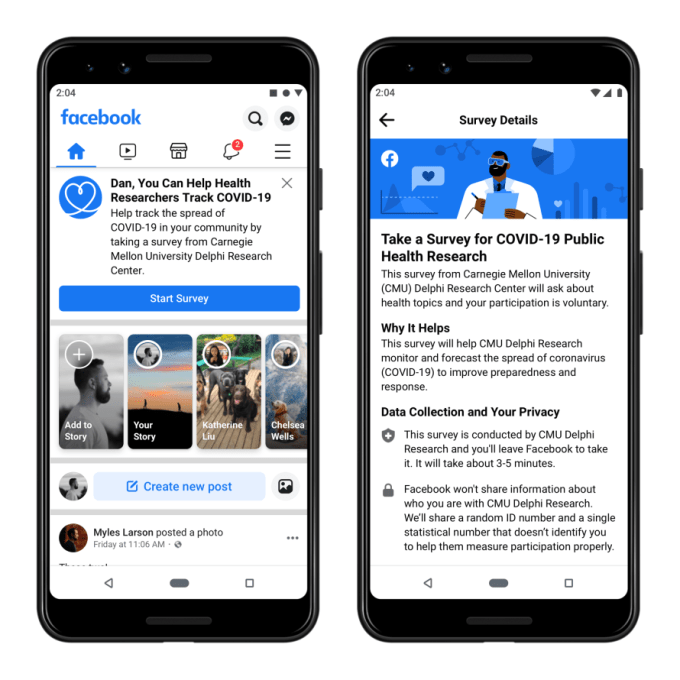 While some other projects require users to download an app or find their way to an obscure web portal, Facebook’s promotion of the Carnegie Mellon survey means it can instantly reach a portion of users from the largest pool of online users any social network has ever collected. Facebook declined to provide details on how many users will be seeing the new prompt, but even a sub-section of Facebook’s U.S. users over the age of 18 would likely be massive from a data collection standpoint.

Many U.S. symptom tracking projects launched as the virus exploded over the last month, including a new app from Pinterest’s co-founder and others from research institutes like Harvard and New York’s Weill Cornell Medicine. The idea is that tracking self-reported symptoms could provide geographical insights that bolster the limited testing data available now.

While users might be understandably wary of a research effort promoted by Facebook, given its recently fairly notorious record on user privacy, the company’s knowledge of who you are won’t be linked to the university’s data, which will be examined in aggregate. According to Facebook’s announcement, the survey data collected will aid public health planning around resource allocation and eventually “when, where and how to reopen parts of society.”

The company announced the effort along with an expanded set of disease prevention maps, which the company will make available to researchers as part of its “Data for Good” initiative.

Source: Tech Crunch Social
Facebook starts prompting US users to fill out a COVID-19 survey to help track the virus