Facebook has failed to clean up the brisk trade in fake product reviews taking place on its platform, an investigation by the consumer association Which? has found.

In June both Facebook and eBay were warned by the UK’s Competition and Markets Authority (CMA) they needed to do more to tackle the sale of fake product reviews. On eBay sellers were offering batches of five-star product reviews in exchange for cash, while Facebook’s platform was found hosting multiple groups were members solicited writers of fake reviews in exchange for free products or cash (or both).

But little appears to have been done to prevent Facebook groups trading in fake reviews — with Which? finding dozens of Facebook groups that it said “continue to encourage incentivised reviews on a huge scale”. Which? says it found more than 55,000 new posts across just nine Facebook groups trading fake reviews in July, which it said were generating hundreds “or even thousands” of posts per day.

It points out the true figure is likely to be higher because Facebook caps the number of posts it quantifies at 10,000 (and three of the ten groups had hit that ceiling).

Which? also found Facebook groups trading fake reviews that had sharply increased their membership over a 30-day period, adding that it was “disconcertingly easy to find dozens of suspicious-looking groups in minutes”. 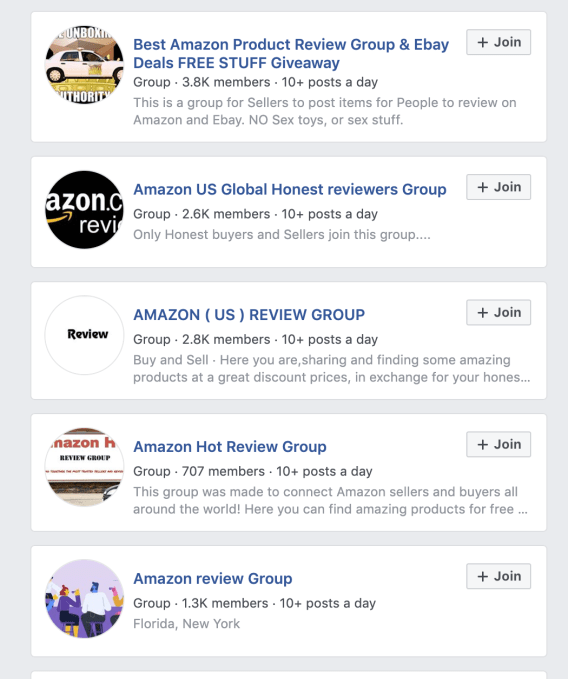 Which? says looked in detail at ten groups (it doesn’t name the groups), all of which contained the word ‘Amazon’ in their group name, finding that all of them had seen their membership rise over a 30-day period — with some seeing big spikes in members.

“One Facebook group tripled its membership over a 30-day period, while another (which was first started in April 2018) saw member numbers double to more than 5,000,” it writes. “One group had more than 10,000 members after 4,300 people joined it in a month — a 75% increase, despite the group existing since April 2017.”

Which? speculates that the surge in Facebook group members could be a direct result of eBay cracking down on fake reviews sellers on its own platform.

Across the ten groups it says there were more than 3,500 new posts promoting inventivised reviews in a single day. Which? also notes that Facebook’s algorithm regularly recommended similar groups to those that appeared to be trading in fake reviews — on the ‘suggested for you’ page.

It also says it found admins of groups it joined listing alternative groups to join in case the original is shut down.

Commenting in a statement, Natalie Hitchins, Which?’s head of products and services, said: ‘Our latest findings demonstrate that Facebook has systematically failed to take action while its platform continues to be plagued with fake review groups generating thousands of posts a day.

“It is deeply concerning that the company continues to leave customers exposed to poor-quality or unsafe products boosted by misleading and disingenuous reviews. Facebook must immediately take steps to not only address the groups that are reported to it, but also proactively identify and shut down other groups, and put measures in place to prevent more from appearing in the future.”

“The CMA must now consider enforcement action to ensure that more is being done to protect people from being misled online. Which? will be monitoring the situation closely and piling on the pressure to banish these fake review groups,” she added.

Responding to Which?‘s findings in a statement, CMA senior director George Lusty said: “It is unacceptable that Facebook groups promoting fake reviews seem to be reappearing. Facebook must take effective steps to deal with this problem by quickly removing the material and stop it from resurfacing.”

“This is just the start – we’ll be doing more to tackle fake and misleading online reviews,” he added. “Lots of us rely on reviews when shopping online to decide what to buy. It is important that people are able to trust they are genuine, rather than something someone has been paid to write.”

In a statement Facebook claimed it has removed 9 out of ten of the groups Which? reported to it and claimed to be “investigating the remaining group”.

“We don’t allow people to use Facebook to facilitate or encourage false reviews,” it added. “We continue to improve our tools to proactively prevent this kind of abuse, including investing in technology and increasing the size of our safety and security team to 30,000.”