Facebook’s internal R&D group, NPE Team, has today launched its latest experiment, Hotline, into public beta testing. The web-based application could be described as a mashup of Instagram Live and Clubhouse, as it allows creators to speak to an audience who can then ask questions through either text or audio. However, unlike Clubhouse, creators can opt to turn their cameras on for the event, instead of being audio-only.

Real estate investor Nick Huber is the first to publicly try out the product with a livestream today that began at 10 AM PT (1 PM ET). Huber represents the sort of creator Facebook wants to work with for Hotline, Facebook told us, which is someone who helps people expand their professional skills or their finances. In Huber’s case, he’s talking about investing in industrial real estate as a second income stream.

At Facebook, Hotline is being led by Eric Hazzard, who joined Facebook when it acquired his app tbh, a positivity-focused Q&A app that grew to 2.5 million daily active users in nine weeks and saw over 1 billion poll answers before exiting. With Hotline, Hazzard is once again developing a product in the Q&A space.

But this time, the new app is taking inspiration from an up-and-coming social network, Clubhouse. In fact, Hotline’s user interface will look familiar to anyone who’s already used Clubhouse, Twitter Spaces or any of the other audio-only social networks, when it’s viewed on mobile. At the top on mobile (or to the left side on desktop), there’s a speaker section where the event host is featured in a round profile icon or live video stream. Below (or to the side on desktop) are the event’s listeners.

But there are also several differences between Hotline and existing apps, like Clubhouse.

For starters, the app today has users sign in with Twitter then verify their identity via SMS.

The listeners’ section, for example, is divided up between those who are just watching the event, as represented by their profile icons, and those who are asking questions. At the top of this section, you’re presented with the lists of questions that users have asked, which others can upvote or downvote accordingly. The creator can then look to this section to find out which questions to answer next and can pull listeners onto the stage area with them for a conversation.

At present, users can type in their questions, then join the host “on stage,” when it’s their turn. Currently, guests are represented by their profile icon and are audio only when on stage. But in the settings, there’s an option for the listener to toggle on video that’s not yet functional for today’s test.

As the questions are asked, users can react with emoji including clapping hands, fire, heart, laughter, surprise and thumbs up. 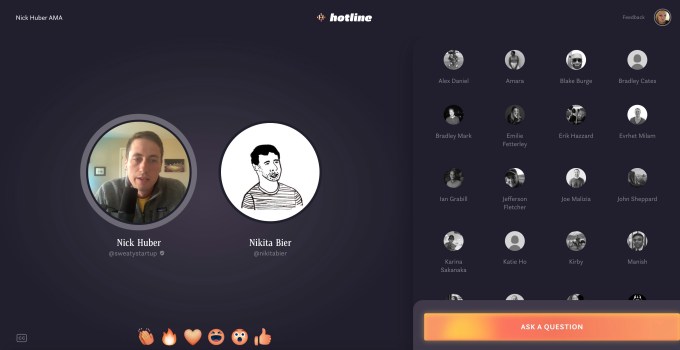 Hosts have full control over the experience, and can remove inappropriate questions from the queue or remove people from their Hotline session. For the initial tests, Facebook employees will moderate events and remove anyone that violates Facebook’s Community Standards, Terms of Service, Data Policy or the NPE Team’s Supplemental Terms.

Another notable difference between Hotline and Clubhouse is that Hotline events are recorded.

Today, Clubhouse favors more casual chats where people understand there’s no transcript or recording taking place (unless indicated by the host in the room’s title). This, Clubhouse believes, allows participants to speak more freely and with less fear. But Hotline automatically produces recordings. After the event, the host will receive two recordings of the session — one as an mp3 and another as an mp4. The creator can then upload these to other networks, like YouTube or Facebook, edit them into short-form content for apps like TikTok or turn the audio recording into a podcast, or anything else.

At launch, anyone can join a Hotline for free and there’s no limit on audience size, though this could change as the experiment progresses.

Despite the similarities with Clubhouse, Hotline has a different vibe because of its use of video, text-based questions, upvoting and because it’s recorded. This makes it feel less like a casual hangout and more like a professional event where an expert is leading a session and inviting an audience to ask questions.

Hotline is now one of several apps that Facebook’s NPE team has launched in the creator space to experiment with different ideas around audio and video. The group is continuing to test a creator app called Super, similar to Cameo, which is web-based and entirely video. It also previously tested an audio-only calling app, CatchUp, which shut down last year, as well as another Q&A product known as Venue, which is more of a Twitter-like companion for live events. More recently, it has launched TikTok-esque video apps Collab and BARS, which focused on collaborative music and raps, respectively.

Over time, the goal of NPE projects isn’t necessarily to stand them up on their own as individual apps — though that could happen, if they gained enough traction. More broadly, the learnings from the tests and experiments can help inform future Facebook product development, as it builds out new features for existing products, like Messenger Rooms or Facebook Live, among other things.

Facebook didn’t make an official announcement about Hotline’s launch, but offered a statement about today’s test.

“With Hotline, we’re hoping to understand how interactive, live multimedia Q&As can help people learn from experts in areas like professional skills, just as it helps those experts build their businesses,” a spokesperson said. “New Product Experimentation has been testing multimedia products like CatchUp, Venue, Collab, and BARS, and we’re encouraged to see the formats continue to help people connect and build community,” they added.

Hotline isn’t Facebook’s only attempt to challenge Clubhouse. The company is also in the process of developing a Clubhouse rival within the Messenger Rooms product experience, Facebook recently confirmed.