For the first time in more than half a decade, Facebook wants to inform you that it owns Instagram, the hyper-popular rival social networking app it acquired for a $1BN steal back in 2012.

Ditto messaging platform WhatsApp — which Mark Zuckerberg splurged $19BN on a couple of years later to keep feeding eyeballs into his growth engine.

The cheap perfume style rebranding was first reported by The Information which cites three people familiar with the matter who told it employees for the two apps were recently notified internally of the plan to rebrand.

“The move to add Facebook’s name to the apps has been met with surprise and confusion internally, reflecting the autonomy that the units have operated under,” it said. Although it also reported that CEO Mark Zuckerberg has also been frustrated that Facebook doesn’t get more credit for the growth of Instagram and WhatsApp.

So it sounds like Facebook may be hoping for a little reverse osmosis brand-washing — aka leveraging the popularity of its cleaner social apps to detoxify the scandal-hit mothership.

In a statement to The Information confirming the rebranding it explained it thus: “We want to be clearer about the products and services that are part of Facebook.”

Elizabeth Warren wants to break up Google, Amazon and Facebook

We can only surmise the legal advice Facebook must be receiving vis-a-vis what it should do to try to close down break up arguments that could deprive it of its pair of golden growth geese.

Arguments such as the fact most Instagram (and WhatsApp) users don’t even know they’re using a Facebook-owned app. Hence, as things stand, it would be pretty difficult for Facebook’s lawyers to successfully argue Instagram and WhatsApp users would be harmed if the apps were cut free by a break-up order.

But now — with the clumsy ‘from Facebook’ construction — Facebook can at least try to make a case that users are in a knowing relationship with Facebook in which they willingly, even if not lovingly, place their eyeballs in Zuckerberg’s bucket.

Note, for example, the use of the comparative adjective “clearer” in Facebook’s statement to explain its intent for the rebranding — rather than a simple statement: ‘we want to be clear’.

It’s definitely not saying it’s going to individually broadcast its ownership of Instagram and WhatsApp to each and every user on those networks. More like it’s going to try to creep the Facebook brand in. Which is far more in corporate character.

At the time of writing a five day old update of of Instagram’s iOS app already features the new construction — although it looks far more dark pattern than splashy rebrand, with just the faintest whisker of grey text at the base of the screen to disclose that you’re about to be sucked into the Facebook empire (vs a giant big blue ‘Create new account’ button winking to be tapped up top… )

Here’s the landing screen — with the new branding. Blink and you’ll miss it… 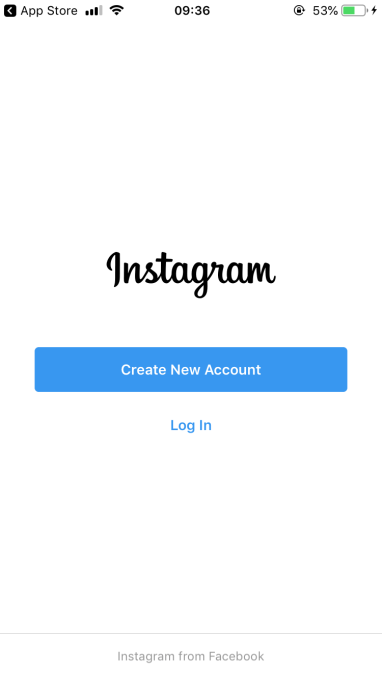 So not full disclosure then. More like just an easily overlooked dab of the legal stuff — to try to manage antitrust risk vs the risk of Facebook brand toxicity poisoning the (cleaner) wells of Instagram and WhatsApp.

There are signs the company is experimenting in some extremely dilute cross-brand-washing too.

The iOS app description for Instagram includes the new branding — tagged to an ad style slogan that gushes: “Bringing you closer to the people and things you love.”  But, frankly, who reads app descriptions? 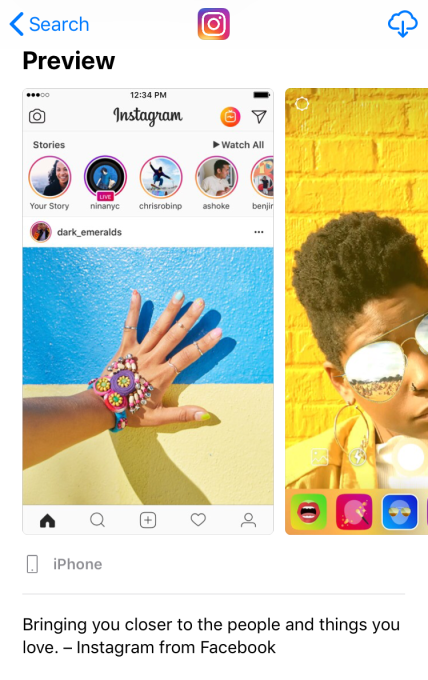 Up until pretty recently, both Instagram and WhatsApp had a degree of independence from their rapacious corporate parent — granted brand and operational independence under the original acquisition terms and leadership of their original founders.

Not any more, though. Instagram’s founders cleared out last year. While WhatsApp’s jumped ship between 2017 and 2018.

Zuckerberg lieutenants and/or long time Facebookers are now running both app businesses. The takeover is complete.

Facebook is also busy working on entangling the backends of its three networks — under a claimed ‘pivot to privacy‘ which it announced earlier this year.

This also appears intended to try to put regulators off by making breaking up Facebook much harder than it would be if you could just split it along existing app lines. Theories of user harm potentially get more complicated if you can demonstrate cross-platform chatter.

The accompanying 3,000+ word screed from Zuckerberg introduced the singular notion of “the Facebook network”; aka one pool for users to splash in, three differently colored slides to funnel you in there.

“In a few years, I expect future versions of Messenger and WhatsApp to become the main ways people communicate on the Facebook network,” he wrote. “If this evolution is successful, interacting with your friends and family across the Facebook network will become a fundamentally more private experience.”

The ‘from Facebook’ rebranding thus looks like just a little light covering fire for the really grand dodge Facebook is hoping to pull off as the break-up bullet speeds down the pipe: Aka Entangling its core businesses at the infrastructure level.

From three networks to one massive Facebook-owned user data pool.