Facebook was never ephemeral, and now its Stories won’t have to be

Before Snapchat made social media about just today, Facebook made it about forever. The 2011 “Timeline” redesign of the profile and keyword search unlocked your past, encouraging you to curate colorful posts about your life’s top moments. That was actually an inspiration for Snapchat, as its CEO Evan Spiegel wrote in its IPO announcement that “We learned that creativity can be suppressed by the fear of permanence.”

Now Facebook is finding a middle ground by optionally unlocking the history of your Stories that otherwise disappear after 24 hours. Facebook will soon begin testing Stories Highlights, the company confirmed to TechCrunch. Similar to Instagram Stories Highlights, it will let you pick your favorite expired photos and videos, compile them into themed collections with titles and cover images and display them on your profile.

The change further differentiates Facebook Stories from the Snapchat Stories feature it copied. It’s smart for Facebook, because highly compelling content was disintegrating each day, dragging potential ad views to the grave with it. And for its 150 million daily users, it could make the time we spend obsessing over social media Stories a wiser investment. If you’re going to interrupt special moments to capture them with your phone, the best ones should still pay dividends of self-expression and community connection beyond a day later. 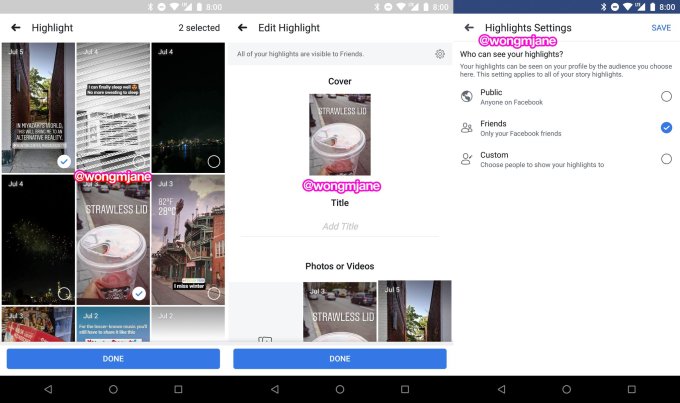 Facebook Stories Highlights was first spotted by frequent TechCrunch tipster Jane Manchun Wong, who specializes in generating screenshots of unreleased features out of the APK files of Android apps. TechCrunch inquired about the feature, and a Facebook spokesperson provided this statement: “People have told us they want a way to highlight and save the Stories that matter most to them. We’ll soon start testing highlights on Facebook – a way to choose Stories to stay on your profile, making it easier to express who you are through memories.”

These Highlights will appear on a horizontal scroll bar on your profile, and you’ll be able to see how many people viewed them just like with your Stories. They’ll default to being viewable by all your friends, but you can also restrict Highlights to certain people or make them public. The latter could be useful for public figures trying to build an audience, or anyone who thinks their identity is better revealed through their commentary on the world that Stories’ creative tools offer, opposed to some canned selfies and profile pics. Facebook paved the way for Highlights by launching the Stories Archive in May. This automatically backs up your Stories privately to your profile so you don’t have to keep the saved versions on your phone, wasting storage space. That Archive is the basis for being able to choose dead Stories to show off in your Highlights. Together, they’ll encourage users to shoot silly, off-the-cuff content without that “fear of permanence,” but instead with the opportunity. If you want to spend a half hour decorating a Facebook Story with stickers and drawing and captions and augmented reality, you know it won’t be in vain.

While many relentlessly criticize Facebook for stealing the Stories from Snapchat, its rapid iteration and innovation on the format means the two companies’ versions are sharply diverging. Snapchat still lacks a Highlights-esque feature despite launching its Archive-style Memories back in July 2016. Instead of enhancing the core Stories product that made the app a teen phenomenon, it’s concentrated on Maps, gaming, Search, professional Discover content, and a disastrously needless redesign.

Facebook’s family of apps seized on the stagnation of Snapchat Stories and its neglect of the international market. It copied whatever was working while developing new features like Instagram’s Superzoom and Focus portrait mode, the ability to reshare public feed posts as quote tweet-style Stories and the addition of licensed music soundtracks. While writing this article, I even discovered a new Facebook Stories option called Blur that lets you shroud a moving subject with a dream-like haze, as demonstrated with my dumb face here.

The relentless drive to add new options and smooth out performance has paid off. Now Instagram has 400 million daily Stories users, WhatsApp has 450 million and Facebook has 150 million, while Snapchat’s whole app has just 191 million. As Instagram CEO Kevin Systrom admitted about Snapchat, “They deserve all the credit.” Still, it hasn’t had a megahit since Stories and AR puppy masks. The company’s zeal for inventing new ways to socialize is admirable, though not always a sound business strategy.

At first, the Stories war was a race, to copy functionality and invade new markets. Instagram and now Facebook making ephemerality optional for their Stories signals a second phase of the war. The core idea of broadcasting content that disappears after a day has become commoditized and institutionalized. Now the winner will be declared not as who invented Stories, but who perfected them.

Source: Tech Crunch Social
Facebook was never ephemeral, and now its Stories won’t have to be