Following a particularly dark and vivid display of the threats to the 2020 U.S. election during Tuesday’s first presidential debate, Facebook has further clarified its new rules around election-related ads.

For example, this would include calling a method of voting inherently fraudulent or corrupt, or using isolated incidents of voter fraud to delegitimize the result of an election. You can find more info and specifics in our Help Center here https://t.co/BPnm1z7LW6 (2/3)

Facebook says it will also not allow ads that discourage users from voting, undermine vote-by-mail or other lawful voting methods, suggest voter fraud is widespread, threaten safe voting through false health claims and ads that suggest the vote is invalid because results might not be immediately known on election night.

Both Twitter and Facebook recently issued new guidelines on how they will handle claims of election victory prior to official results, though Facebook’s rules appear to only apply to those claims if they’re made in advertising. We’ve asked Facebook for clarification about how those claims will be handled outside of ads, on a candidate’s normal account.

While Twitter opted to no longer accept political advertising across the board, Facebook is instead tweaking its rules about what kinds of political ads it will allow and when. Facebook previously announced that it would no longer accept ads about elections, social issues or politics in the U.S. after October 27, though political ads that ran before that date will be allowed to continue.

Facebook is already grappling with a deluge of attacks on the integrity of November’s U.S. election originating with President Trump and his supporters. During Tuesday night’s debate, Trump again cast doubt about voting by mail (a system already trusted and in use nationwide in the form of absentee ballots) and declined to commit to accepting election results if he loses.

While the unique circumstances of the pandemic are leading to logistical challenges, voting through the mail is not new. A handful of states, including Colorado and Oregon, already conducted elections through the mail, and vote-by-mail is just a scaled-up version of the absentee voting systems already in place nationwide. 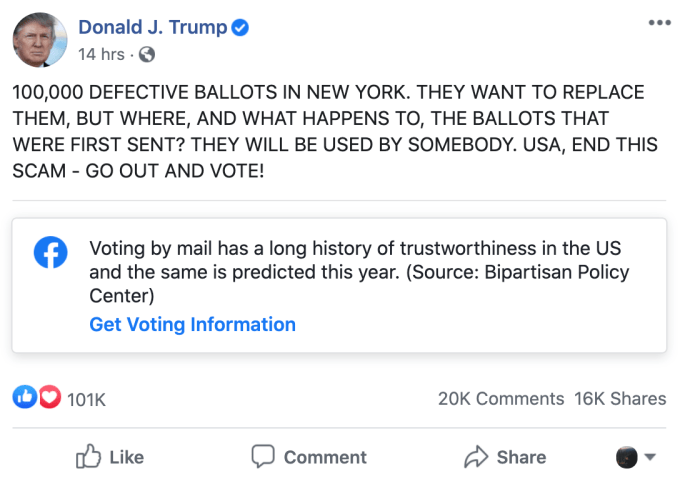 On Wednesday, President Trump sowed conspiratorial ideas about defective ballots that were sent out in New York state as a result of vendor error. The state will reissue the ballots, but Trump seized on the incident as evidence that vote-by-mail is a “scam” — a claim that evidence does not bear out.

Trump’s attacks on the U.S. election are an unprecedented challenge for social platforms, but also one for the nation as a whole, which has never in modern times seen the peaceful transfer of executive power threatened by a sitting president.

Vote-by-mail should be having its moment. Will it?