This July, Facebook announced a new division called NPE Team which would build experimental consumer-facing apps, allowing the company to try out new ideas and features to see how people would react. It soon thereafter tapped former Vine GM Jason Toff to join the team as a product manager. The first apps to emerge from the NPE Team have now quietly launched. One, Bump, is a chat app that aims to help people make new friends through conversations, not appearances. Another, Aux, is a social music listening app.

Aux seems a bit reminiscent of an older startup, Turntable.fm, that closed its doors in 2013. As in Turntable.fm, the idea with Aux is that of a virtual DJ’ing experience where people instead of algorithms are programming the music. This concept of crowdsourced DJ’ing also caught on in years past with radio stations that put their audiences in control of the playlist through their mobile app.

The NPE Team’s Aux app is a slightly different take on this general idea of people-powered playlists.

The app is aimed at school-aged kids and teens who join a party in the app every day at 9 PM. They then choose the songs they want to play and compete for the “AUX” to get theirs played first. At the end of the night, a winner is chosen based on how many “claps” are received.

As the app describes it, Aux is a “DJ for Your School” — a title that’s a bit confusing, as it brings to mind music being played over the school’s intercom system, as opposed to a social app for kids who attend school to use in the evenings.

Aux launched on August 8, 2019 in Canada, and has less than 500 downloads on iOS, according to data from Sensor Tower. It’s not available on Android. It briefly ranked No. 38 among all Music apps on the Canadian App Store on October 22, which may point to some sort of short campaign to juice the downloads.

The other new NPE Team app is Bump, which aims to help people “make new friends.”

Essentially an anonymous chat app, the idea here is that Bump can help people connect by giving them icebreakers to respond to using text. There are no images, videos or links in Bump — just chats.

Based on the App Store screenshots, the app seems to be intended for college students. The screenshots show questions about “the coolest place” on campus and where to find cheap food. A sample chat shown in the screenshots mentions things like classes and roommate troubles. 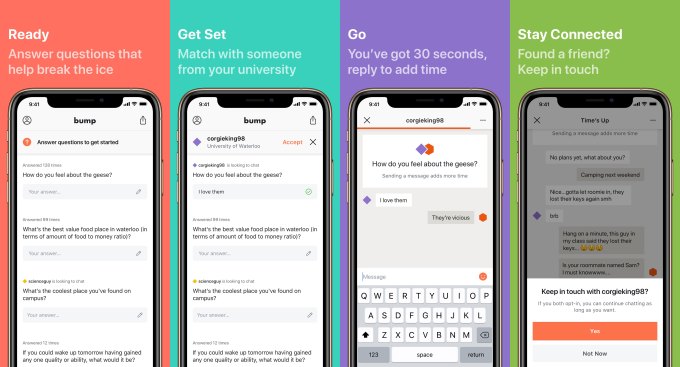 There could be a dating component to the app, as well, as it stresses that Bump helps people make a connection through “dialog versus appearances.” That levels the playing field a bit, compared with other social apps — and certainly dating apps — where the most attractive users with the best photos tend to receive the most attention.

Chats in Bump take place in real time, and you can only message in one chat at a time. There’s also a time limit of 30 seconds to respond to messages, which keeps the chat active. When the chat ends, the app will ask you if you want to keep in touch with the other person. Only if both people say yes will you be able to chat with them again.

Bump is available on both iOS and Android and is live in Canada and the Philippines. Bump once ranked as high as No. 252 in Social Networking on the Canadian App Store on September 1, 2019, according to Sensor Tower. However, it’s not ranking at all right now.

What’s interesting is that only one of these NPE Team apps, Bump, discloses in its App Store description that the NPE Team is from Facebook. The other, Aux, doesn’t mention this. However, both do point to an App privacy policy that’s hosted on Facebook.com for those who go digging.

That’s not too different from how Google’s in-house app incubator, Area 120, behaves. Some of its apps aren’t clear about their affiliation with Google, save for a link to Google’s privacy policy. It seems these companies want to see if the apps succeed or fail on their own merit, not because of their parent company’s brand name recognition.

Facebook hasn’t said much about its plans for the NPE Team beyond the fact that they will focus on new ways of building community and may be shut down quickly if they’re not useful.

Facebook has been asked for comment about the new apps and we’ll update if one is provided.