Want to run your own home shopping network? Facebook is now testing a Live video feature for merchants that lets them demo and describe their items for viewers. Customers can screenshot something they want to buy and use Messenger to send it to the seller, who can then request payment right through the chat app.

Facebook confirms the new shopping feature is currently in testing with a limited set of Pages in Thailand, which has been a testbed for shopping features. The option was first spotted by social media and reputation manager Jeff Higgins, and re-shared by Matt Navarra and Social Media Today. But now Facebook is confirming the test’s existence and providing additional details. 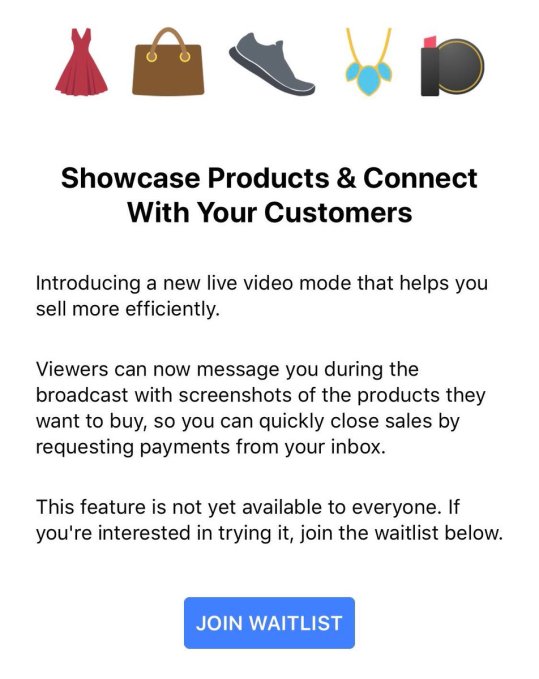 The company tells me it had heard feedback from the community in Thailand that Live video helped sellers demonstrate how items could be used or worn, and provided richer understanding than just using photos. Users also told Facebook that Live’s interactivity let customers instantly ask questions and get answers about product specifications and details. Facebook has looked to Thailand to test new commerce experiences like home rentals in Marketplace, as the country’s citizens were quick to prove how Facebook Groups could be used for peer-to-peer shopping. “Thailand is one of our most active Marketplace communities” says Mayank Yadav, Facebook product manager for Marketplace.

Now it’s running the Live shopping test, which allows Pages to notify fans that they’re broadcasting to “showcase products and connect with your customers.” Merchants can take reservations and request payments through Messenger. Facebook tells me it doesn’t currently have plans to add new partners or expand the feature. But some sellers without access are being invited to join a waitlist for the feature. It also says it’s working closely with its test partners to gather feedback and iterate on the live video shopping experience, which would seem to indicate it’s interested in opening the feature more widely if it performs well.

Facebook doesn’t take a cut of payments through Messenger, but the feature could still help earn the company money at a time when it’s seeking revenue streams beyond News Feed ads as it runs out of space there, Stories take over as the top media form and user growth plateaus. Hooking people on video viewing helps Facebook show lucrative video ads. The more that Facebook can train users to buy and sell things on its app, the better the conversion rates will be for businesses, and the more they’ll be willing to spend on ads. Facebook could also convince sellers who broadcast Live to buy its new Marketplace ad units to promote their wares. And Facebook is happy to snatch any use case from the rest of the internet, whether it’s long-form video viewing or job applications or shopping to boost time on site and subsequent ad views.

Increasingly, Facebook is setting its sights on Craigslist, Etsy and eBay. Those commerce platforms have failed to keep up with new technologies like video and lack the trust generated by Facebook’s real-name policy and social graph. A few years ago, selling something online meant typing up a generic description and maybe uploading a photo. Soon it could mean starring in your own infomercial.