Instagram is preparing to launch a feature called Nametags that lets you create a special image that people can scan with the Instagram Stories camera to follow you. TechCrunch broke the news of Nametags code in Instagram’s Android APK last month. But now thanks to reader Genady Okrain we have screenshots and more details of the Instagram Nametags feature. 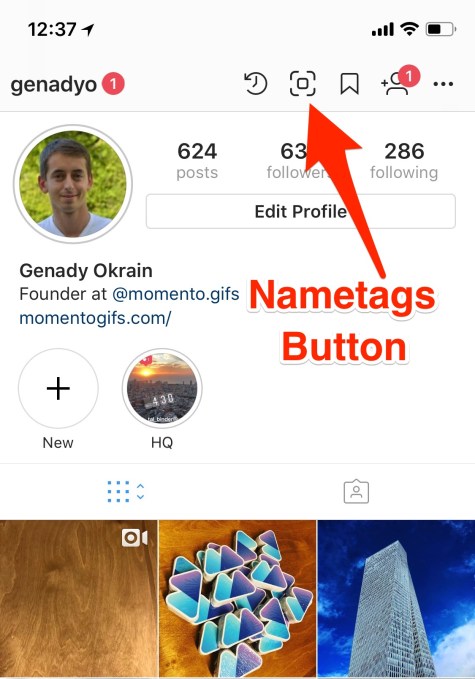 Nametags could make it easier for people to visually promote their Instagram account. It could make it simple to follow a friend you just met by having them open their Nametag and then you scanning it. Meanwhile, businesses and social media stars could post their Nametag across other social media handles, print it onto posters or handbills or even make merchandise out of it.

An Instagram spokesperson confirmed to TechCrunch that it is testing the Nametags feature. Instagram’s been spotted doing a flurry of feature development lately. TechCrunch has reported that code for an Instagram Video Calling feature was found in its Android APK. Meanwhile, it’s testing a Portrait mode feature called Focus.

Once users have access, they’ll be able to hit a QR scanner button on their profile to bring up the Nametag editor. They can then choose from a purple Instagram color gradient background, a pattern of one emoji they choose or a selfie they can jazz up with augmented reality face filters that then becomes an emoji pattern. The user’s Instagram username appears in the center. For now, users in the test group can’t share or scan Nametags. But the code we discovered explains that users can scan them to follow people.

Snapchat in January 2015 launched its own Snapcodes that work similarly, meaning Instagram took its time copying this feature. But with social media stars and businesses banished to Snapchat’s Discover channel, those accounts might be looking to prioritize promoting their Instagram accounts. If creators find it easier to build an audience on Instagram and get more engagement there, they could give the Facebook-owned app their first-run content. The eventual launch of Nametags could give them one more reason to use Snapchat copycat Instagram Stories instead of the original.

For more on upcoming Instagram features, check out our other stories on Focus and Video Calling