A growing number of U.S. consumers are getting scammed on social media, according to a new report by the Federal Trade Commission (FTC), which revealed that consumers lost $770 million to social media scams in 2021 — a figure that accounted for about one-fourth of all fraud losses for the year. That number has also increased 18 times from the $42 million in social media fraud reported in 2017, the FTC said, as new types of scams involving cryptocurrency and online shopping became more popular. This has also led to many younger consumers getting scammed, as now adults ages 18 to 39 reported fraud losses at a rate that’s 2.4x higher than adults 40 and over.

Scammers have clearly found that social media is one of the most profitable places to commit fraud. More than 95,000 fraud victims said they were first contacted on social media — more than double 2020’s number, and up 19x from 2017.

More than one in four individuals who reported losing money to fraud to the FTC last year said they first saw a post, message or ad on social media which had prompted the scam. Excluding reports that didn’t indicate a contact method, social media scams accounted for 26% of the losses attributed to fraud in 2021 ($770 million), followed by websites and apps at 19% ($554 million), then phone calls at 18% ($546 million). The median individual losses, however, were highest with phone fraud at $1,110 compared with $468 for social media fraud.

In the case of online romance scams, more than a third of users reported the first outreach they had from the scammer was on Facebook or Instagram. Specifically, Facebook accounted for 23% and Instagram 13% of romance scams. These scams would begin with a seemingly innocent friend request, followed by sweet talk, then a request for money, the report explained.

Meanwhile, more than half (54%) of the investment scams in 2021 began with social media platforms, where scammers would promote bogus investment opportunities or connect with people directly to encourage them to invest. Instagram was popular with scammers here, accounting for 36% of investment scams, followed by Facebook at 28%, then messaging apps WhatsApp and Telegram at 9% and 7%, respectively.

A large majority of the investment scams now involve cryptocurrency, the report also found. In 2021, cryptocurrency was the method of payment in 64% of social media investment scams reported to the FTC. Payment apps and services were the payment methods used in 13% of cases, followed by bank transfers or bank payments in 9%. 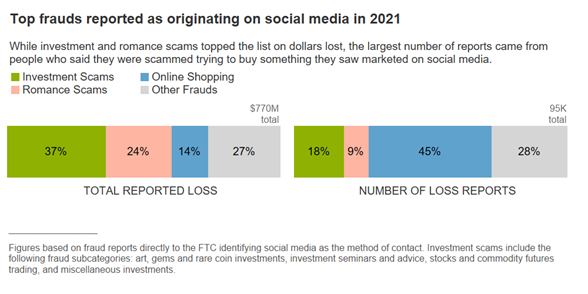 Although romance and investment scams continued to account for the largest losses by dollar amounts, even reaching record highs, the scams with the largest number of reports to the FTC involve consumers trying to purchase something they first saw on social media. In most cases, people were trying to make a purchase of something they saw marketed on Facebook or Instagram.

In 2021, 45% of reports sent to the FTC over money lost in social media scams were related to online shopping. Nearly 70% of those involved people who placed an order, typically after seeing an ad on social media, but then never received the merchandise. Some also noted the ads would direct them to “lookalike” websites, designed to fool them into thinking they were purchasing from a real online retailer. Facebook and Instagram served as the platforms of choice for nine out of 10 of these scams, the report noted.

The increase in online shopping scams isn’t just an issue for the consumers losing money — it’s detrimenatal to the overall e-commerce ecosystem and social media companies’ businesses. In recent years, Facebook and Instagram have invested heavily in making online shopping a core part of their services, promising to connect advertisers with targeted customers. The Meta-owned apps also now include their own “Shop” sections, where consumers can browse goods and check out directly — without having to exit to an external website. But if consumers become wary of the legitimacy of the online retailers featured on these platforms, they may hesitate to shop from social media in the future.

4 trends that will define e-commerce in 2022

For Meta, a change in consumer shopping behavior would matter more today than in years past, as the company’s larger ad business has been impacted by Apple’s privacy changes on iOS which let consumers opt out of tracking. Anticipating the market shift that would result from this reduced ability to personalize ads, Meta has been diversifying its revenue by creating in-app shops where it can capture more first-party data based on consumer shopping inside its own platform. It’s also tapping into new revenue streams from the creator economy, like subscriptions and tipping.

The FTC said that investment, romance and e-commerce scams, combined, accounted for 70% of social media scams in 2021, but there were other types of fraud also associated with social platforms. The report did not break these down by category, however.