How Snipd is using AI to ‘unlock knowledge’ in podcasts

Podcasting has emerged as a major billion-dollar industry, with ad revenue in the U.S. alone expected to hit $2 billion this year — a figure that’s set to double by 2024. Against that backdrop, major players in the field are bolstering their podcasting armory, with Spotify recently doling out around $85 million for two companies specializing in podcast measurement and analytics, while Acast recently snapped up Podchaser — an “IMDb for podcasts” that gives advertiser deeper data insights — in a $27 million deal.

But as the big platforms lock horns in the hunt for podcasting riches, smaller players continue to arrive on the scene with their own ideas on how they can advance the podcast medium for creators and consumers alike.

One of these is Snipd, a Swiss startup building a podcast app that uses AI to transcribe content and synchronize with note-taking apps; automatically generate book-style “chapters”; and, as of this week, deliver podcast highlights in a TikTok-style personalized feed.

Similar to other so-called “podcatcher” apps, Snipd works by users searching and subscribing to podcasts that are of interest to them — this could be anything from true crime to history and sport. But Snipd is striving to be much more than another podcatcher, in terms of how it analyzes the content of episodes to help listeners curate and get to the heart of the details that matter.

For example, Snipd can create “chapters,” which separates each episode into navigable segments with their own title, while it can also generate transcripts of entire shows. 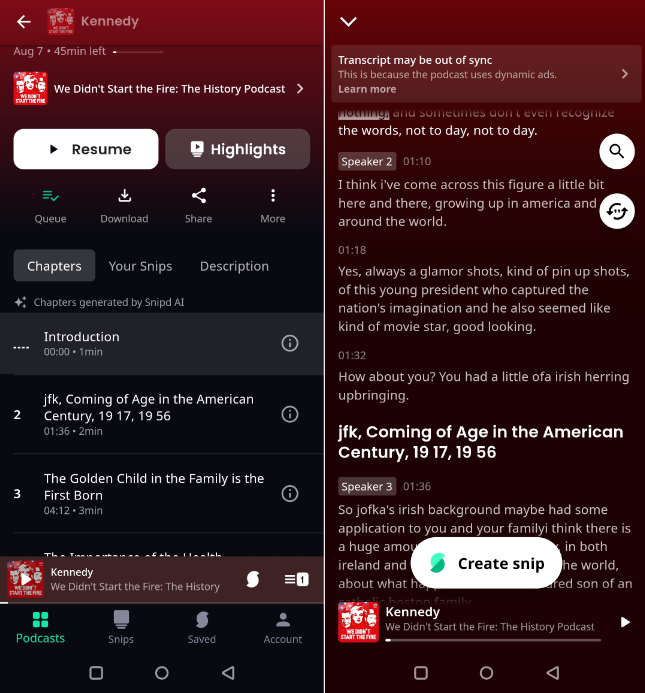 On top of that, users can manually create “snips” as they listen to an episode, allowing them to save their favorite moments and add notes to each clip. 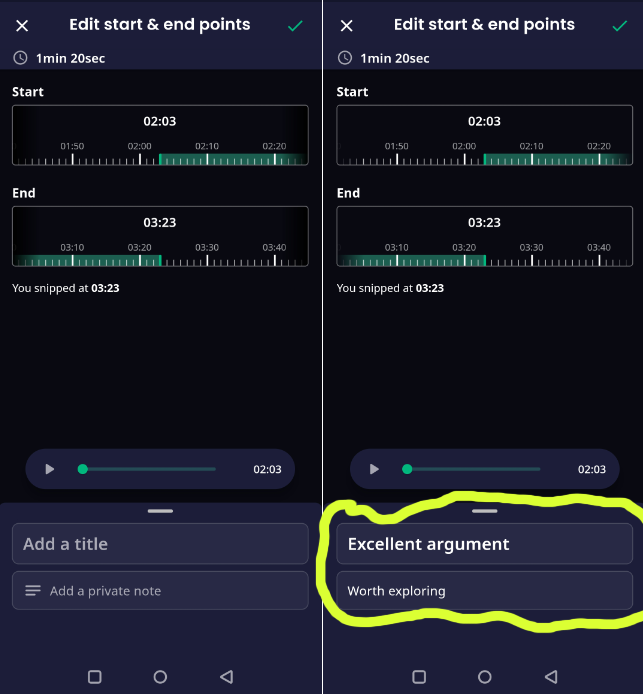 With Snipd’s latest launch, which is available on Android and iOS this week, the company is channeling its inner TikTok by presenting users with a highlights reel, of sorts, automatically pulling out what it believes to be the most memorable moments from numerous podcasts. It then allocates an AI-generated headline to each clip, and presents them in a feed that users can navigate by scrolling up and down.

From there, listeners can save each clip to their library, or — if they like what they’re hearing from the short segment that Snipd has presented — jump directly into the full podcast episode.

It’s worth noting that with the app’s latest update, users are now asked to select their favorite topics (e.g. “history” or “music”), which Snipd uses to generate these highlights. This means that the episode feed is not based purely on users’ podcast subscriptions, as it also pulls in content that Snipd thinks they will be interested in based on their chosen subjects, among other “signals.”

“The goal of the algorithm is to present the user with content they are interested in — for this, we use various signals,” Snipd cofounder Kevin Smith explained to TechCrunch. “Whether the user is subscribed to a certain show is a strong signal, which is why a lot of the shown content comes from a user’s subscriptions. But there are many other important signals such as what the user has listened to, highlighted, and saved, or what is currently trending among other users.”

While this might be construed as a positive move by those looking for help finding new and useful podcasts, it could irk users who only want to see content that they have specifically subscribed to. But Snipd eventually plans to give listeners more granular controls over what content appears in their highlights feed, including the ability to filter out clips from podcasts that they haven’t specifically subscribed to.

It’s also worth stressing that Snipd’s new feed focuses on newly-released podcast episodes, particularly those released in the previous two weeks — in the future, there are plans to adopt an approach that’s more akin to YouTube, in terms of suggesting older content that Snipd thinks is relevant and interesting.

Away from the new TikTok-inspired highlights feed, Snipd users can still access AI-driven highlights for each episode in their main subscriptions list, regardless of how current the episode is.

The app automatically generates highlights for the more popular podcasts, using criteria such as how many of its users are subscribed to a show. And for new or less-popular podcasts, users can manually “request” that Snipd works its magic, so that it gives them highlights, chapters, transcripts, and all the rest within around 20 minutes. 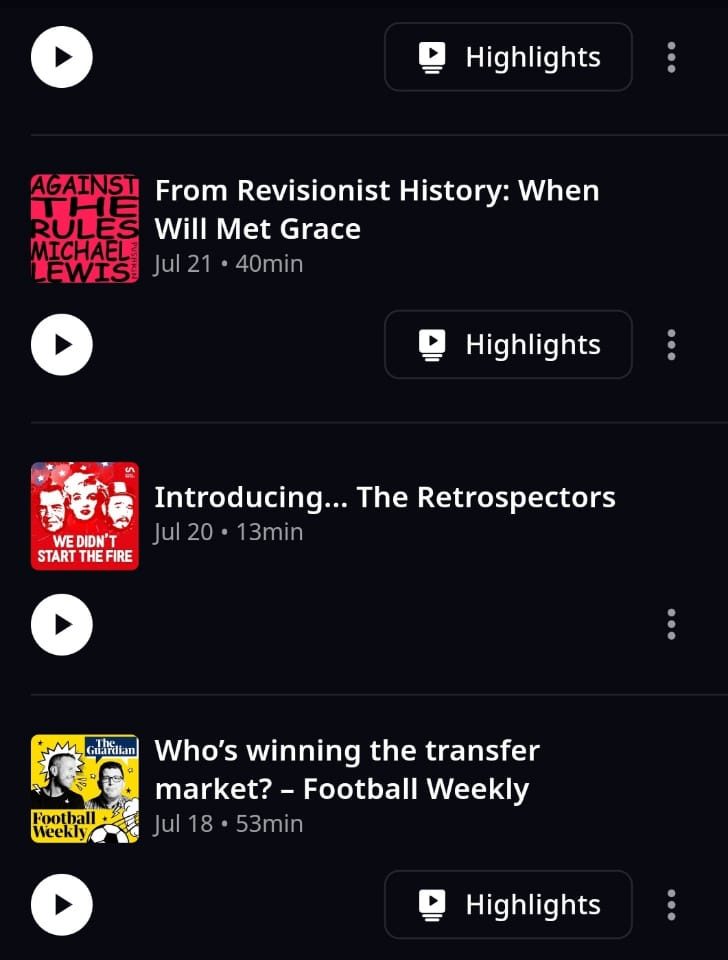 But what, exactly, does Snipd look for when assessing which content to present in its “highlights”? How can it know which segments are more worthy than others? According to Smith, it’s all about how users have interacted with episodes historically — it analyzes which type of content garners the most interest, and then feeds this data back into its AI-training mechanism.

“Our AI learns by analysing the content of old episodes, and comparing which parts of those episodes were highlighted the most by our users and which parts were not,” Smith said. “The most insightful parts of an episode are highlighted frequently by our users, whereas less interesting parts are often skipped and not highlighted. Our AI has learned to use the actual content of the conversation to identify these parts, and can recommend them in new episodes.”

Smith added that Snipd mostly creates its AI models in-house, and for the language models specifically, it starts with large pre-trained models similar to GPT-3, which are already able to understand a great deal about text and language.

“We then fine-tune these models on our very specific use-cases,” Smith noted. “Other models, we train entirely from scratch.
We then use feedback signals from the users to improve the models over time.”

Smith said that in the company’s initial findings, users seemed to use highlights to decide which episode they want to listen to — so they’ll browse through various clips until they find something that grabs them, and then they jump into the full episode. The problem, ultimately, is one of choice overload — similar to how Netflix “suggests” new shows to watch based on subscribers’ viewing habits, and presents a preview of the show on the main menu screen, Snipd is trying to help listeners filter through the podcast noise.

“Our users are sometimes subscribed to over 100 shows, especially those that are very information-rich, like the Lex Fridman Podcast or the Tim Ferriss Show,” Smith said. “These episodes are up to five hours long. This makes it extremely time-intensive for listeners to discover the parts they are interested in the most.”

Some studies suggest that as many as 74% of listeners consume podcasts to “learn something new,” compared to 71% who cite “being entertained” as their main motive and 51% who cited relaxation.

And that is why Snipd’s self-stated mission is to “unlock the knowledge” in podcasts.

“The main problem we are solving is gaining knowledge from podcasts,” Smith explained. “We look at the entire user journey of engaging with knowledge in podcasts and try to improve it. From discovering the best content, consuming it, saving the knowledge the user would like to remember, to sharing it with friends.”

Prior to the latest app update, Snipd has been mostly focused on letting users highlight and save specific knowledge tidbits they come across, so they can revisit later. As such, the app is compatible with headphones, so joggers (for instance) can triple-click the button on their headphones to create and save a clip with an automatically-generated title, summary, and transcript. And given how popular podcasts are with drivers, Snipd also recently rolled out support for Apple’s CarPlay, allowing users to generate podcast highlights while at the wheel.

Snipd supports its “knowledge-unlocking” mission in other ways, too. For example, users can integrate and synchronize Snipd with read-it-later service Readwise and note-taking app Notion if they want to read segments or transcripts from their podcasts. On top of that, users can manually export Snipd content to Obsidian, Logseq, Bear, and Markdown.

Show me the money

Based out of Zurich, Snipd constitutes a team of five, including three cofounders and two employees. The first iteration of the app launched last August, and in the intervening months the company raised an “over-subscribed” $700,000 pre-seed round of funding from backers including early-stage Swiss venture capital (VC) firm Wingman Ventures, as well as U.S.-based VC Acequia Capital, which has previously invested in billion-dollar companies such as Square, Pinterest, and Wish. Smith said that Snipd plans to raise a seed round at some point “in the not-too-distant future.”

All this leads us to a rather important question around finances — how, exactly, does Snipd make money? The short answer is that Snipd doesn’t make money… yet. But in the future, the company plans to adopt a freemium business model à la other similar podcast apps out there, so this could mean a basic free version supported by ads or promoted content, with some of the funky AI-powered smarts pushed behind a paywall.

This also raises questions around how easy it will be to flourish in a market that includes well-established (and well-funded) incumbents such as Apple, Spotify, Acast, and Pocket Casts. Snipd’s AI-powered features are neat for sure, but it’s not clear whether Snipd can garner enough of a user-base to build a significant business. Plus, there are comparable companies out there already, such as Moonbeam, a podcast discovery app that meshes machine learning and human curation to deliver personalized podcast recommendations. And there’s also Airr and Fathom.fm, which are similar in terms of helping listeners get more from their podcasts, either through aiding discovery or letting them pull out the parts they find most interesting.

In truth, Snipd could be an acquisition or acqui-hire in the making. Spotify, for example, already offers transcripts for its own original podcasts, and it’s no stranger to doling out millions of dollars for podcast-focused startups. Amazon also recently rolled out podcast transcriptions.

In a busy space, it’s clear that the major podcast players will continue to seesk new ways to add value and differentiate from the competition, and helping their subscribers to “unlock knowledge” could be another way of doing just that.

“We look at podcasts as one of the largest knowledge-bases in the world, and are hence focused on the knowledge-seeker community,” Smith said. “While our competitors treat podcasts as music which you listen to from start to finish, we look at them as a series of knowledge-rich moments.”