Meesho, a Bangalore-based social commerce startup, has raised $125 million in a new financing round to expand its business in the country and change the way millions shop online.

The Series D round was led by Naspers, and existing investors SAIF, Sequoia, Shunwei Capital, RPS and Venture Highway participating as well. Facebook also participated in the round, so did Arun Sarin, former CEO of Vodafone Group. The four-year-old startup has raised $190 million to date.

Meesho is an online marketplace that connects sellers with customers on social media platforms such as WhatsApp, Facebook, and Instagram. The startup claims to have a network of more than 2 million resellers from 700 towns who largely deal with apparel, home appliances and electronics items.

These resellers are mostly homemakers, most of whom have purchased a smartphone for the first time in recent years. Eighty percent of Meesho’s user base is female. 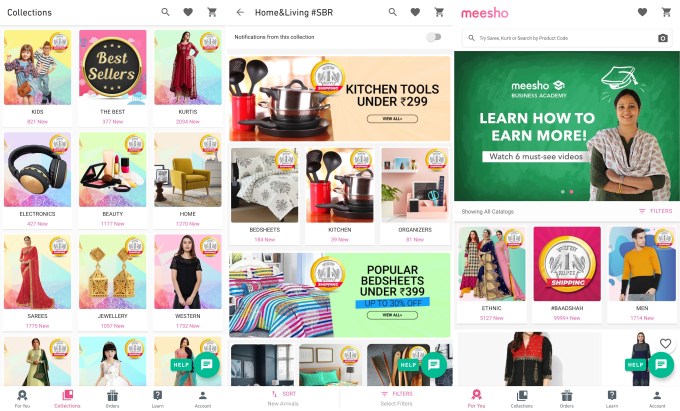 Meesho said the startup will use the fresh capital to expand its reach in the nation and add as many as 18 million new sellers by end of next year. “The latest investment will also strengthen Meesho’s aim to grow its community of women entrepreneurs who have dreamt of running their own businesses but lacked the funds and expertise to do so,” the company said.

More than 90% of businesses in India are still offline and unorganized. Meesho is trying to get these businesses, most of whom don’t have working capital to enable their own online presence, sell online, Vidit Aatrey, Meesho co-founder and CEO, told TechCrunch in an interview.

“I am particularly proud that Meesho has cut across gender, education levels, risk appetites and vocations to create livelihoods for people with no investment of their own. Our social sellers are small retailers, women, students and retired citizens, with 70% being homemakers who have found financial freedom and a business identity without having to step outside their homes,” said Aatrey.

Meesho App: Made in India, Made for India, Solving for the Real India.
Thanks Google Play for the beautiful recognition.

Meesho also plans to use the new funds to further bulk up its technology platform to accommodate new product lines.

“The phenomenal growth they are already experiencing shows that Meesho has hit a sweet spot in the market and is well-poised to serve the next 500 million online shoppers in the country,” said Ashutosh Sharma, Head of India Investments, Naspers Ventures, in a statement.