Indonesia is the latest nation to hit the hammer on social media after the government restricted the use of WhatsApp and Instagram following deadly riots yesterday.

Numerous Indonesia-based users are today reporting difficulties sending multimedia messages via WhatsApp, which is one of the country’s most popular chat apps, and posting content to Facebook, while the hashtag #instagramdown is trending among the country’s Twitter users due to problems accessing the Facebook-owned photo app.

Wiranto, a coordinating minister for political, legal and security affairs, confirmed in a press conference that the government is limiting access to social media and “deactivating certain features” to maintain calm, according to a report from Coconuts.

Rudiantara, the communications minister of Indonesia and a critic of Facebook, explained that users “will experience lag on Whatsapp if you upload videos and photos.”

Facebook — which operates both WhatsApp and Instagram — didn’t explicitly confirm the blockages , but it did say it has been in communication with the Indonesian government.

“We are aware of the ongoing security situation in Jakarta and have been responsive to the Government of Indonesia. We are committed to maintaining all of our services for people who rely on them to communicate with their loved ones and access vital information,” a spokesperson told TechCrunch.

A number of Indonesia-based WhatsApp users confirmed to TechCrunch that they are unable to send photos, videos and voice messages through the service. Those restrictions are lifted when using Wi-Fi or mobile data services through a VPN, the people confirmed.

The restrictions come as Indonesia grapples with political tension following the release of the results of its presidential election on Tuesday. Defeated candidate Prabowo Subianto said he will challenge the result in the constitutional court.

Riots broke out in capital state Jakarta last night, killing at least six people and leaving more than 200 people injured. Following this, it is alleged that misleading information and hoaxes about the nature of riots and people who participated in them began to spread on social media services, according to local media reports. 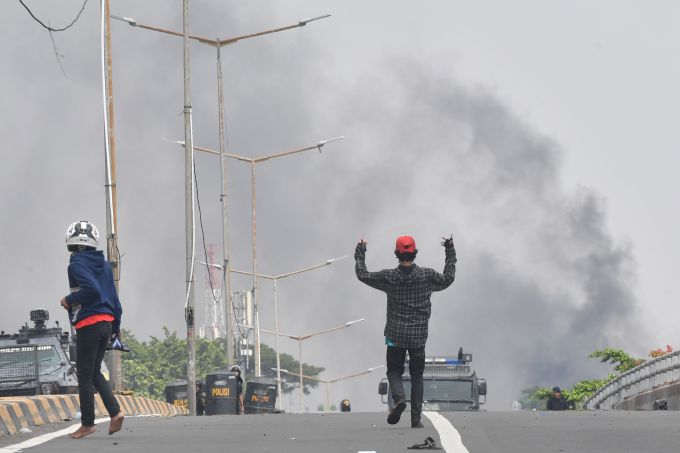 Protesters hurl rocks during clash with police in Jakarta on May 22, 2019. – Indonesian police said on May 22 they were probing reports that at least one demonstrator was killed in clashes that broke out in the capital Jakarta overnight after a rally opposed to President Joko Widodo’s re-election. (Photo by ADEK BERRY / AFP)

For Facebook, seeing its services forcefully cut off in a region is no longer a rare incident. The company, which is grappling with the spread of false information in many markets, faced a similar restriction in Sri Lanka in April, when the service was completely banned for days amid terrorist strikes in the nation. India, which just this week concluded its general election, has expressed concerns over Facebook’s inability to contain the spread of false information on WhatsApp, which is its largest chat app with over 200 million monthly users.

“Facebook can tell you, ‘We are in compliance with the government’. I can tell you how much content we requested to be taken down and how much of it they took down. Facebook is the worst,” he told a House of Representatives Commission last week, according to the Jakarta Post.

Update 05/22 02:30 PDT: The original version of this post has been updated to reflect that usage of Facebook in Indonesia has also been impacted.