Instagram today announced a number of new features that will roll out this week across both the Instagram Feed and its TikTok competitor, Reels. The creator-focused additions will allow users to collaborate with one another, raise funds and make better use of music on Reels, among other things. The company will also make its Instagram desktop website more usable, by allowing people to finally be able to post both photos and videos less than one minute in length using their desktop web browser.

The latter has been a long-requested new feature, the company notes, and will become available to global audiences as of Thursday, October 21.

The company had previously tested the feature this summer, but it was not widely available. 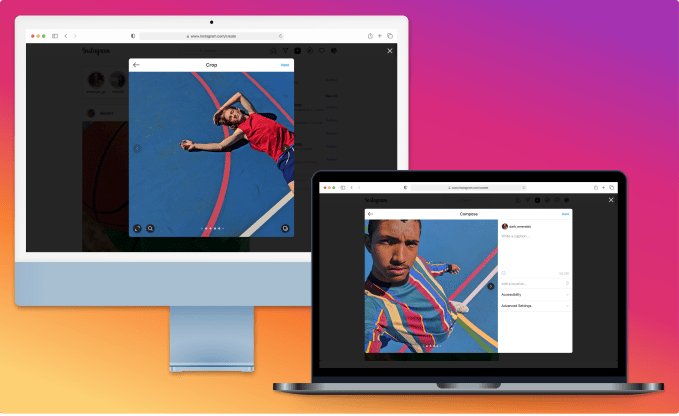 The other new features will drop throughout the week, starting today with “Collabs.”

Instagram describes this feature as a “test,” explaining that it will allow people to co-author both Feed posts and Reels. To do so, users can invite another account to be a collaborator from the tagging screen on Instagram. If the other person accepts, both accounts will appear in the post or the Reels header and content will be shared to both sets of followers. Although Instagram is only announcing the test today, many Instagram users have already spotted the feature in the app, as the company began a small-scale global test of this feature back in July.

(1/3) Collaborating is a huge part of how people connect on Instagram. To make that easier, we’re testing a new way for people to co-author Feed Posts and Reels, called Collab. pic.twitter.com/YD1SaSYHOl

At the time, Instagram said only a small number of people would have access to the feature, and it didn’t indicate when it would roll out more broadly.

On Wednesday, Instagram will also begin to test a new way to create fundraisers for nonprofits, with the introduction of a feature that lets you start the fundraiser directly from the creation button (the “+” plus button at the top right of the screen.). When you tap this option, instead of selecting Post, Story, Reels or Live, you’ll see an option to select a nonprofit and add the fundraiser to your Feed post.

Instagram has supported fundraisers for some time, even adding support for nonprofit fundraising during livestreams last year. But it hadn’t before offered a way to create a fundraiser from a standalone spot right from your Instagram profile.

This feature had been spotted ahead of this week’s launch by developer and reverse engineer Alessandro Paluzzi, who found the new fundraiser button in development back in September.

Two other new additions are meant to enhance Instagram Reels, when used with music.

On Thursday, Instagram will introduce two new effects called Superbeat and Dynamic Lyrics, which will help creators who edit and perform using music on Reels. Superbeat will intelligently apply special effects to music to the beat of the user’s song while Dynamic Lyrics will display 3D lyrics that will flow with the song’s “groove,” says Instagram.

These new features follow TikTok’s rollout of a half dozen interactive music effects back in April, including several that add visual effects synced to the beat of a song. Reels, meanwhile, has offered a much more limited selection of first-party creative effects until now, instead relying on its community to expand its library beyond the basics like a timer or speed adjustment tool, for instance.

The Reels features will arrive alongside posting from the desktop, which Instagram says will be limited to photos and videos less than one minute in length. The company this month dropped its IGTV brand for long-form video, but still allows for videos up to 60 minutes. That’s now just considered “Instagram Video” — a term that includes anything that’s not video in a Story or in Reels.