Instagram now lets you regram your posts to multiple accounts

Instagram is swaying the balance toward simplicity but away from originality. It’s adding the ability to publish feed posts to different accounts you control at the same time by toggling them on within the composer screen. An Instagram spokesperson confirms this option is becoming available to all iOS users, telling TechCrunch, “We are rolling out this feature to provide a better experience for people who often post to multiple accounts.”

This “self regram” could make it easier for businesses, influencers and regular folks with Instas and Finstas to publish the same meme, promotional image or other content across their profiles simultaneously instead of having to post on one at a time. But it could also make Instagram’s feed a bit more cookie-cutter, with different audiences of different accounts seeing the same shots and captions. The desire to keep the feed original and personal has been a driving force behind Instagram refusing to add a native regram feature for sharing other people’s feed posts to your audience. 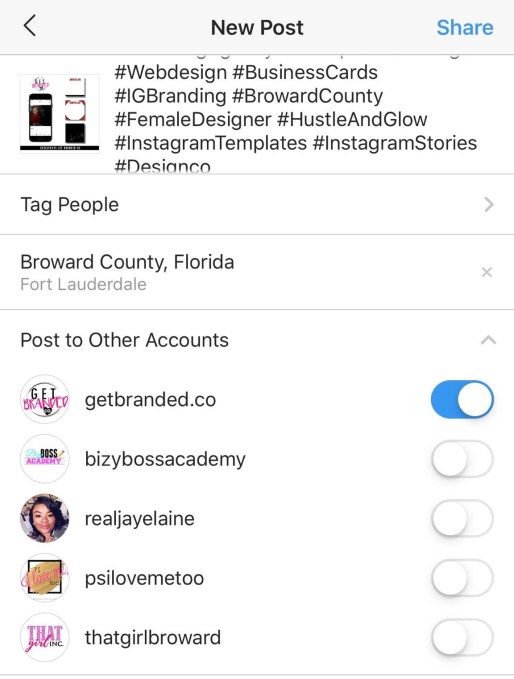 Recontextualizing posts uniquely for different accounts or networks is some of the most common social media guru advice. A personal account might want to publish with a more informal, colloquial and intimate style. A business account might be better off acting generally accessible and adding a call to action. A Finsta, or fake Instagram account people keep on the side for posting more raw content, is free to get a little crazy. An identical one-size-fits-all post might actually be one-size-fits-none. That’s why we’d suggest only using this feature if your different accounts have similar themes and fan bases.

TechCrunch first discovered the feature thanks to a tip from SocialThings founder Zachary Shakked, who says “it could save a tiny bit of time.” Other users, including Jay Elaine’s Get Branded, also showed off the new feature, as seen above. Once users select a photo or video to post, the Instagram for iOS composer screen for adding captions and tags now includes toggle switches for syndicating the post to your other accounts to which you’re logged in. We’ve asked whether the feature will come to Android (I’d assume so in the future) and Stories (anyone’s guess), but Instagram hasn’t responded. You still can’t regram posts by other people, or your own after you publish. 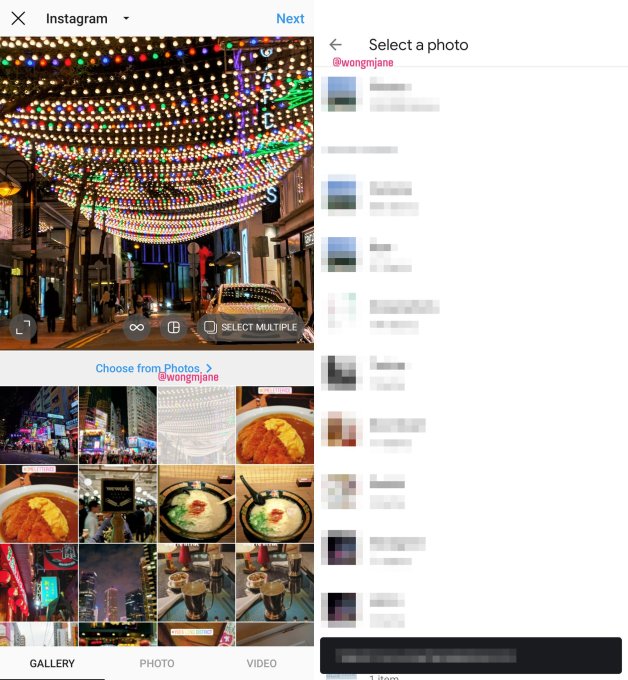 As Instagram grows beyond the 1 billion monthly user mark, it’s working to eliminate friction from content creation wherever it can. Instagram recently began testing a much more prominent shortcut of importing photos from Google Photos on Android. First spotted by mobile researcher and all-star TechCrunch tipster Jane Manchun Wong, the Photos shortcut is now right on the image selection screen for some users instead of being buried within the Other folder of your albums. An Instagram spokesperson confirmed that “We are only testing this on Android. You have been able to share to feed from Google photos on Android before but the ability to do so was hidden behind a couple of different steps so we’re up-leveling that ability to make it easier.”

Simplifying publishing sounds obviously better, but it could also dilute the quality of Instagram. Luckily, the feed’s algorithm can simply demote generic content that doesn’t resonate with people. But if the feed becomes full of stale cross-posted promotional spam, it could send younger users fleeing toward the next generation of social apps trying to spice it up.