Lip-syncing jumpstarted TikTok’s rise to the center of teen culture, arguably displacing Instagram . Now the Facebook-owned app is striking back with a new feature that lets you displays lyrics on your video Story synced to a soundtrack you’ve added with the Music sticker. Lyrics could help creators and their fans sing along, and the visual flare could make the amateur MTV content more watchable.

Instagram scored a big endorsement from teen scare-pop phenomenon Billie Eilish who’s featured in the demo video for Story lyrics, which are now available in all the countries where Instagram Music has launched including the US, Germany, and France. 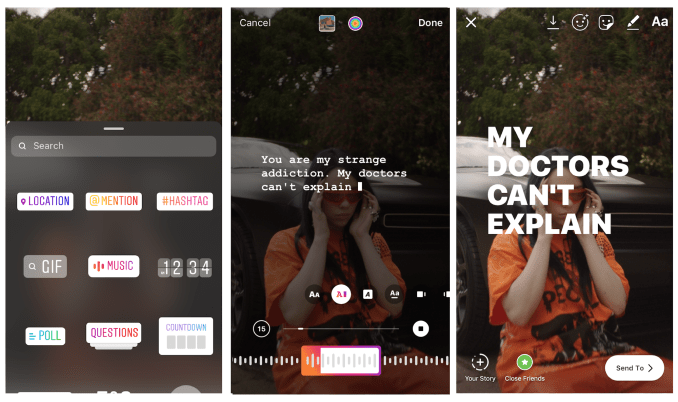 To play with the feature, first select the Music lens type (amidst Boomerang and other options) before you shoot or the Music sticker after. Once you pick a song, you’ll see lyrics pop up which can help you cue the segment of the music you want to play. Then you can cycle through a bunch of animation styles like traditional karaoke teleprompter, a typewriter version that preserves mystery by only revealing lyrics as they’re sung, and big flashy billboard font.

“Music can be a big part of expression on Instagram – between adding music to Stories, connecting with artists, sending song recs back-and-forth, there are lots of ways to connect with music on IG” an Instagram spokesperson tells me. “Now, we’re building on our music features and introducing the ability to add lyrics when you add a song to your story.” As with pretty much everything Instagram launches, it was first dug out of Android code and revealed to the world by frequent TechCrunch tipster and reverse engineering master Jane Manchun Wong. She first spotted Lyrics in March and we wrote about the prototype in April. 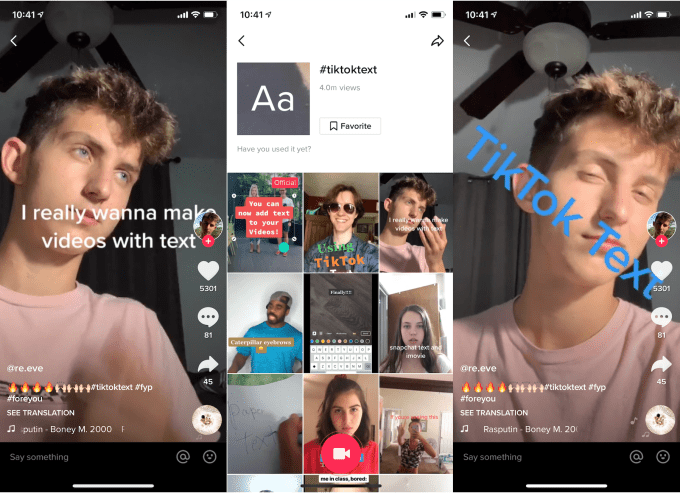 But TikTok isn’t waiting up. Today it launched its own text feature for adding overlaid captions to videos. Typically, creators had to use Snapcat, Instagram Stories, or desktop editing software to add text. Creators are sure to find plenty of hilarious use cases for text on TikTok, and it could help replace the common trope of writing captions on paper and holding them up during clips.

All of these features are about keeping social video from going stale. The manicured, painstakingly posed Instagram aesthetic is over, as The Atlantic’s Taylor Lorenz deftly identified. Fans are sick of perfection, which breeds envy and feels plastic or inauthentic. Comedy, absurdity, and the rough edges of reality are becoming the new ‘look’ of social media. Tools to overlay lyrics and text give creators more freedom to express complex jokes or just act silly. The popularity of Billie Eilish’s own dirtbag chic fashion and willingness to reveal her own insecurities exemplifies this shift, so it’s smart Instagram is using her as the face of its next wave of visual communication.