Instagram has introduced a new “Rage Shake” feature that lets users shake their phones to report a problem with the app. Instagram head Adam Mosseri announced the launch of the new feature in a video on Twitter and explained how it works.

“You ever use Instagram and it wasn’t working like it was supposed to? Maybe Stories didn’t load, maybe the audio wasn’t working, maybe you just couldn’t upload a photo and it was just really getting you, really just pissing you off? Now, you can literally shake the phone and a little option will come up that allows you to report a problem,” Mosseri said in the video.

Did you know about these

s? Any other features you’d like me to cover? Let me know

Once you shake to report, you can explain what happened with the app and report the issue. Mosseri says this will help the company prioritize bugs and learn about other things to fix in the app. For now, the feature is only available in the U.S. for both iOS and Android users.

The social media giant is also rolling out the ability to delete single items from a carousel post with at least three images or videos. For context, carousel feed posts can combine up to 10 photos and videos in one post. With this latest update, you can delete items from an existing carousel. It’s worth noting that you can’t add to the carousel, replace one item for another or reorder items in the carousel. 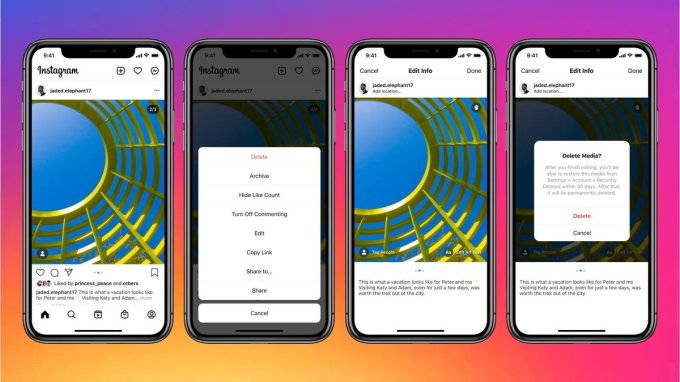 Mosseri says this new option should have been rolled out a while ago and that it was a highly requested feature. The social media giant notes that sometimes users have made a mistake, no longer want a certain photo on their grid but still want to keep the overall carousel, or they just want to change things up with a certain post.

To remove an image or a video from a carousel, you have to tap on the three dots in the right-hand corner of a post and then select “edit.” Then, you can swipe to the photo or image you want to get rid of and click the “delete” icon in the top-left corner. The new feature is currently only available on iOS, with support for Android coming soon.

These two new launches come as Instagram has been introducing several new features over the past few weeks. Last week, it began testing a new feature called “Take a Break,” which allows users to remind themselves to take a break from Instagram after either 10, 20 or 30 minutes. The social media giant also recently rolled out a new “Add Yours” sticker that creates public threads in Stories. The new feature allows users to respond to other users’ Stories with their own following a prompt or a certain topic.

Source: Tech Crunch Social
Instagram rolls out new ‘Rage Shake’ feature and the option to delete posts from a carousel