The announcement comes roughly eight months after LG Electronics said at its press conference that it plans to incorporate NFT features into its smart TV. The platform is now available in the U.S. only to those with LG TV running webOS 5.0 or later and is accessible directly from the home screen.

LG Electronics partnered with the Hedera network to offer an app that enables users to purchase NFTs via Wallypto, LGâ€™s crypto wallet for smartphones.

The partnership between Hedera and LG Electronics was initiated in 2020 when LG joined the Hedera governing council that includes Google, IBM, Deutsche Telekom and the Indian Institute of Technology, and more.

â€śWhile many people have heard of NFTs and would like to participate in the growing ecosystem, it can be overly complex and difficult to get started,â€ť Jo said. â€śLG Art Lab is designed to allow millions of users in the U.S. to easily access and display NFTs, without having to interact with code or directly with a blockchain themselves.â€ť

The NFT platform provides a Drops feature that profiles artists and shows their new artwork previews. Its real-time Live Drops feature gives notifications to help users acquire a dropped NFT to ensure they do not miss an opportunity. 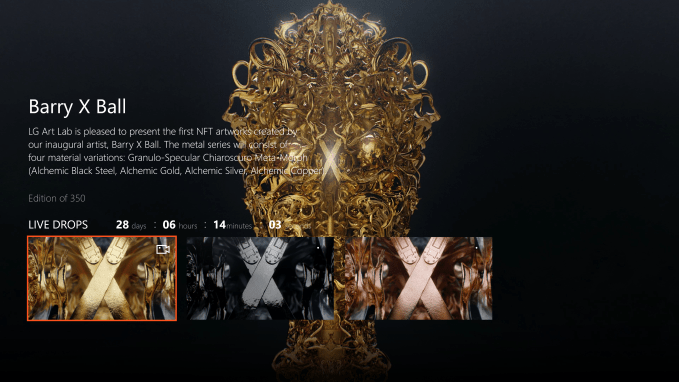 Jo also said that Hedera allows users to transact for less than $0.0001 cent per transaction (with no high gas fee or hidden costs), meaning that there are no hidden costs associated with the NFT platform.

â€śThe Hedera Network consumes vastly less energy than any other public ledger, making it the ideal choice for sustainable initiatives and meaning that it can meet the ESG of modern businesses and investors,â€ť Jo explained. Users can buy, sell and display NFTs on the Hedera network without worrying about the high energy consumption associated with other public networks, he said, adding thatÂ Hedera guarantees a low, predictable fee for users, unlike many other decentralized networks.