After reports that women were already being groped and sexually harassed in Meta’s new VR spaces, Horizon Worlds and Venues, the company formerly known as Facebook last month rolled out a new “Personal Boundary” feature that created a bubble of space with a radius of two virtual feet around each avatar. This prevented avatars from getting within roughly four feet of one another. Today, Meta is customizing this feature by allowing users to optionally turn the setting off, or control when it’s enabled.

Instead of making the boundary default to on for all Horizon Worlds experiences, Meta said today it will allow users to choose whether or not they want the setting enabled for all interactions. Now, VR users will be able to turn their Personal Boundary off, as was the standard prior to the feature’s launch. There is still a small personal boundary to prevent unwanted interactions, the company says — but this was not enough in the past to prevent bad actors from simulating rape in Meta’s virtual worlds, we should note.

However, Meta says it’s adjusting the default setting to keep the Personal Boundary on for non-Friends only, which means it’s dialing back the safety feature a bit. Given that Horizon Worlds is a new social network, people may be friending other users they don’t know in real life after meeting them in the virtual space. That means a user’s friends list may not be quite the same as a list of people the user explicitly trusts. So some caution should still be advised here. 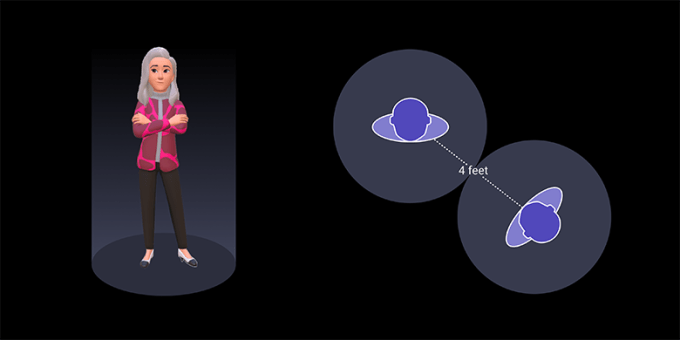 Meta claims the changes were made based on community feedback after February’s rollout of the Personal Boundary feature. The company believes the new options will make it easier for people to high-five, fist-bump and take selfies with other avatars in Horizon Worlds.

In its announcement about the changes, Meta acknowledged that developing for VR represents “what are perhaps some of the hardest challenges we’ve tackled in a generation of computing now that we’re no longer limited by fixed viewpoints and traditional flatscreen devices.”

But this statement seems to throw the blame for its earlier failures to protect women in its VR space solely on the fact that building for VR worlds is something new and, therefore, some trial and error will be involved. But had Meta sought the input of more women engineers or gamers to begin with, it’s hard to imagine this topic wouldn’t have come up. After all, sexual assault in virtual spaces is something that’s happened before, repeatedly — including in other virtual reality games, in VR precursors like Second Life, and even in a children’s virtual game on Roblox. It’s unbelievable that the company would not have considered built-in protections when designing a new VR environment. It also shows Facebook’s tendency to design for growth and scale first and user safety second is also carrying over to its new projects, like Horizon Worlds.

The company says it will continue to iterate and make improvements as it learns more about how Personal Boundary impacts the VR experience.