Microtraction, an early-stage venture capital firm that invests in African startups at the pre-seed stage, is announcing that it has reached the first close of its second fund, Microtraction Community Limited. The fund doesn’t have a set target at the moment, the founding partners told TechCrunch, but it achieved the first close at $15 million.

Microtraction Community Limited seeks to write first checks of $100,000 for 7% into early-stage African startups with an option for a “quick top-up” of up to $350,000, “as long as they are not more than 25% of the company’s next official fundraising round,” the firm noted in its statement.

This second fund plans to invest in 60 startups and provide follow-on investment to 20% of them in their next round. It has already invested in 20 companies from its second fund. Meanwhile, the firm’s first fund wrote checks to 19 companies in four countries: Nigeria, Ghana, Kenya and Rwanda. Both funds target sectors such as fintech, health tech, SaaS, edtech, crypto, gaming and mobility. According to Microtraction, its portfolio companies have received more than $100 million in follow-on funding, collectively valued at over $750 million. A few names include Cowrywise, 54gene, Raise, Helicarrier, Bitsika and Lemonade Finance.

Microtraction is also venturing into the web3 space by setting up a community vehicle (akin to a DAO) where social tokens will be used to incentivize and gamify the experience of members who provide value-add and support to the fund and founders. Microtraction said the DAO will operate on an invite-only basis and launch with various perks such as exclusive access to events, investment opportunities, industry deep dives and more.

TechCrunch caught up with partner Dayo Koleowo and founding partners Kwamena Afful and Yele Bademosi, the co-founder and CEO of African web3 upstart Nestcoin. The partners take us through the difference between the first and second funds and how the firm has evolved since launching in 2017 as the preferred source of pre-seed checks in the African tech landscape.

TC: What was the first fund’s target size and what did the firm hope to achieve with it?

Kwamena Afful: Our first fund was like a proof of concept. We invested like $1 million in total over three years. It was kind of an uncapped approach. Fund one was at a time in the market when nobody was writing checks to young people starting companies.

We think of Microtraction as a product and as founders as our clients. And we ask ourselves, what do founders need us to do for them? And so, five years ago, founders needed a first check more than anything else. And then, they needed people who believed in them and would walk them through the doors of significant African businesses that would try out their product or service. And that’s what we did.

TC: What has changed with Fund 2?

KA: Five years later, there’s a lot of first checks available, way more than they used to be and they are in huge multiples and more. And now, the problems that founders need have changed. And we now think, well, beyond the first check, founders need a community of champions to support them in growing their business. And that community of champions can be a mix of other founders solving similar problems worldwide. And the leading investors, GPs and LPs, in essence, who have subject matter expertise in different sectors and are backing similar companies all over the world. And that’s what Microtraction version 2 is.

We thought to ourselves, let’s get all these champions together in one vehicle. And let’s make them join us on this journey of finding the best African founders. And let’s connect everybody to help each other out. So now, when you get a check from Microtraction, you don’t just get a check but a community of people who want to help you build an African unicorn. And our community might be 50 to 70-strong of investors, but you may only need three to five of them that will play a substantial role in scaling your business. 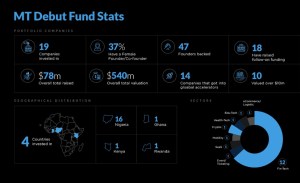 TC: Who is in this community?

TC: In 2020, Microtraction offered $25,000 for 7%, which has been upped to $100,000 for the same stake. It almost mirrors YC’s initial deal begging the question of why founders would pick Microtraction over YC’s, for instance.

Yele Bademosi: In the last two or three years, most companies getting into YC had raised at significant multiples up to $20 million in valuation. But even now, companies that don’t do YC can raise at those valuations before the market downturn. I think it’s pretty interesting that the ecosystem is evolving beyond that. We have a couple of investments that we’ve done that never did YC and their valuations are past the traditional valuation.

People want to get into YC to raise money post YC. So what we’ve done with Microtraction is not just build this community of investors and LPs locally and globally. We also have a broader network of VC funds now, looking at the companies we’re backing, our thesis, strategy, etc. So, we’ve gone from like people seeing us as a pre-YC fund or pipeline to us investing in the best early-stage companies, and then local and global investors looking closely at the deals and following on where there is a fit for them.

Dayo Koleowo: I think it’s very important to highlight the last part Yele mentioned because it’s one of the reasons we have taken our approach. We speak to many global investors almost daily, trying to understand the ecosystem. Many people that invest in African companies tend to go to an accelerator, Demo days, etc. People want direct access to Africa without having to go to accelerators. Things are changing.

Don’t get me wrong, accelerators like YC and 500 startups are still very good. But I think the faster you can raise your money without going to them and the more we see local investors give the same access that YC would provide, the better for the ecosystem. And that’s why it’s crucial that we also improve, not just the check size that we write, but the value we create, which is what we’re doing with the second fund. We’re trying to provide the same value as YC but with a better understanding of the African market, which can help a founder raise better and build more sustainable businesses.

TC: It’s impressive to see how far the fund has come over the years as one of the go-to investors for pre-seed checks to reaching the first close of $15 million as part of a larger uncapped second fund. However, I can’t help but notice that Microtraction’s activity has dipped in the last 18-24 months, or maybe I’m mistaken.

KA: You’re sort of right. When we started Microtraction, it was super innovative. It was what founders needed, and we got a lot of press for that. But then the market evolved, and there were loads of funds and lots of activity. We became caught up in all that noise and I’d say for the last two years, we got approached by DFIs to start another fund.

We entertained that for a while, but we couldn’t go ahead because we needed to find something different with this fund by asking ourselves what founders wanted in this market and what we wanted to do, which we believed was the right thing. So it was a mix of the market getting noisy, us getting drowned by that noise, and also focusing on what we wanted to do next. But we’ve been active the whole time in the background.

So the period where we seemed a bit quiet, we were kind of like rebooting and refreshing, but we were still investing, by the way. In the last fund, we backed like 19 companies, and we’re about to do another 60 in this fund.

YC: Interesting. So how does the web3 play come in?

KA: It reiterates why we think about how founders need a community of champions around them. We wanted to create a community with transparency and incentives for members to help each other out as they spend significant time helping out founders along that journey.

And generally speaking, blockchain technology is an excellent platform for managing communities in a transparent, efficient, and self-rewarded way. Now we don’t think it’s at the point where you can run a DAO to run a fund in the sense that people love to believe it is–it’s not there yet. But what we wanted to do was gamify the process of members of the community, which includes founders, investors, GPs, and LPs, and then subject matter experts on different topics and verticals. So we intend, in short, to launch some social tokens to gamify and incentivize the community members.