Facebook’s social graph is aging, full of long-lost acquaintances and hometown friends you don’t care much about seeing in the News Feed any more. But Facebook is now testing a pivot away from its core identity of connecting you with existing friends so it can revitalize the social graph and keep people coming back. Facebook’s “Meet New Friends” lets you browse people from shared communities such as your school, workplace or city who’ve also opted in to the feature. Announced today at Facebook’s F8 conference, Meet New Friends now in testing in a few markets before it’s rolled out more widely soon.

Meet New Friends could give people fresh pals to follow in their News Feed, or help recently registered users grow their network until they have access to enough content to keep them busy. And eventually, Facebook could layer on monetization features similar to dating apps where users pay to be shown more prominently to potential connections. 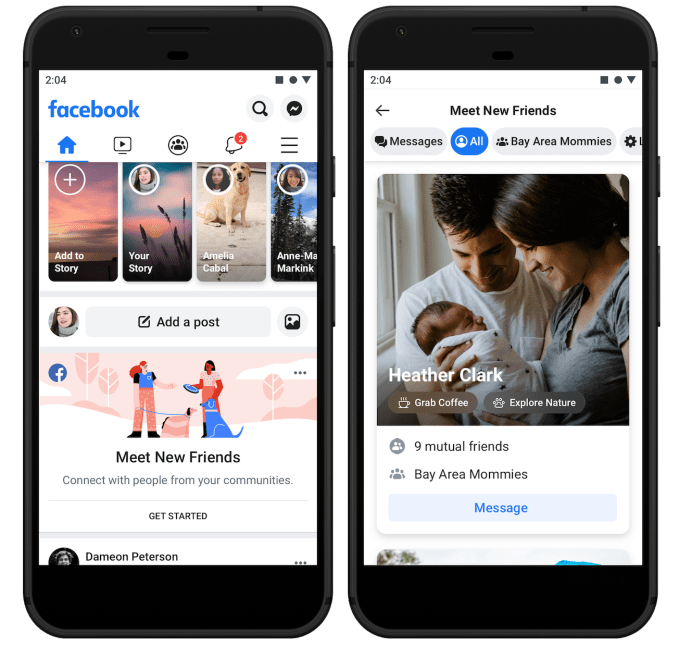 Fidji Simo, the head of Facebook’s main app, tells me Meet New Friends was based on emerging behaviors the company had spotted. “Developing relationships with people they didn’t already know is very different from the core use case of Facebook,” but she notes, “We’ve already seen that naturally happen in Groups, and Meet New Friends will make that a bit easier.”

When users open Meet New Friends, they pick the communities through which they’re open to meeting new friends. For now they choose between schools, employers and locations, but Facebook will eventually add Groups too. In that sense it works a bit like Facebook Dating, which rolls out to 14 new countries today and opens to dating friends with its new Secret Crush feature.

Algorithms will sort potential connections by who is most relevant, such as those with mutual friends or shared interests, but you won’t get “matched” where both users have to state their interest in the other. Instead, users can just browse profiles, and then either send people a friend request (which might feel a bit out of the blue), or send them a single text-only message to a recipient’s dedicated Meet New Friends chat inbox. They can’t message that same person again until they respond (to prevent spamming), and the text-only limitation ensures no unsavory photos get blasted around. If they do reply, the thread moves to Facebook Messenger.

Meet New Friends will pit Facebook against a range of other apps, from local-focused Meetup and Nextdoor to verticalized apps like Hey Vina for women only to dating-affiliated apps like Bumble BFF. But Facebook benefits from its ubiquity, so users can try Meet New Friends without feeling embarrassed by downloading an app just to make them less lonely. 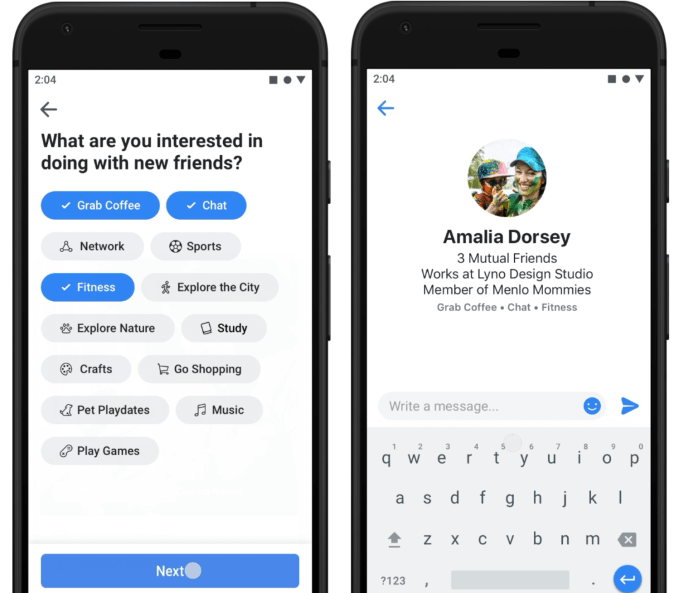 For years, the mildly creepy People You May Know feature has been a cornerstone of Facebook’s growth strategy. But it’s still just about recreating your offline social graph online. As Facebook strives to become more meaningful to people’s lives, fostering new friendships could give people a fuzzy feeling about the giant corporation.