A new report out this morning from Pew Research Center offers insight into the U.S. adult Twitter population. The firm’s research indicates the Twitterverse tends to skew younger and more Democratic than the general public. It also notes that the activity on Twitter is dominated by a small percentage — most users rarely tweet, while the most prolific 10 percent are responsible for 80 percent of tweets from U.S. adults.

Pew says only around 22 percent of American adults today use Twitter, and they are representative of the broader population in some ways, but not in others.

For starters, Twitter’s U.S. adult users tend to be younger.

Indeed, 42 percent of adult Twitter users in the U.S. have at least a bachelor’s degree, which is 11 percentage points higher than the share of the public with this level of education (31 percent). Likely related to this is a higher income level; 41 percent of Twitter users have a household income above $75,000, which is 9 points higher than the same figure in the general population (32 percent).

Despite these differences, there are areas where Twitter users are more like the general U.S. adult population — specifically, in terms of the gender and racial makeup, Pew says.

In addition to the makeup of the adult population on Twitter, Pew also researched the activity on the platform and found that the median user only tweets twice per month.

That means the conversation on Twitter is dominated by extremely active (or, in their parlance, “extremely online“) users. That means a large majority of Twitter’s content is created by a small number — 10 percent of users are responsible for 80 percent of all tweets from U.S. adults on Twitter. 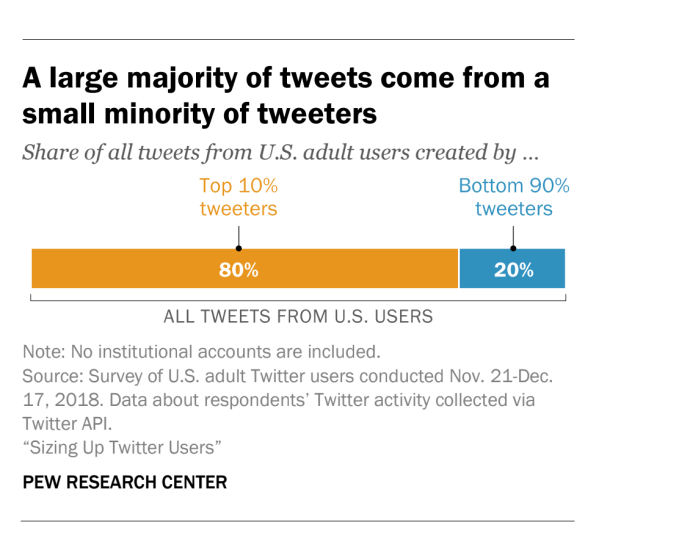 The median user in this top 10 percent creates 138 tweets per month, favorites 70 posts per month, follows 456 accounts and has 387 followers. They tend to be women (65 percent are), and tend to tweet about politics (69 percent say they do). They also more often use automated methods to tweet (25 percent do).

Meanwhile, the median users in the bottom 90 percent creates two tweets per month, favorites one post per month, follows 74 accounts and has 19 followers; 48 percent are women, and 39 percent tweet about politics. Only 13 percent say they tweeted about politics in the last 30 days, compared with 42 percent of the top 10 percent of users. They also are less likely to use automated methods of tweeting, as only 15 percent do.

These differences lead to other ways where how the Twitterverse feels about key issues — like equality or immigration — differs from the general public, with viewpoints that lean more Democratic.

It’s worth noting, too, how the small amount of activity from a large group of Twitter users also speaks to Twitter’s inability to grow its monthly active user base (MAUs).

This week, Twitter reported its first-quarter earnings and noted that its MAUs were 330 million in Q1, down by 6 million users from a year ago. Twitter now prefers to report on its monetizable daily active users — a metric that favors the app’s heavier users.