On the heels of Clubhouse’s latest fundraise, Reddit today officially unveiled its Clubhouse rival Reddit Talk following a recent report from Mashable that revealed the company had been developing audio-based social networking features. Like many of the newly launched Clubhouse clones, Reddit’s voice chat experience hasn’t deviated much from Clubhouse’s overall design where speakers sit at the top of the screen in a stage area of sorts, and listeners appear below — all with rounded profile icons, plus tools to react or raise a hand to ask to speak.

In Reddit’s case, however, it’s repurposed this Clubhouse-style format for its own communities, known as subreddits. Initially, Reddit Talk will live within subreddits, which are individual forums focused on a given topic or theme. Those community’s moderators will be the only ones able to start a talk for the time being, as the audio feature is still being tested, Reddit says.

These moderators will be given tools that allow them to invite users to join, mute participants, and remove speakers during the live sessions. They can also ban unwanted users from the talk entirely and stop them from being able to rejoin.

Although only the subreddit moderators can start talks, once they are underway, they can invite anyone they choose to join them to speak. The other users can listen to the Reddit Talk sessions across both iOS and Android. 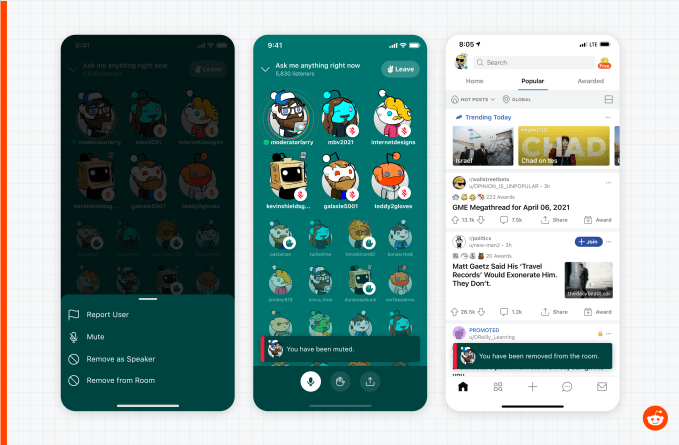 While the overall style is very much Clubhouse-like, Reddit has added its own touches. For example, users can react to speakers using a different set of emojis than you might find on rival services. Reddit’s product images today showed reactions that included popular Reddit designs like a rocket ship, the Reddit alien, and the diamond emoji, among others. Reddit says it’s currently testing a way for moderators to customize the background colors and the emoji used in their own communities when they launch Reddit Talk. They’re also able to change their own avatar’s appearance to fit the talk, too.

The company is currently developing other features designed specifically to support AMAs and other types of conversations, it also noted.

In the comments of the Reddit Talk announcement, Reddit responded to questions from users about why it’s doing this, and acknowledged the Clubhouse similarities. 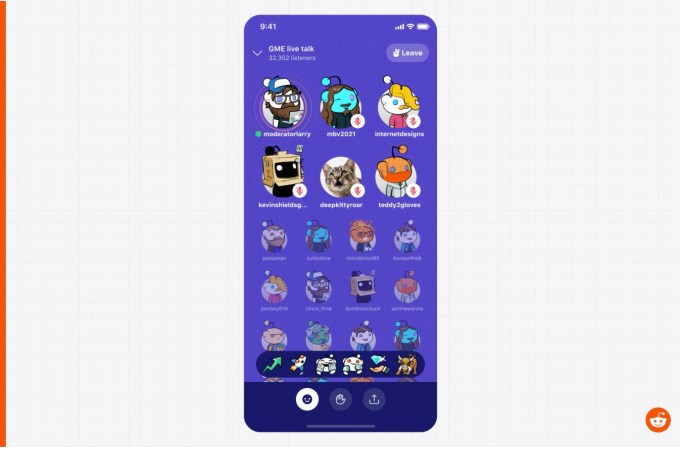 “We believe that there is more to offer here by letting users have real-time live voice discussions with others in their communities — maybe talking about a sporting event while it’s on TV or listening to a casual chat or AMA with field experts,” Reddit’s Product Lead for creators wrote. “Yes, there are a few different platforms diving into live audio right now. Our hope is that by announcing this early with a community-first design, we will see engaging conversations hosted first by moderators, who we’ll be working with closely to ensure we’re creating a unique, supportive, and positive user experience,” the comment read.

There are more than a “few” other platforms now building out Clubhouse clones at this point, of course. Facebook has several tools on the way, Twitter has Spaces, and there are audio platforms in various stages of development from Discord, Telegram, Spotify and even LinkedIn, in the works.

Reddit Talk is not publicly available as it’s in a test period. But community moderators can join a waitlist to be alerted as to when they can try out the feature for themselves. After the test period, Reddit says it will work with moderators to allow other trusted users to host talks through the new feature, too.