Reliance Jio to spend $25B on 5G rollout, debut in October and reach every town by 2023 end

Reliance Jio Infocomm, India’s top telecom mobile operator, has earmarked a spending of $25 billion on the rollout of its 5G services that it plans to debut in key cities this Diwali in October, the company announced at its annual general meeting Monday. The company, which has amassed over 421 million telecom subscribers, will extend its 5G network to “every town” in India by the end of 2023, it said.

The company unveiled the AirFiber, a wireless plug-and-play 5G hotspot that doesn’t require fiber cables to reach homes, he said.

“Jio has developed a JioAirFiber Home Gateway, which is a wireless, simple, single-device solution to have a Wi-Fi hotspot in a home, connected to ultra-high-speed internet using true 5G,” it said.

“With single device JioAirFiber, it will be real easy to quickly connect any home or office to Gigabit-speed Internet. With the simplicity of JioAirFiber, hundreds of millions of homes and offices can be connected to ultra-high-speed broadband in a very short period. With it, India can rank among the top 10 nations, even for fixed broadband.”

The announcement follows tycoon Ambani’s Jio — which counts Google and Meta among its backers — spending $11.13 billion to buy more 5G airwaves than any other telecom operator in the country. 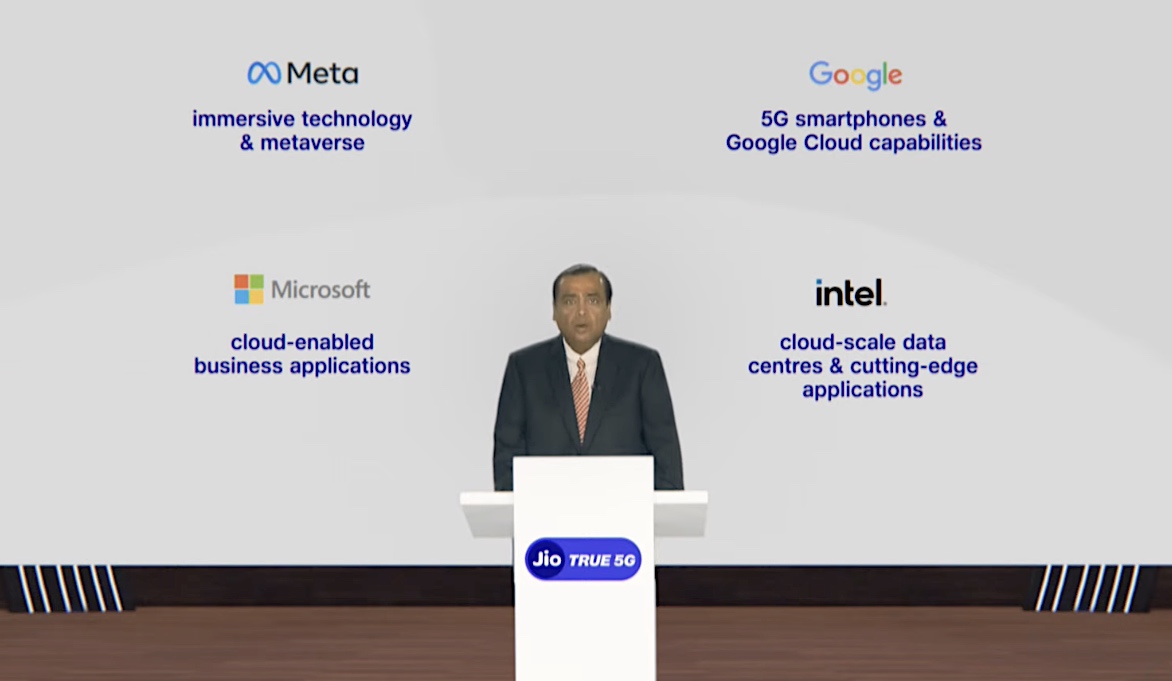 The company is working with Meta, Google, Microsoft, Intel and Qualcomm to broaden their joint collaborations, Ambani said.

With Meta, Jio is working to develop immersive technology and metaverse, whereas the Indian firm and Google are working on ultra-affordable 5G smartphones as well as collaborating on Google Cloud in the country, he said. Microsoft and Jio inked a deal in 2019 to bring Office 365 and other solutions to small businesses. The companies said they are working on broadening their business applications offerings.

Jio said it is also expanding its partnership with Qualcomm to develop 5G solutions for India, which both the firms believe can be expanded outside of the country.

Jio Platforms is looking to offer a range of sophisticated offerings including simultaneous camera-viewings for live cricket matches, it said. Viacom18 — a venture between Ambani’s Reliance and Paramount — scored the streaming rights for Indian Premier League cricket tourney in the Indian subcontinent region with a bid of $3 billion recently, beating rivals including Disney. The company is also exploring 5G applications in virtual reality, augmented reality, healthcare and agriculture, said Ambani.

Reliance, a $221 billion empire, is also venturing into the business of cloud PC, with a service called Jio Cloud PC, Ambani said. “With no upfront investment or tension of periodical upgrading, a user needs to pay only to the extent used, resulting in a super-affordable way to bring the power of a PC, even multiple PCs, to every Indian home and business,” the company said.

Source: Tech Crunch Social
Reliance Jio to spend B on 5G rollout, debut in October and reach every town by 2023 end