Could avatars that show what co-workers are up to save work-from-home teams from constant distraction and loneliness? That’s the idea behind Pragli, the Bitmoji for the enterprise. It’s a virtual office app that makes you actually feel like you’re in the same building.

Pragli uses avatars to signal whether co-workers are at their desk, away, in a meeting, in the zone while listening to Spotify, taking a break at a digital virtual water coooler or done for the day. From there, you’ll know whether to do a quick ad hoc audio call, cooperate via screenshare, schedule a deeper video meeting or a send a chat message they can respond to later. Essentially, it translates the real-word presence cues we use to coordinate collaboration into an online workplace for distributed teams.

“What Slack did for email, we want to do for video conferencing,” Pragli co-founder Doug Safreno tells me. “Traditional video conferencing is exclusive by design, whereas Pragli is inclusive. Just like in an office, you can see who is talking to who.” That means less time wasted planning meetings, interrupting colleagues who are in flow or waiting for critical responses. Pragli offers the focus that makes remote work productive with the togetherness that keeps everyone sane and in sync.

The idea is to solve the top three problems that Pragli’s extensive interviews and a Buffer/AngelList study discovered workers hate: 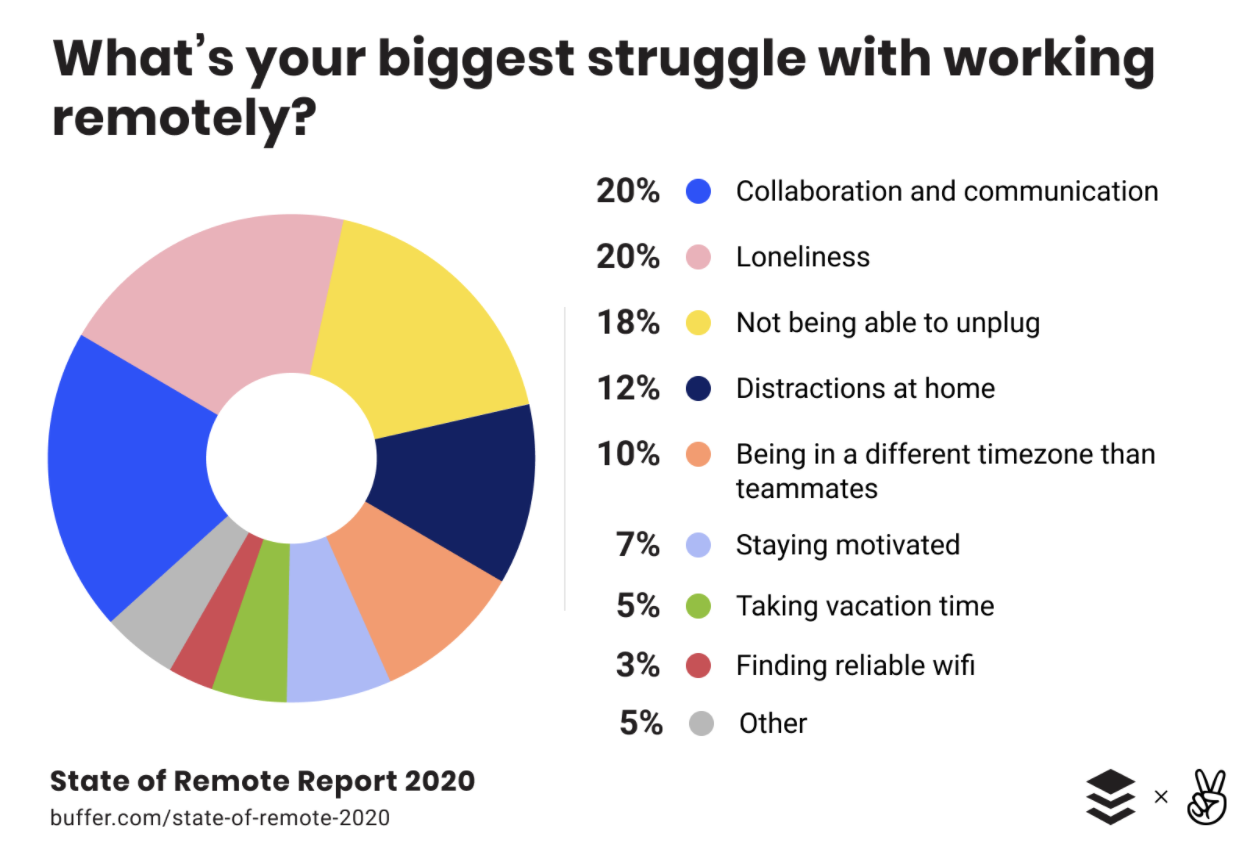 You never have to worry about whether you’re intruding on someone’s meeting, or if it’d be quicker to hash something out on a call instead of vague text. Avatars give remote workers a sense of identity, while the Pragli water cooler provides a temporary place to socialize rather than an endless Slack flood of GIFs. And because you clock in and out of the Pragli office just like a real one, co-workers understand when you’ll reply quickly versus when you’ll respond tomorrow unless there’s an emergency.

“In Pragli, you log into the office in the morning and there’s a clear sense of when I’m working and when I’m not working. Slack doesn’t give you a strong sense if they’re online or offline,” Safreno explains. “Everyone stays online and feels pressured to respond at any time of day.” 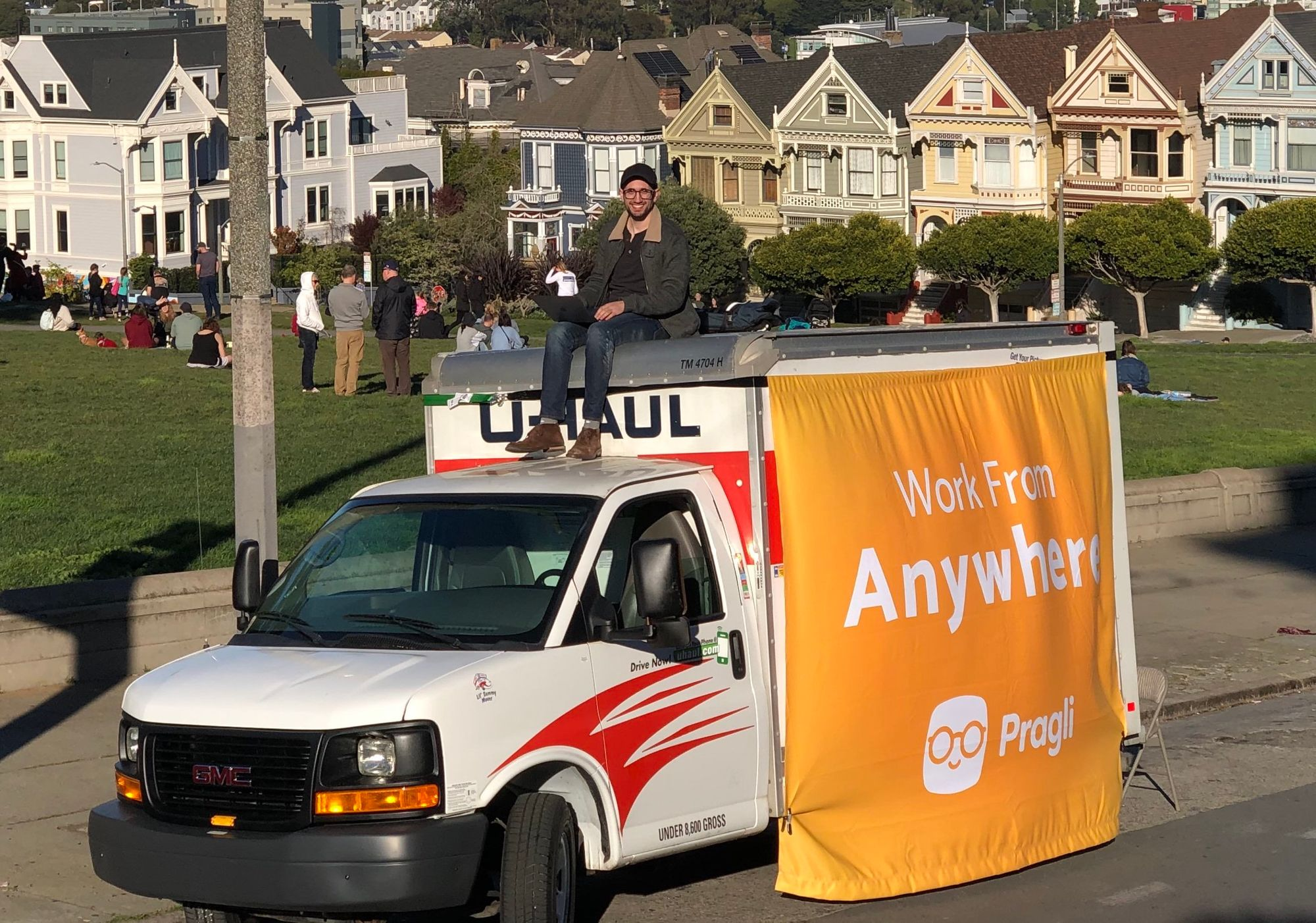 Safreno and his co-founder Vivek Nair know the feeling first-hand. After both graduating in computer science from Stanford, they built StacksWare to help enterprise software customers avoid overpaying by accurately measuring their usage. But when they sold StacksWare to Avi Networks, they spent two years working remotely for the acquirer. The friction and loneliness quickly crept in.

They’d message someone, not hear back for a while, then go back and forth trying to discuss the problem before eventually scheduling a call. Jumping into synchronous communicating would have been much more efficient. “The loneliness was more subtle, but it built up after the first few weeks,” Safreno recalls. “We simply didn’t socially bond while working remotely as well as in the office. Being lonely was de-motivating, and it negatively affected our productivity.”

The founders interviewed 100 remote engineers, and discovered that outside of scheduled meetings, they only had one audio or video call with co-workers per week. That convinced them to start Pragli a year ago to give work-from-home teams a visual, virtual facsimile of a real office. With no other full-time employees, the founders built and released a beta of Pragli last year. Usage grew 6X in March and is up 20X since January 1.

Today Pragli officially launches, and it’s free until June 1. Then it plans to become freemium, with the full experience reserved for companies that pay per user per month. Pragli is also announcing a small pre-seed round today led by K9 Ventures, inspired by the firm’s delight using the product itself.

To get started with Pragi, teammates download the Pragli desktop app and sign in with Google, Microsoft or GitHub. Users then customize their avatar with a wide range of face, hair, skin and clothing options. It can use your mouse and keyboard interaction to show if you’re at your desk or not, or use your webcam to translate occasional snapshots of your facial expressions to your avatar. You can also connect your Spotify and calendar to show you’re listening to music (and might be concentrating), reveal or hide details of your meeting and decide whether people can ask to interrupt you or that you’re totally unavailable. 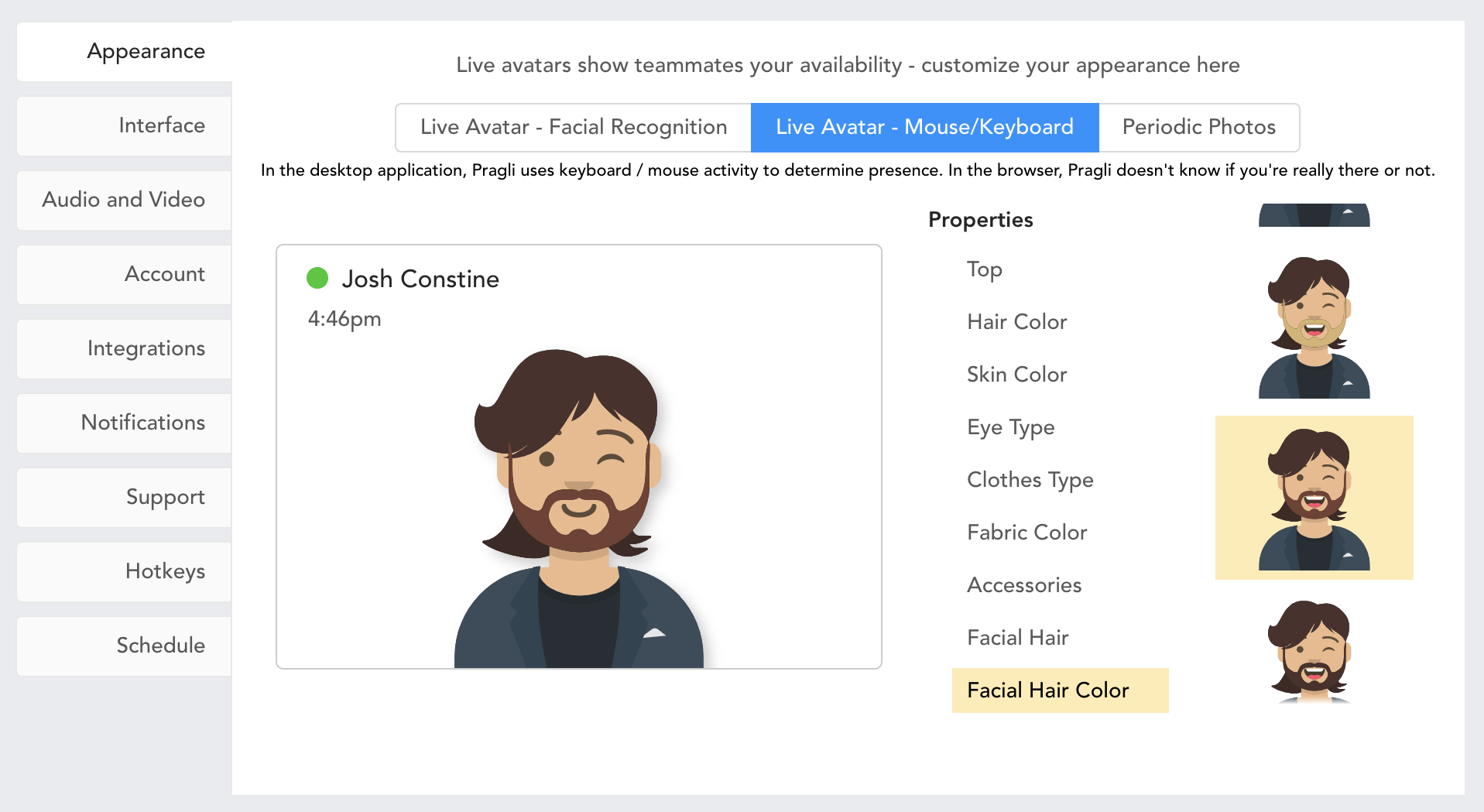 From there, you can by audio, video or text communicate with any of your available co-workers. Guests can join conversations via the web and mobile too, though the team is working on a full-fledged app for phones and tablets. Tap on someone and you can instantly talk to them, though their mic stays muted until they respond. Alternatively, you can jump into Slack-esque channels for discussing specific topics or holding recurring meetings. And if you need some down time, you can hang out in the water cooler or trivia game channel, or set a manual “away” message.

Pragli has put a remarkable amount of consideration into how the little office social cues about when to interrupt someone translate online, like if someone’s wearing headphones, in a deep convo already or if they’re chilling in the microkitchen. It’s leagues better than having no idea what someone’s doing on the other side of Slack or what’s going on in a Zoom call. It’s a true virtual office without the clunky VR headset.

“Nothing we’ve tried has delivered the natural, water-cooler-style conversations that we get from Pragli,” says Storj Labs VP of engineering JT Olio. “The ability to switch between ‘rooms’ with screen sharing, video and voice in one app is great. It has really helped us improve transparency across teams. Plus, the avatars are quite charming as well.”

With Microsoft’s lack of social experience, Zoom consumed with its scaling challenges and Slack doubling down on text as it prioritizes Zoom integration over its own visual communication features, there’s plenty of room for Pragli to flourish. Meanwhile, COVID-19 quarantines are turning the whole world toward remote work, and it’s likely to stick afterwards as companies de-emphasize office space and hire more abroad. 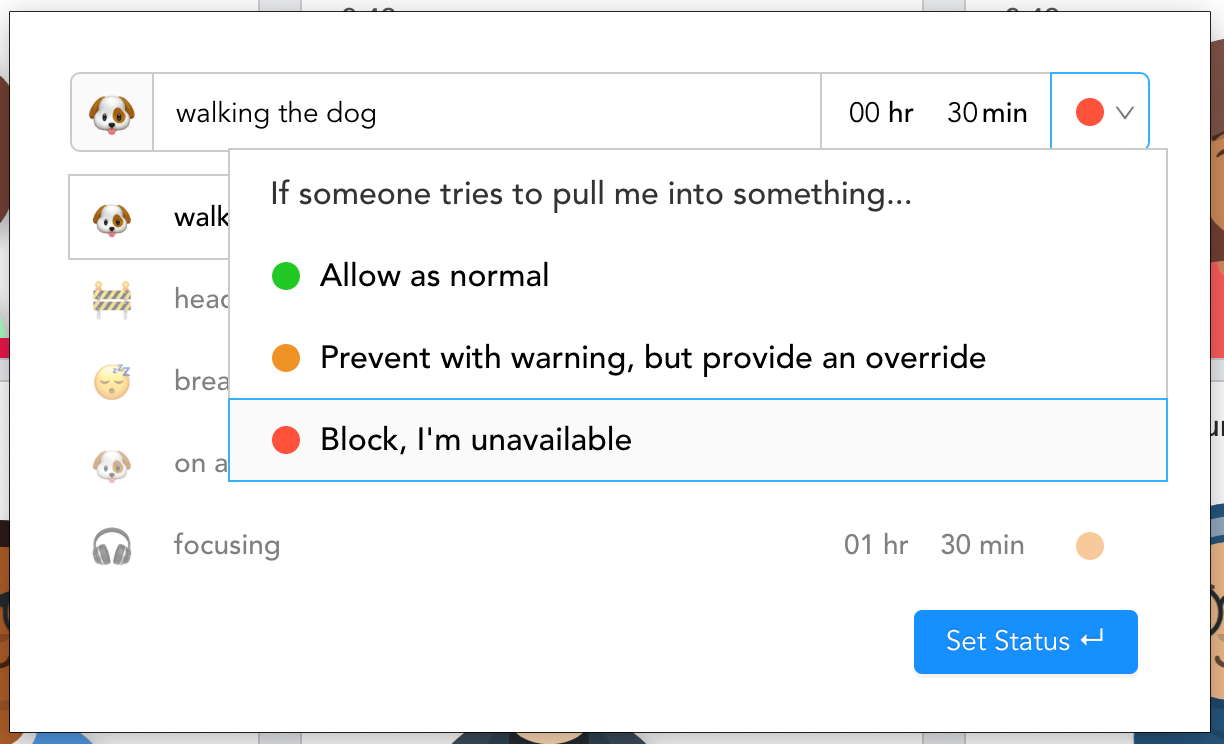 The biggest challenge will be making comprehensible enough to onboard whole teams such a broad product encompassing every communication medium and tons of new behaviors. “How do you build a product that doesn’t feel distracting like Slack but where people can still have the spontaneous conversations that are so important to companies innovating?,” Safreno asks. The Pragli founders are also debating how to encompass mobile without making people feel like the office stalks them after hours.

“Long-term, [Pragli] should be better than being in the office because you don’t actually have to walk around looking for [co-workers], and you get to decide how you’re presented,” Safreno concludes. “We won’t quit, because we want to work remotely for the rest of our lives.”