Chat platforms like Slack have been game-changers when it comes to what business users want and expect out of their work communications. Today, a company that’s aiming to move the goalpost again with an integrated, open-source alternative is announcing some funding to fuel its growth.

Rocket.Chat, a startup and open-source-based platform of the same name used by banks, the U.S. Navy, NGOs and other organizations big and small to set up and run any variety of secure virtual communications services from one place — they can include not just team chat, but also customer service, collaboration platforms covering your staff and outside partners, school classrooms, conferences and more — has raised $19 million.

The company plans to use the funding both to continue adding more customers, but also expanding the platform’s functionality, including more security features, a way to use the service over federated blockchain architecture, apps for marketplaces, options for bots, and more social media and omnichannel customer service integrations, and potentially facilities for virtual events.

As more business interactions have gone virtual, it has essentially opened the door for companies like Rocket.Chat building virtual communications platforms to build in an increasing number of features into what it does.

The Series A round of funding has four lead investors — Valor Capital Group, Greycroft, Monashees and NEA — with e.ventures, Graphene Ventures, ONEVC and DGF also participating. The Porto Alegre, Brazil-based startup (which is incorporated in Delaware) has now raised $27 million to date.

Rocket.Chat is not disclosing its valuation with this round, but it comes on the back of some significant growth in the last year. The startup now has 16 million registered users across 150 countries, with eight million of them monthly active users. Of that 16 million, 11.3 million users registered for the service in the past six months. It’s currently installed on some 845,000 servers, the company said, and has over 1,500 developers building on its platform.

Rocket.Chat’s funding and expanding business comes as part of a bigger focus overall for open-source platforms.

The promise of open source in the world of enterprise IT has been that it provides a platform to customise a service to fit with how the organization in question wants to use it, while at the same time providing tools to make sure it is robust enough in terms of security, extensibility and more for use in a business environment.

Over the years, it has become a big business opportunity, in line with organizations getting more sophisticated in terms of what they expect and need out of their IT services, where off-the-shelf apps may not always fit the bill.

Rocket.Chat positions itself as something of an all-in-one superstore for any and all communications needs, with organizations putting their own services together in whatever way works for their purposes.

It can either be hosted and managed by customers themselves, or used as a cloud-based SaaS, with its pricing ranging between free (for minimal, self-hosted services) to $4 per user per month, or higher, depending on which services customers want to have, whether its hosted and how much the platform is being used each month. 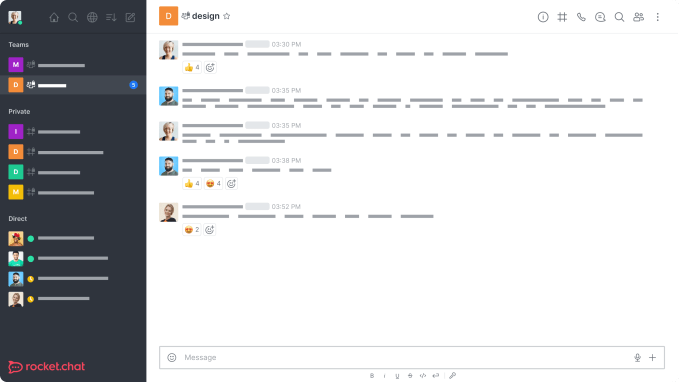 As you can see in the mock-up here, its basic platform looks a little like Slack. But if you are using it for omnichannel communications for customer service, for example, you can build a platform within Rocket.Chat where you incorporate communications from any other platforms that might be used to communicate with customers.

Its work collaboration platform starts with Rocket.Chat’s basic chat interface, but also allows you to integrate alerts and links to other apps that you regularly use, as well as video calls and more. These and other functions built on Rocket.Chat can then be made to interact with each other — for example handing tickets off in customer service to internal tech support teams — or separately.

The idea is that by providing a version that can be hosted and managed by organizations themselves, it gives them more privacy and control over their electronic messaging.

Its thousands of customers reflect an interesting mix of the kinds of organizations that are looking for solutions that do just that.

Gabriel Engel, the CEO and founder, tells me the list includes several military and public sector organizations including the U.S. Navy, financial services companies like Credit Suisse and Citibank, as well as the likes of Cornell, Arizona State, UC Irvine, Bielefeld University and other educational institutions, and a number of other private companies.

That flexibility does not always play to Rocket.Chat’s advantage, however. Controversially, it seems that the list also includes the other end of the spectrum of organizations that want to keep their messages limited to a very specific audience: Islamic State it turns out also hosts and runs a Rocket.Chat to disseminate messages.

Engel says that while this is not something that the company supports, and that it works with authorities to shut down users like these as much as it can, it’s a consequence of how the service was built:

“We are not able to track usage if they are running Rocket.Chat servers of their own,” he said. “There’s a reason why the U.S. Navy uses Rocket.Chat. And that’s because we cannot track and know what they’re doing. It’s isolated from any external influence, for better or worse.” He added that the company has policies so that if an illicit organization is using its SaaS version, these get taken down in cooperation with authorities. “But just as with Linux, if you download and run Rocket.Chat on your own computer, then obviously it’s out of our reach.”

Hearing about how a platform built with privacy by design can be abused, with seemingly little to be done about it, does seem to offset some of the benefits. The ethics of that predicament, and whether technology can ever solve it, or whether it will be up to government authorities to address, will continue to be a question not just for Rocket.Chat but for all of us.

In the meantime, investors are interested because of the alternative it provides to those groups that need it.

“In today’s environment, organizations must have a secure communication platform to engage teams internally, communicate with customers and partners externally, and connect with safe interest-based communities,” said Dylan Pearce, partner at Greycroft, in a statement. “Rocket.Chat’s world-class management team and open-source community lead the industry in innovation and provide a communications platform capable of serving every person on the planet.”