At a time when immigration and border issues are foremost on Americans’ minds, the integrity of the men and women who enforce those policies is similarly important. Unfortunately, a private Facebook group for Border Patrol officers shows extremely troubling conduct — and shows the limits of such groups for those wishing to engage in bad behavior online.

Documented in a report by ProPublica, which was sent screenshots of a variety of posts and comments from it, the group is known as “I’m 10-15.” That’s code in the Border Patrol agency for “aliens in custody,” i.e. that someone attempting to cross the border illegally has been apprehended. 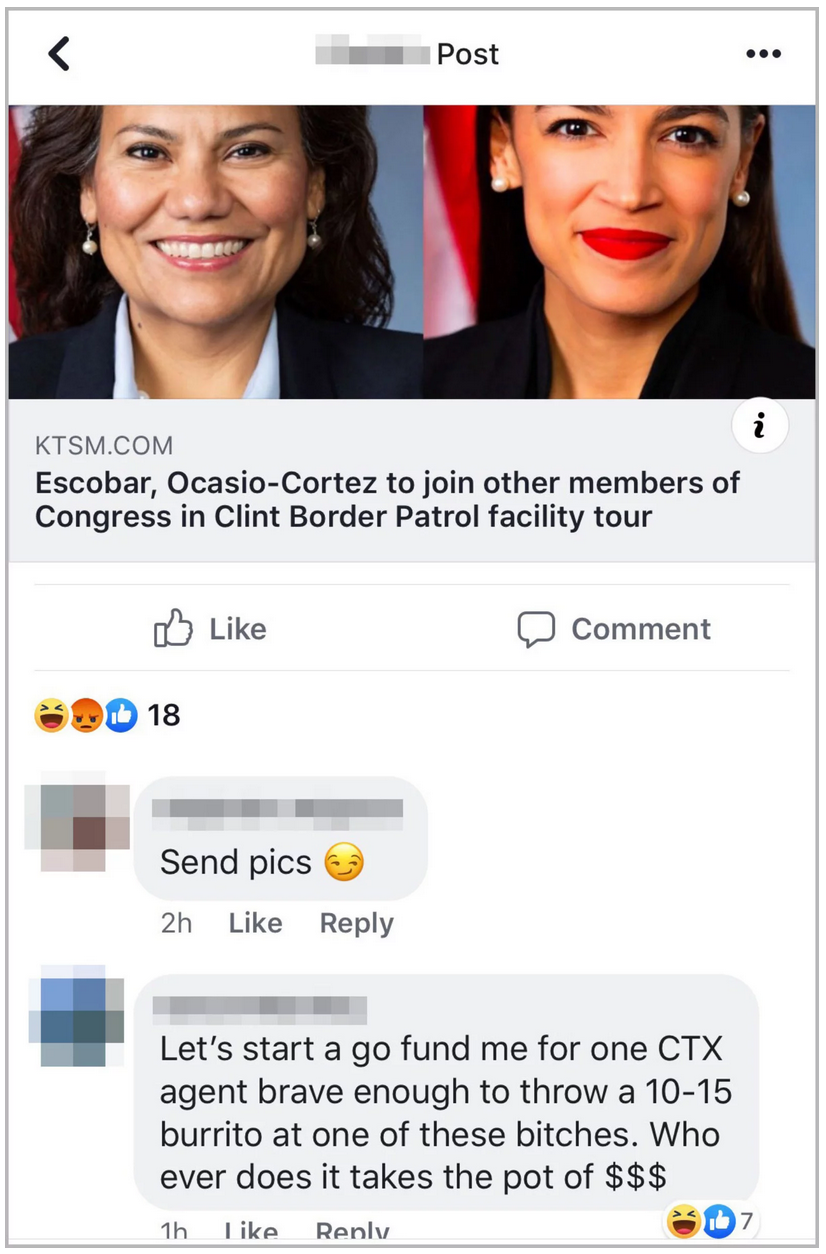 The group has some 9,500 members; recent reports put the total number of CBP officers at about twice that, so this would seem to be a popular group — but a secret one, visible only if you are invited. ProPublica verified that some of the postings they were sent were associated with accounts owned by officers.

The content apparently posted to the group (again, this can’t be verified without joining) is pretty vile. There’s dehumanization of detained migrant children — “oh well,” commented one member on a story about the death of one Guatemalan teen.

There’s incitement to violence — suggesting some agent “throw a 10-15 burrito at one of these bitches,” referring to Representatives Escobar (D-TX) and Ocasio-Cortez (D-NY). “Fuck the hoes,” concurred another.

There’s conspiracy — one post suggests the now-famous image of the father and daughter drowned in the Rio Grande is falsified, saying “We’ve all seen the dems and liberal parties doing some pretty sick things.”

One user posted a manipulated image showing President Trump forcing Ocasio-Cortez to perform oral sex on him. Like I said, pretty vile. Here as elsewhere, the outspoken congresswoman is a favored target for gendered abuse.

How on earth can CBP’s culture be trusted to care for refugees humanely?

PS I have no plans to change my itinerary & will visit the CBP station today.

I’ve asked CBP for comment and have not yet heard back from the agency. But it seems unlikely that, with potentially half the force members of the group, they could be completely ignorant of it or the type of content that’s being posted there.

This isn’t the only law enforcement group with hateful content out there by a long shot. The Plain View Project just posted a large database of posts it had collected from police department groups and accounts, and what’s visible there is more than a little troubling. Smaller exposures of concerning posts from individual departments or officers are commonplace.

It would be unfair to hold Facebook directly accountable for these ugly collections of xenophobic and sexist content. While objectionable, they are nevertheless both protected speech and at least in some cases not prohibited by Facebook’s terms of service. Furthermore as a secret group they are unlikely to be reported by a random user, so even violating content will remain up for longer than it might if it were posted publicly.

At the same time it’s also obvious that Facebook and other online platforms provide a venue for this kind of behavior and, especially with the suddenly rediscovered focus on privacy, it is difficult to prevent or detect. The same things that make it possible for an oppressed group to communicate undetected in a totalitarian country allows a totalitarian force to communicate undetected about that oppressed group.

But it only takes one dissenter or security flub to expose the whole operation or bring down the apparatus of oversight on it, as hopefully will be the case with this CBP group. No one begrudges an industry or group the ability to grouse privately about its unique challenges, and maybe even in a way others would find grating or inappropriate. Standards differ. But when it reaches a certain level, especially among a group we would like to hold to a higher standard of behavior, exposure and condemnation seems not only desirable but inevitable.