Snap on Wednesday announced its plan to soon launch a Creator Marketplace, which will make it easier for businesses to find and partner with Snapchat creators, including Lens creators, AR creators and later, prominent Snapchat creators known as Snap Stars. At launch, the marketplace will focus on connecting brands and AR creators for AR ads. It will then expand to support all Snap Creators by 2022.

The company had previously helped connect its creator community with advertisers through its Snapchat Storytellers program, which first launched into pilot testing in 2018 — already a late arrival to the space. However, that program’s focus was similar to Facebook’s Brand Collabs Manager, as it focused on helping businesses find Snap creators who could produce video content.

Snap’s new marketplace, meanwhile, has a broader focus in terms of connecting all sorts of creators with the Snap advertising ecosystem. This includes Lens Creators, Developers and Partners, and then later, Snap’s popular creators with public profiles.

Snap says the Creator Marketplace will open to businesses later this month to help them partner with a select group of AR Creators in Snap’s Lens Network. These creators can help businesses build AR experiences without the need for extensive creative resources, which makes access to Snap’s AR ads more accessible to businesses, including smaller businesses without in-house developer talent.

Lens creators have already found opportunity working for businesses that want to grow their Snapchat presence — even allowing some creators to quit their day jobs and just build Lenses for a living. Snap has been further investing in this area of its business, having announced in December a $3.5 million fund directed toward AR Lens creation. The company said at the time there were tens of thousands of Lens creators who had collectively made over 1.5 million Lenses to date.

Using Lenses has grown more popular, too, the company had noted, saying that more than 180 million people interact with a Snapchat Lens every day — up from 70 million daily active users of Lenses when the Lens Explorer section first launched in the app in 2018.

Now, Snap says that over 200 million Snapchat users interact with augmented reality on a daily basis, on average, out of its 280 million daily users. The majority (over 90%) of its U.S. users are 13 to 25-year-olds. In total, users are posting over 5 billion Snaps per day.

Snap says the Creator Marketplace will remain focused on connecting businesses with AR Lens Creators throughout 2021.

The following year, it will expand to include the community of professional creators and storytellers who understand the current trends and interests of the Snap user base and can help businesses with their ad campaigns. The company will not take a cut of the deals facilitated through the Marketplace, it says.

This would include the creators making content for Snap’s new TikTok rival, Spotlight, which launched in November 2020. Snap encouraged adoption of the feature by shelling out $1 million per day to creators of top videos. In March 2021, over 125 million Snapchat users watched Spotlight, it says. 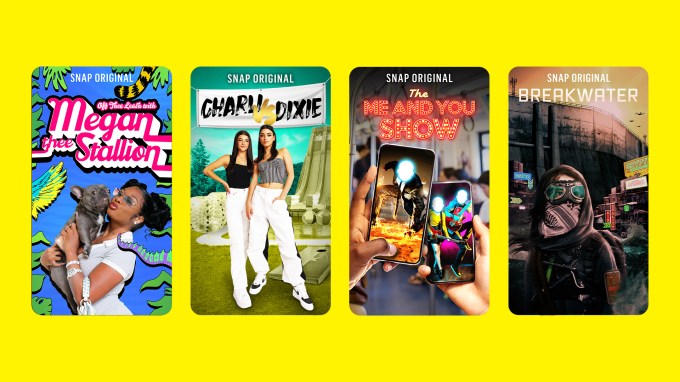 Spotlight isn’t the only way Snap is challenging TikTok.

The company also on Wednesday announced it’s snagging two of TikTok’s biggest stars for its upcoming Snap Originals lineup: Charli and Dixie D’Amelio. The siblings, who have gained over 20 million follows on Snapchat this past year, will star in the series “Charli vs. Dixie.” Other new Originals will feature names like artist Megan Thee Stallion, actor Ryan Reynolds, twins and influencers Niki and Gabi DeMartino, and YouTube beauty vlogger Manny Mua, among others.

“We’re happy to announce Snap’s Creator Marketplace, which will drive win-win-win opportunities for marketers, Creators, and Snap,” said Peter Naylor, Snap’s VP of Sales in the Americas, of the marketplace news. “For brands, it’s an opportunity to leverage the expertise of our network of AR Creators; for Creators, it gives them a way to further build a sustainable audience and business on the platform; and for Snap, it means more advertising partners can produce and execute compelling creative on Snapchat without the need for extensive resources,” he added.

Snapchat looks to maintain its own friendships — with devs