Snapchat brings back chronological Stories feed for some

Snapchat has undone its controversial redesign’s most significant change in an update to some users today. A tab that shows Stories in reverse chronological order, replacing the redesign’s algorithmically sorted feed for many people.

We’ve reached out to Snap Inc and haven’t heard back.

Showing the most recent Stories first makes them predictable and coherent to browse. It helps you see what’s going on with friends right now. That could be helpful if you wanted to find out which friends were free to hang out or if there’s a party you could join. 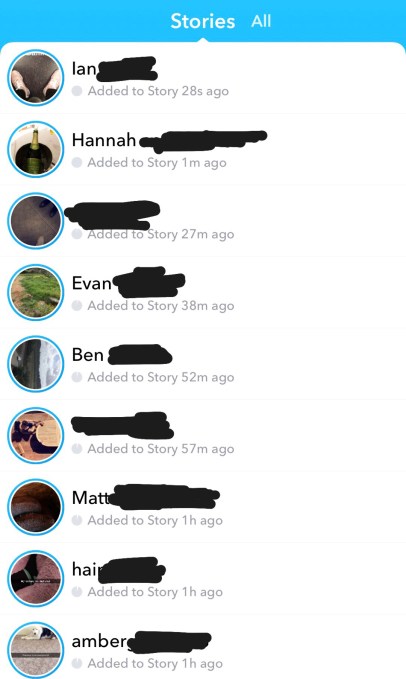 But reverse chronological order heavily prioritizes people who post frequently, which can bury your best friends. Snapchat’s move towards algorithmic ranking in its big redesign ensured that people you watched Stories from or chatted with most showed up at the top so you’d be less likely to miss their content. That’s similar to how Facebook’s feed worked for a long time, and how Instagram started ranking its feed two years ago. By moving social media stars and brands that don’t follow you back over to the Discover section as part of the redesign, there’s less noise in the chronological Stories list, so it works better than it did a year ago.

Switching to algorithmic sorting has helped Instagram and Twitter boost growth, which is likely why Snapchat made it part of the redesign. The company had seen daily active user growth sag from 17 percent to under 3 per quarter after the launch of Facebook’s Snapchat clone Instagram Stories. Snapchat saw growth improve after starting to roll out the algorithm-powered redesign in Q4 2017.

For the most hardcore Snapchat users who check it constantly, today’s update has been met with joy and gratitude. They were likely to see their closest friends’ posts no matter when or how infrequently they posted.

But ditching the algorithm could make it tougher for newer and less consistent Snapchat users who want to pop in and see the most relevant content instead of having to sort through distant acquaintances. That could inhibit growth. Essentially, Snapchat might have to decide between preferencing it’s most engaged and loyal users, or aiming to add more casual users.