Users in New York, Los Angeles, Chicago, San Francisco, Austin, Seattle, Philadelphia, Miami, Atlanta, Denver, D.C and London can find the new Layer in the upper-right corner of the Map and select The Infatuation to start finding restaurants near them. Once you find a restaurant that you like, you can share it with your friends via chat or add it to your favorites to save it for later and come back to it when you’re ready to make plans. 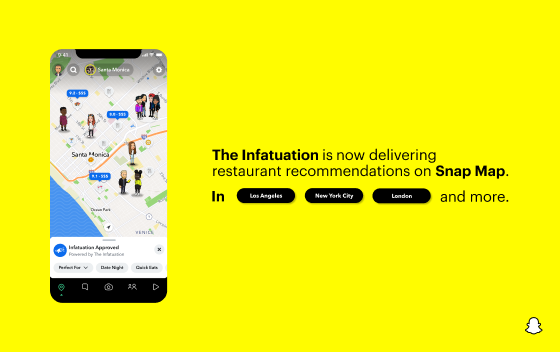 As part of the new partnership, users will now also automatically see The Infatuation reviews in Place Profiles in more than 50 cities around the world.

Snapchat says more than 250 million users turn to Snap Map each month to see what their friends are up to. The company launched Layers in Snap Map last year to create a new way for users to find things to do with their friends. The company’s Layers feature allows users to add data from some of Snap’s chosen developer partners directly to their map so they can see the world in a particular view.

Earlier this year, Snapchat partnered with Ticketmaster to launch a new way for users to discover live entertainment events within the Snap Map. The app now displays suggested upcoming shows based on your preferences that you can swipe left and right to browse through. The company sees this as a reimagined dating app that pairs users with interesting events as opposed to partners. Users are also able to browse through upcoming events at venues nearby through a new Layer on Snap Map.

The company’s partnership with Ticketmaster was the first time it integrated a partner to Snap Map through its Layers feature. Snapchat’s collaboration with The Infatuation marks its second partner for Layers.