Berlin-based Spark Networks, the owner of niche dating app brands like Christian Mingle, Jdate, LDSsingles, Silver Singles, JSwipe and others, today announced it has acquired Match.com competitor Zoosk for a combination of cash and stock. The deal values Zoosk at approximately $258 million.

Spark says it will issue 12,980,000 American Depositary Shares (ADS) to former Zoosk shareholders valued at $153 million based on the closing price of Spark ADS of $11.78 on June 28, 2019. The deal also provides for cash consideration of $105 million, subject to adjustment, which will be funded by a new $125 million senior secured credit facility, the company says in a release. 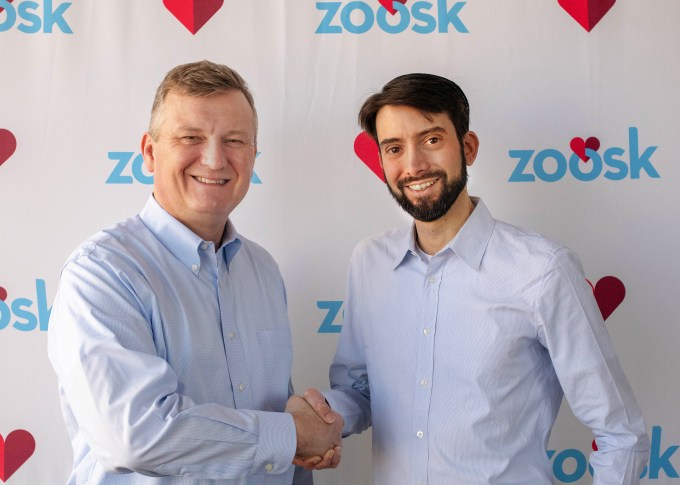 Plans for the deal were previously announced.

Following the closing of the merger, Spark has 2,601,037 ordinary shares issued and outstanding underlying 26,010,365 ADS, with former Zoosk shareholders collectively owning 49.9% of the combined company.

The Zoosk app, available in more than 80 countries, is a free download, but charges users who want to send messages and chat with other subscribers, similar to Match.

Zoosk has for a long time struggled to compete against Match Group and its top-ranking dating apps in the U.S., led by Tinder. A few years ago, the company laid off a third of its staff and even had to call off its IPO, as Tinder decimated its business.

Today, it lists itself in the App Store’s “Social Networking” category instead of “Lifestyle,” where Tinder, Bumble, Hinge and others rank, in an effort to gain more visibility.

According to data from Sensor Tower, Zoosk has generated worldwide in-app revenue of $250 million and has seen 38 million downloads since January 2014. Half of those downloads (19 million) are from the U.S., which also accounts for $165 million (66%) of the revenue.

In Q1 2019, Zoosk revenue was flat at $13 million, the firm also says. Tinder revenue, by comparison, grew 43%. And in Match Group’s latest earnings, it said its total quarterly revenue grew 14% year-over-year to $465 million.

Similarly, Spark Networks has also fought to gain footing as Match Group became an ever-larger force in the online dating market over the years. However, in the last year, the company saw its revenue grow 22%. But it still operates at a loss.

As a result of the deal, Spark says its global monthly paying subscribers will increase to more than 1 million. It also says it expects to achieve more than $50 million of adjusted EBITDA in 2020.

“Today’s closing represents a remarkable milestone in Spark’s continued evolution. Four years ago, we were a small German startup with no presence in North America. Our efforts over the last few years have created an NYSE-listed business with over $300 million in total revenue that is also the second largest player in North America. We are extremely proud of the company we have built, and are also excited by the future potential of our new portfolio,” said Jeronimo Folgueira, CEO of Spark, in a statement.

Zoosk’s current CEO Steven McArthur is departing Zoosk following the deal, but will join Spark’s board of directors.

“I have been very impressed by Jeronimo and his team during this process and I am very confident in their ability to execute the integration plan we prepared together, and make the new combined company even more successful, driving substantial value creation for all shareholders over the next 12 to 18 months,” said McArthur.

Spark Networks SE was formed by the merger of Affinitas GmbH and Spark Networks Inc. in 2017. It’s listed on the NYSE under “LOV,” and is headquartered in Berlin, with offices in New York, Utah and San Francisco.

In terms of other exec changes, Spark CFO Rob O’Hare is relocating to Zoosk’s HQ in San Francisco to smooth the transition. Herbert Sablotny, Spark’s former chief strategy officer, will also rejoin the company to assist in the Zoosk integration efforts, having previously done the same with the integrations of Attractive World and Spark Networks, Inc. Other key members of the Zoosk team are staying on as well, for the time being.

Match Group and Spark Networks SE aren’t the only dating app businesses that have taken a portfolio approach. Bumble’s owner in June said it was revamping its structure with the creation of Magic Lab, a holding company that includes its dating apps Bumble, Badoo, Chappy and Lumen. It also plans to boost spending to $100 million to better compete with Match Group and, soon, Facebook Dating.