Spotify announced today it will become the first music streaming brand to have an official presence within Roblox, with the launch of “Spotify Island,” a place where artists and fans will gather to play interactive quests, unlock exclusive content, and buy artist merchandise.

The new Spotify Island destination in Roblox will actually consist of a central mainland surrounded by a collection of themed islands, which players can explore and interact with by walking, running, and jumping, and touching and picking up various objects. The worlds themselves feature a color palette centered around Spotify’s shades of greens, with oranges and purples mixed in.

There’s also a musical play box in the top right corner of the world, which will feature a soundtrack powered by Soundtrap, one of Spotify’s audio creation tools. The music here can be played or paused, or players can skip tracks, the company says. 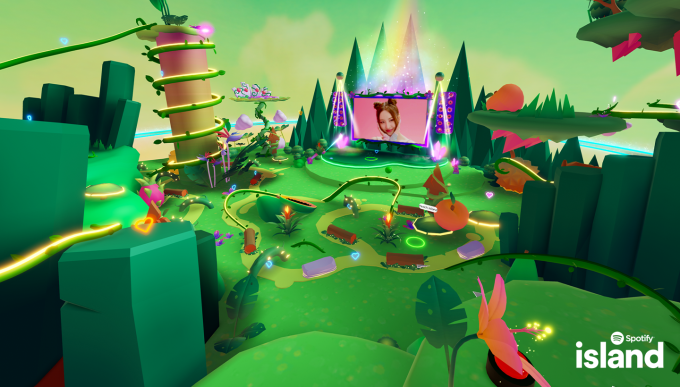 An in-game merch store, meanwhile, will feature a variety of exclusive Spotify merchandise that can be taken into other parts of Roblox, as well as special artist merchandise which will serve as an additional revenue stream for creators. Spotify says artists will be able to keep Spotify’s portion of those merch sales (less Roblox’s cut) and Spotify can help with the merch design, if need be.

Initially, four free items can be unlocked by completing missions around Spotify Island, by doing things like playing sounds within the world’s crystal cave and on a trampoline, or collecting the musical notes sprinkled throughout the island. 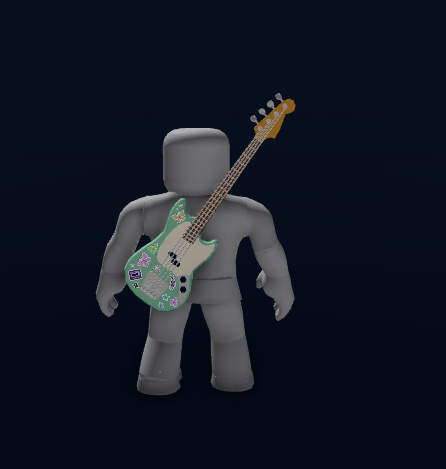 There are also little hearts around Spotify Island that can be collected to unlock hidden easter eggs. For instance, one easter egg will change the island from daytime mode to nighttime for the individual player. They can then pick up the glow sticks on the ground to leave light trails behind them as they run around. A leaderboard will track the hearts collected by various island visitors.

Spotify’s vision for the island is to turn Roblox players into creators themselves, the company says. At launch, it’s doing this by having players create sounds at its virtual beat-maker stations powered by Soundtrap, and by moving around a “stage” area where they can interact with items like a confetti cannon and bubbles, effectively becoming performers themselves. But in time, the company plans to expand on this experience it said without going into specific detail. 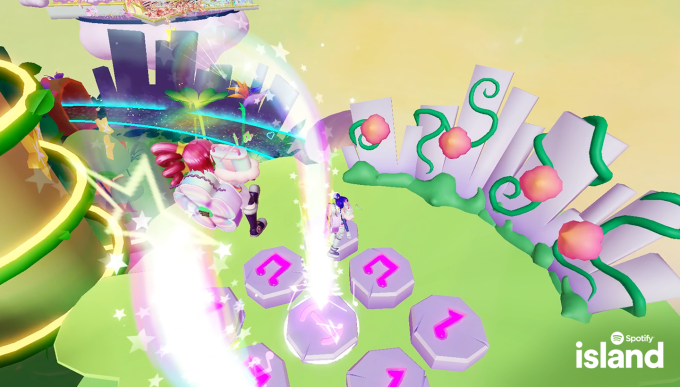 “The stage isn’t the typical artist broadcast to fan experience. We’re flipping the script and empowering players to be the creators and truly feel like they’re the artist performing,” noted Abby Stewart, Director of Business Development at Spotify.

Spotify also says the island will continue to evolve with new worlds to explore focused on music and fandoms. The first of these will be K-Park, a custom-built experience designed as an homage to Kpop culture. The first two artists to activate in this space are Stray Kids and Sunmi. The latter will have Roblox merchandise available starting today, while Stray Kids’ merch will arrive in the weeks ahead.

The launch of the Roblox world comes at a time when music has become an important competitive advantage for online gaming platforms as they position themselves as a future entry point to engage with the “metaverse.”

Fortnite helped kick off the trend with its in-game Travis Scott concert in 2020, followed by its Ariana Grande concert last year, and its more recent collection of Coachella-themed items and music aimed to celebrate the festival on its platform. Roblox, meanwhile, also held its first virtual concert in 2020 when it hosted Lil Nas X in an online event space custom-designed with multiple stages inspired by the artist’s music. And last year, Roblox solidified its intentions to bring more artists into its online gaming worlds with the announcement of a partnership with Sony Music, aimed at helping artists reach fans within Roblox and make money.

Spotify, which already hosts over 2.2 million gaming-related playlists, said it saw the potential to reach a younger generation of music fans with the launch of its game experience on Roblox. According to a Deloitte survey, it cited, more than 80% of people in the U.S. played games, and Gen Z gamers were averaging 11 to 13 hours per week engaging with their favorite titles. 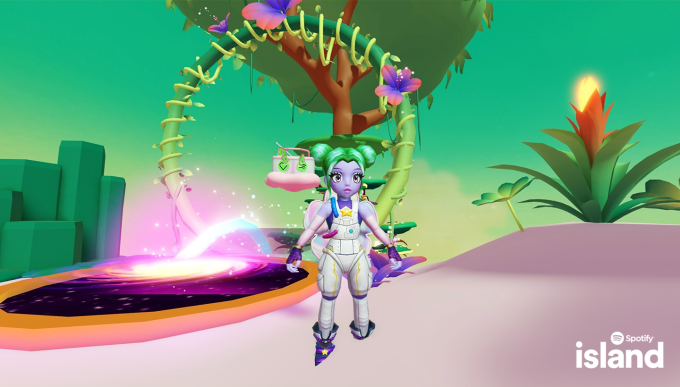 “We want to meet this next generation of gamers where they are, while opening up new opportunities for fans and artists to engage in play,” said Alia Calhoun, Global Head of Partner Marketing, in a demo of the Roblox world to select press on Monday.

While Spotify Island may be able to attract various fan bases who follow their favorite artist to the world to pick up some Roblox swag, the lack of any virtual concert news alongside the announcement is a bit of a letdown. That said, Spotify seems to have planned for concerts to arrive at some point given it’s built a stage with a big screen behind it. But when asked directly about its plans the company declined to share more than this. It only said Roblox users should “stay tuned” for special programming in the future.

The new Spotify Island experience is live now in Roblox at Roblox.com/Spotify. On Spotify itself, there’s also a new playlist called Spotify Island on Roblox to stream.