While small- and medium-sized (SMBs) businesses are the bulwark of the economy, driving up to 44% of activity in the U.S. alone, it can be hard for sales teams to get an accurate picture of them. That’s because they’re often too small for data providers to monitor and — more often than not — are stretched thin. A recent Gartner survey showed that SMB buyers spend only 17% of their time talking to vendors, making winning the business of SMBs a challenge.

Leetal Gruper sought to make it simpler with Leadgence, a startup that collects and analyzes publicly available data on SMBs to generate insights for sales teams. Rebranding as Tarci today to coincide with the close of a $17 million Series A round, the company provides real-time updates on SMBs, including changes in ownership, negative customer reviews and company growth.

“Tarci was founded in 2019 by Sergey Bahchissaraitsev and I. We partnered to build a solution that would aggregate the massive amount of publicly available data and, most importantly, use AI to understand the signals that merited action,” Gruper told TechCrunch in an email interview. Gruper was previously a senior Bain consultant and the head of sales and retention at Worldpay, while Bahchissaraitsev was a data engineer at app monetization platform Supersonic and the co-founder of several startups, including online hiring tool Emeraldo.

Gruper says that Tarci uses natural language processing algorithms to make sense of structured data (i.e., data in a predictable format) and unstructured data (data that doesn’t fit a predefined convention) about SMBs from various sources across the internet. Data collected by the platform is used to train AI systems customized to particular industries that the SMBs occupy, which drive insights about the SMBs.

Gruper gave an example. When a restaurant plans to open a new location or a manufacturer starts exporting to a new country, they typically won’t issue a formal announcement, she explained. Instead, they’ll leave “breadcrumbs” as part of the ordinary course of business, like an application for a regulatory license, job board listings, or a ‘Coming Soon’ announcement on their websites. Tarci’s AI attempts to collect these breadcrumbs and compile them together, creating signals that the company is undergoing some observable change.

SMBs that would rather not have this sort of data scraped by Tarci can opt out at any time, Gruper said. 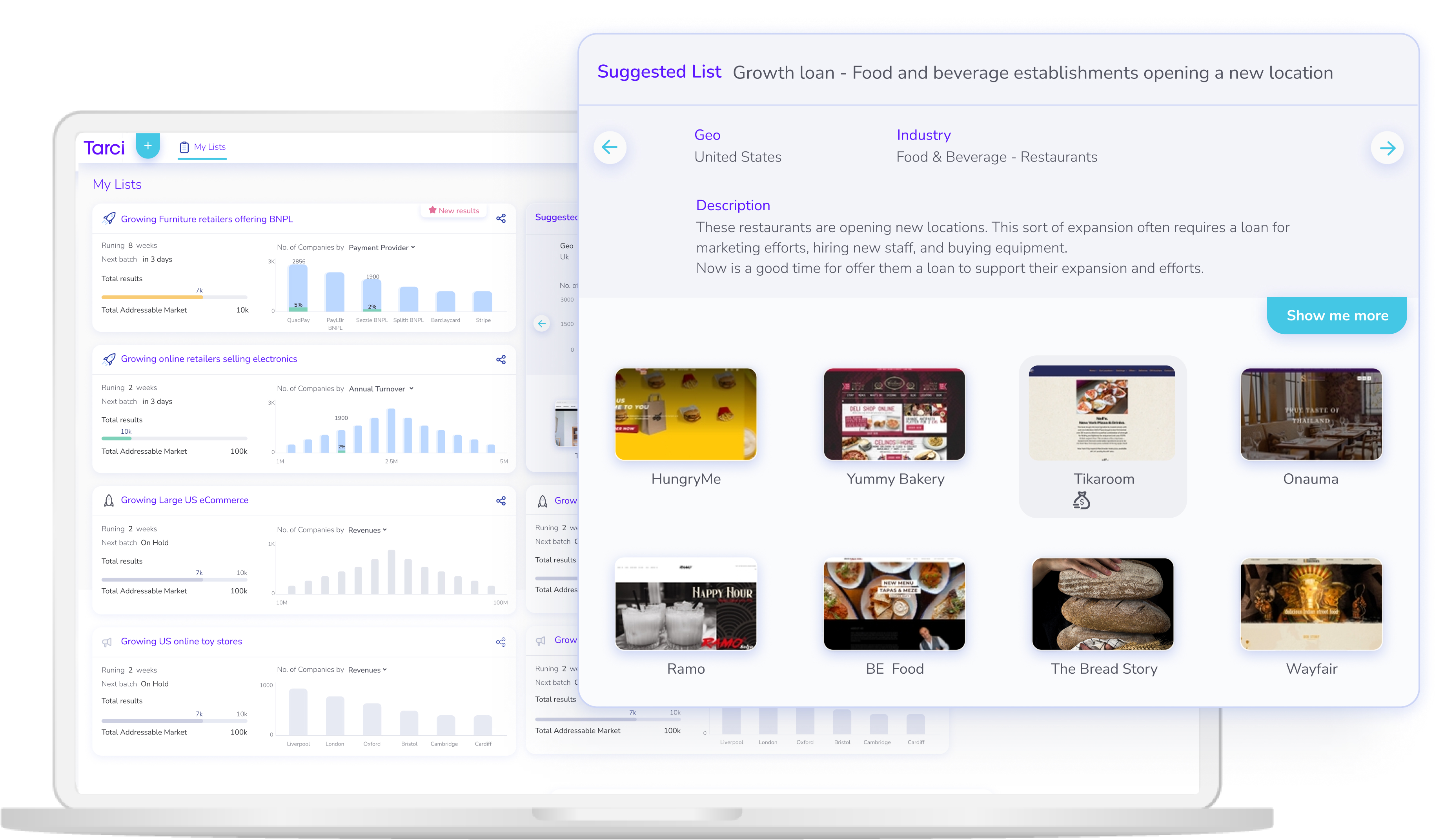 “Maximizing time is essential in the fast-paced world of small and mid-sized businesses … Inspired by the nocturnal, visually keen tarsier primate, we give our clients the superpower to ‘see in the dark’ when others can’t,” Gruper said. “In a sea of very poor, outdated and basic data about SMBs, moving to a real-time and forward-looking view enables decision-makers to utilize this information with their marketing, sales, credit, know your customer and success teams.

Tarci’s customers include Bluevine, Tipalti and Payoneer, as well as “leading” insurance companies and banks; Gruper sees the startup competing against traditional sales intelligence vendors like Dun & Bradstreet and Moody’s Analytics. The difference, she argues, is that Tarci’s approach is real-time and mostly automated, putatively reducing the time to close.

Of course, it must be pointed out that Tarci isn’t the only AI-powered sales tool vendor going after the SMB space. There’s Apollo, which offers an all-in-one sales enablement platform to find prospects from a database of hundreds of millions would-be buyers. Lusha hosts a similarly massive crowdsourced database of sales professionals and sales organizations, while platforms like Crunchbase are layering intelligence on top of their buyer datasets.

Gruper asserts that Tarci will continue to differentiate itself by building new products, strengthening its current data capabilities and expanding into new industries.

“Ultimately, we are building a new solution that will help both SMBs and companies that sell to SMBs succeed,” she said. “Given the broader economic slowdown, companies need to be more judicious than ever with spending. Tarci provides a solution that drives cost-effective results. Our existing customers have also started turning to us for new use cases such as churn reduction — SMBs are going bust and creating churn — and monitoring of existing customers for real-time risk purposes.”

Sound Ventures led Tarci’s Series A with participation from Liberty Mutual Strategic Ventures, Global Founders Capital and unnamed strategic investors. The company has around 30 employees across Israel, the U.S. and the U.K. (Tarci is based in New York) and is actively hiring, according to Gruper.

When reached for comment, Sound Ventures managing partner Effie Epstein added in a statement: “There are more than 54 million SMBs across the U.S. and Europe, and collectively they spend $1.2 trillion on technology, financial services and insurance. SMBs represent a massive market, but the unit economics of enterprises selling into SMBs are often poor, driven by high customer acquisition costs and low lifetime value. Tarci’s … engine provides real-time, actionable data to enterprises, enabling them to sell, upsell and retain their SMB clients more efficiently, thereby improving those underlying unit economics.”