Tiger Global has led a new funding round in Jar, the Indian fintech that is helping millions of Indians save small amounts to invest in digital gold as the startup gears up to launch a host of new offerings including insurance, mutual funds and lending.

Jar said Thursday it has raised $22.6 million in its Series B financing round. The funding values the one-year-old startup at over $300 million, it said, and saw participation from Folius Ventures, Panthera Capital, Prophetic Ventures, Yes VC, WealthFront founder Adam Nash and Founders Fund principal Zachary Hargreaves as well as early-backers Arkam Ventures, Rocketship.vc and WEH.

TechCrunch previously reported the early deliberations of the round. The Bengaluru-headquartered startup, which has raised over $58 million to date, is engaging with a few investors and may add another few million dollars to the round, two sources familiar with the matter told TechCrunch.

Even as banks in India have opened a billion accounts for citizens in the South Asian market, a significant number of individuals don’t maintain any savings. In the event of an unplanned expense or emergency, many are forced to rely on friends and family or shark lenders for capital injection.

Part of the reason why so many Indians never save or invest is confusion, explained Nishchay AG, co-founder and chief executive of Jar, in an interview. “Should they invest in mutual funds, stock market, crypto, various schemes from banks? The choices are aplenty as the world around them is littered with ads,” he said.

Jar is removing the pressure by giving people an asset class that Indians can relate to: gold.

(To say Indians, who have a private stash worth $1.5 trillion of the precious metal, have a fascination with gold would be an understatement. For generations, Indians across the socio-economic spectrum have preferred to stash their savings — or at least a part of it — in the form of gold. In fact, such is the demand for gold in India — Indians stockpile more gold than citizens in any other country — that the South Asian nation is also one of the world’s largest importers of this precious metal.)

A familiar asset class is part of the solution. Jar’s other value proposition is just how easy it has made it for its users to save and invest. On its eponymous app, the startup allows users to choose from different savings options such as roundups – where the nearest round number after a transaction gets saved automatically, as well as setting recurring savings amounts and performing one-time execution, explained Misbah Ashraf, co-founder of Jar.

Jar has rapidly gained traction since launching the product a year ago. Its app has amassed over 9 million registered users and each day it is clocking over 220,000 transactions, it said. The startup, which is seeing an average monthly growth of 20%, is also spending far less on attracting new users: less than $1.5 per user, it said. 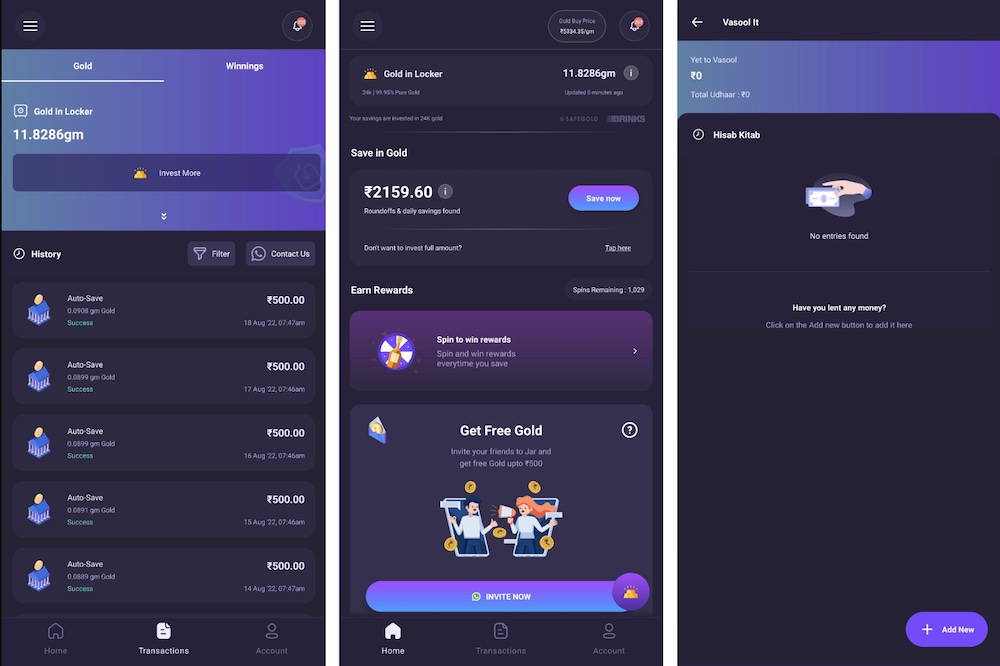 Jar’s eponymous app. The startup also lets users keep a track of who all they have lent money to, and send them reminders.

“By starting with digital gold, a well-understood and well-loved asset class in India, Jar’s savings app has quickly gained trust and traction with young earners interested in developing a saving and investment strategy,” said Alex Cook, Partner at Tiger Global, in a statement. “We are impressed with the company’s rapid growth and are excited to double down as they expand into new asset classes.”

The startup, which employs about 90 people, is now gearing up to broaden its offerings. “We are working on building the most ubiquitous and contextual platform to help people navigate the financial options without getting intimidated,” said Nishchay.

Jar, which is also looking to hire another 50 people, is developing and testing secured and unsecured lending, mutual funds, fixed deposits, peer-to-peer loans, and insurance, he said. The startup plans to roll out these new offerings in the coming quarters, he said.

Misbah, whose inspiration to starting Jar was his family’s personal struggle with finances, believes that Jar has been able to help people build a habit of financing savings. These customers, most of whom he said live in small cities and towns of the country, “are now ready to explore evaluating other instrument options,” he said.

India has become a key fintech hub in the past decade as scores of banks, startups, and other institutions have raced to tap what many believe is the last great growth market.

For years, local legacy banks and mutual funds have been trying to tap India masses with their products. But their non-personalized offerings and over-reliance on local credit bureau’s books have cut their customer base to just 30 million individuals.

“Manufacturing a product is one thing and being able to sell it is another. All these institutions are good at manufacturing. For selling, you have to be aligned with the individual’s persona, idiosyncrasies, insecurities, cognitive load and the cultural significance. That’s an art and science by itself,” said Nishchay in an earlier interview.

“Jar’s growth story would be incomplete without the mention of the guard rails that have preemptively been put in place to make growth a controllable output versus it an incomprehensible vector. The company has an equal measure of thoughtful execution as well as a high standard of transparency where stakeholders ranging from employees, partners, and investors are fully aware of key initiatives and priorities. We are sure this approach is helping create a sustainable company with a predictable growth trajectory,” said Rahul Chandra, Managing Director of Arkam Ventures, in a statement.